You are here: Home / Book Excerpts / Excerpt From Chasing A Miracle by Eliot Hartford Bailey @EliotHBailey 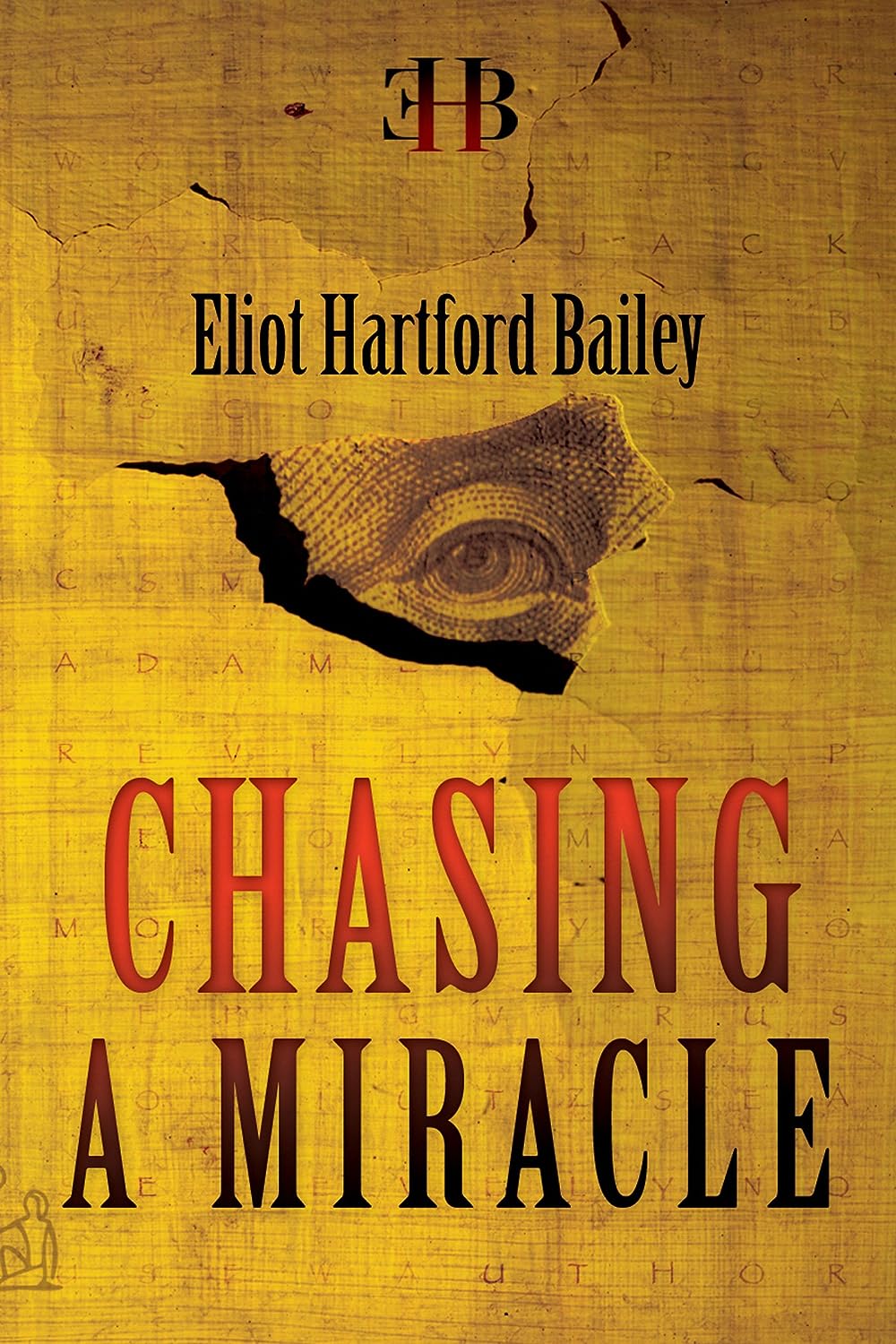 About your Book:
Have you ever wished for a miracle? Come on now. Of course you have. You know you have. For, which of us on this planet, atheists included, has not at one time or another, and with the heart of a beggar, pleaded, entreated, prayed, even bargained for a miracle of one sort or another to be granted, whether for ourselves or someone else? Now, let us never confuse miracles with magic. Magic is just that – hocus-pocus, fake, sham, not real, no matter how impressive and baffling. Again, let us not confuse miracles with favours – favours from the Almighty and favourite saints, all part and parcel of the popular novena culture of Catholics, and prayed for daily by the faithful for receipt of all manner of personal intentions. Nor are we talking the “Wow! How did that happen?-It’s-gotta-be-a-miracle!” kind of miracle. No, no, no. At the risk of sounding redundant, we’re talking real miracles here!
But, Dr. Adam Bell is surely not confused. Oh no. As Chief Investigator, he knows the difference only too well. After all, ‘miracles’ are his official business at the Bureau of Scientific Scepticism (B.O.S.S.), and his good nature and intellectual curiosity soon cause him to delve more deeply than required into the anatomy and character of miracles – all in keeping with the bureau’s secret agenda. This happens not a moment too soon as it turns out, when without warning his own dire need for a miracle transforms his usual impartial, objective, routine work with the federal government bureau into an inordinately personal, life-and-death chase. Adam is also, of necessity, himself inherently transformed from the quiet, plodding, somewhat hesitating investigator, unused to police work, into a man on a mission, a father-to-be with a cause, where time is of the essence, and there’s no room for error… Join him in the chase of his life!
To learn more visit eliothbailey.com

Looking out the window, Adam sighed as the plane started its descent.

“Going home?” asked the gray-haired woman next to him.

Thankfully she’d been asleep most of the flight. Small talk was fine, but inevitably, he’d have to lie at some point. He never got used to that part of his job. Fortunately, he didn’t have to make the usual chit-chat about the purpose of his trip, spouting falsities about a relaxing vacation or a business meeting with foreign investors. He couldn’t tell her the truth about what he was really doing. He doubted anyone would have believed him anyway.

“Yeah. Home.” It would be good to go home, Adam thought. But home was a long way off. His report was due as soon as he landed. And in all likelihood, they’d want to debrief him, too. Easily another couple hours and by then the house would be dark and his wife Evelyn would be sound asleep.

Adam rubbed the slight stubble on his cheek as he overlooked the wistful purple and blue clouds in the night sky. He was still staring out the tiny window when the sparkling lights appeared beneath the clouds: DC shone in the distance.

It hadn’t been a long trip this time, nor very far. All the same, he was anxious to get back.

Guided by the small flashing lights along the runway, the plane landed smoothly on the jet-black tarmac. A few passengers clapped, including the old lady next to him–a round of applause for the captain. Adam smiled to himself.

“You just never know,” she said, shaking her head with relief. “Happens all the time. One minute everything’s fine, and the next…” she trailed off. “Thank God we had a safe flight.”

“For sure,” Adam said, smiling to himself. For them, he supposed, this was a modern miracle. A gigantic metal eagle had carried them safely to their destination. Another successful trip concluded, and without incident; they were back safely on the ground.

Adam’s smile faded, as he returned his gaze to the darkening sky outside the window. Life would be easier if he could believe in the mysterious work of an omnipresent universal force, the same way that his fellow passengers did. But, this wasn’t a miracle. It was science, coupled with the pilot’s training and skill.

He’d seen a true miracle. Several, in fact. He investigated and researched unexplained occurrences, so it wasn’t exactly seeing the impossible firsthand but pretty damn close. He’d also seen the other kind, too. Hoaxes, shams, illusions–they were far more common than the real thing.

A miracle isn’t a miracle until it’s proven; Adam’s mantra echoed in his head. For most, it was easier to see what they wanted to believe in, rather than the cold hard clinical truth that Adam focused on. For him, looking at reality head-on was a way of life. Until a miracle is proven, it’s simply a claim, a belief, a hypothesis to be investigated. Of course, disproving a hoax is far simpler than proving a genuine act of divine intervention. But Adam hadn’t been chosen for the position because the job was easy. Miracle investigator–there was no college course or internship offering training in his field.

Of course, part of the issue is that ‘miracle’ is a murky term. Every day, mundane events are passed off as ‘miracles’. People casually exclaim a miracle when describing moments of good fortune, events that can be chalked up to luck or coincidence. Finding a set of keys lurking behind the sofa cushion, despite checking in that spot three times before–not exactly a miraculous discovery, but people still call it exactly that. However, these rarely registered with the Bureau.

Buying a lottery ticket and ‘mistakenly’ using the wrong number, which leads to an accidental win. More likely good luck, maybe coincidence. Miracle? Not usually, though these were sometimes enough to become a blip on the radar at work. Still, Adam was grateful when they’d stopped assigning so many lottery ’miracles’ six months ago.

On a sliding scale, a habitual lottery ticket purchaser winning a small amount of money isn’t noteworthy. But, Adam had investigated all manner of stories up and down that scale. Moving a few notches along, he’d heard better ones. Tales of convenience store clerks getting shot in the heart by thieving gunmen, only to narrowly miss their vital organs. Or–better still–a bullet stopped by a wallet in their pocket. Or–even better still, Adam’s case last month in France–the shot stopped by a Bible in the victim’s pocket. Miraculous? Perhaps. It depends who you ask. Rarely do people agree, depending on their faith or their skepticism.

And who decides what is or isn’t a miracle? Governments? The church? The people? Adam went into his current position knowing he was working in a gray zone. They’d brought him on board, tasked with making it black and white. Miracle or not. Debunk the hoax or prove divine intervention.

And he did. Examining each situation with a skeptical, scientific eye. If science couldn’t explain it, then that’s when he looked up–to a higher power.

Adam’s eyes shifted upwards to the seat-belt sign in the cabin. Still on. Screw it, he thought, pulling out his cell phone.

“Hello?” A sweet voice answered on the other end.

“Evelyn.” Adam practically sighed in relief. “We’re on the ground.”

“That’s great. How was your trip?”

“Seemed long. How are you feeling?”

“Same as this morning, really. Tired, a little hungry, but too nauseous to eat much.”

“I thought the morning sickness was supposed to stop after the first trimester?”

Gathering his carry-on, Adam slipped seamlessly into the aisle amongst the other passengers disembarking the plane, without a pause in the conversation, filing inside a cramped tunnel to the terminal.

“I’m sorry. I just wish I was there. That there was something I could do.”

“Not for too long. But yeah, I’ve got to file my report.”

“I’ll probably be in bed when…”

“I know. I’ll try to be home soon. I’ll be there when you wake up,” he said, eyeing the customs line up ahead. “Love you.”

Eliot H. Bailey was born on Wednesday August 10th 1983 at 3 a.m. on the beautiful Caribbean island of St. Lucia – an island that has produced two Nobel laureates, one in Economics and the other in Literature. His parents, both educators, have devoted their lives to teaching the arts.  Eliot was named after T.S. Eliot – “one ‘l’, one ‘t’” – as he was wont, from the tender age of eighteen months, to inform all and sundry who might ask his name. Growing up, Eliot was a curious child who started talking when he was about ten months. He asked questions galore and spouted creative ideas. Growing up on the paradise island of St. Lucia he crossed paths with many a celebrity; having the opportunity to meet Oprah in person during his younger years was actually quite an inspiration for him. Being British (as well as St Lucian), he would spend his summers back in his father’s homeland of England visiting family and, in his teens, chose to live there on his own for a year.  It was during this time that he was moved to chronicling his days and jotting down his thoughts on life and the parade of characters that crossed his path.  Much of this writing was done on the spur of the moment as he sat in train stations or on park benches. Looked upon as intelligent and insightful, from a young age, Eliot soon displayed an acute business sense and a facility for negotiating, marketing – and storytelling.  His lively author’s imagination today may very well have had some of its genesis in the various prize-winning costumed characters which he depicted so convincingly on stage from the age of eighteen months, at the annual Mardi Gras Kiddies Carnival competition in which his mother faithfully entered him. He was variously Robin Hood, Dick Whittington, Batman and a host of other characters.  After turning down an offer to model in the UK – Eliot started his own business at twenty and ever since has worked either for family or for himself, all the while meticulously growing his ideas. Currently, Eliot Hartford Bailey is co-owner and Managing Director of the #1 tour company in St. Lucia, ‘LucianStyle’, and works daily to ensure that visitors to his beautiful island enjoy their time to the fullest when they enlist his services. It is for this very reason, he believes, his company holds the #1 spot on tripadvisor.com.  From early on, Eliot seemed to catch his mother’s fascination for magicians and illusionists, but as the years went by, he did one better.  After experiencing first-hand what can only be classed as a couple of supernatural encounters, his fascination graduated to the real thing: miracles!

Chasing a Miracle is the first in a series of books to be released by this eye-catching new author. Hold on to your seats!