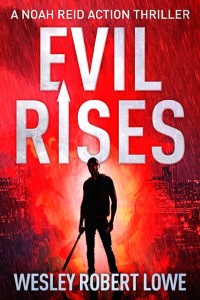 What Inspired You to Write Your Book?
As a product of East and West, I love great stories that combine cultures. Like many, I want fast action but I’m not interested in thrills for thrill’s sake. I want something with rich characters and plots and that’s what I try to write.

How Did You Come up With Your Characters?
One of my good friends in a Shaolin Grandmaster and his character is the source of both the evil and good. The lead character, Noah Reid, is somebody I wish I was – smart, vulnerable, handsome… and one kickass mother!

Book Sample
There was a tiny village nestled in the craggy mountainous terrain of the Fujian Province. Because it was so hard to get to, civilization and Communism didn’t pay too much attention to it. People were farmers, grew rice, tea and sugar cane, but no one was rich. After all, farming in an area that was “eight parts mountain, one part water and one part farmland” was not a recipe for economic success. Most of the villagers lived in one of the several tulou, or giant earth huts, each of which housed about one-hundred-fifty members from a family clan. Life was simple and sleepy.
But that didn’t mean it was boring. People delighted in fishing in the small rice paddies or singing Chinese opera with a whiny, nasally twang. In the last couple of months, a backsliding Shaolin martial artist appeared. No one in the hamlet knew his real name but, with a daily consumption of at least two of the most wicked and foul-smelling bottles of moonshine this side of the Pacific, it was easy to see how he got the moniker of “the drunk.”
Everyone called him that.
Everyone, that is, except for twelve-year-old Wudan. To Wudan, the drunk was a man of exceptional power. After all, he was a martial arts master who could break boards with his head and leap almost five feet from a standing position. Rumor had it that the drunk never had to buy food because he hunted bears and wild boars, killing them with his bare hands.
For the few moments he was sober, it was obvious from the way he talked that he was a man of exceptional learning. His knowledge of Scriptures was phenomenal, and he must have been part of an exceptional monastery.
But when he left, he really left. No more ascetic life for him. The drunk drank too much, partied too much and womanized too much.
And one more thing: he was one helluva martial artist, and that’s what fascinated Wudan.
The village tough tried to hit on a very cute seventeen-year-old peasant girl and, when she resisted, he slapped her to the ground.
“That is not allowed,” yelled the drunk as he dispatched the hooligan with a rapid fire combination of fists and legs to the hooligan’s head and torso.
“Do it again,” cried Wudan, who had also been the bully’s victim.
The drunk beckoned the wannabe bruiser to come at him. “Come on, come on, come on, you fat, stupid and ugly warthog.”
Incensed, the would-be warrior pulled two knives from his pockets. Waving them in the air, one in each hand like a windmill gone berserk, he flew at the drunk, screaming, “You useless old man. You have insulted me for the last time.”
The drunk stood his ground. When the punk arrived, the apostate monk quickly jumped into the air. To Wudan, it seemed like the drunk leapt higher than a house. As the drunk descended, he kicked at the thug’s legs and the swirling knives, knocking them out of the punk’s hands.
The drunk landed behind the young man, who whipped around and challenged the monk to battle.
The drunk merely rolled his eyes as the fool charged at him.
At the last possible millisecond, the drunk stepped aside and delivered an elbow to the head of his assailant.
The attacker buckled, and then the rest of the tough’s gang showed up.
It was comical and pathetic to watch this drunken martial artist as he dispatched the three gang members so easily.
The drunk belched, then swished his arms to the pose of a Tiger and leapt at his first attacker. Two hammer fists later, the thug lay sprawled out on the ground.
As the next victim rushed at him, the drunk spread his arms out like a Crane with a huge wingspan. When the dupe arrived, a quick clapping of the drunk’s arms together on the temples knocked his prey out.
Seeing their comrades so easily dispatched sent the rest of the gang running in retreat.
“Teach me, Sifu. Teach me everything,” cried Wudan.
“Not now. Maybe not ever. I’m busy.” The monk pinched the bum of the young girl now deserted by the gang. She, like Wudan, was also captivated by the performance.
The girl tittered and gave the monk a kiss. He looked at her very seriously. “Hung Gar, the Tiger and Crane system, has other ways to be useful. Do you want a personal private demonstration?”
The girl nodded enthusiastically and locked her arm in the drunk’s.
The monk winked at the boy. “If you want to learn, I cannot teach you. You must go to the ends of the Earth. You must go to Heaven.”
The boy began to cry. “I’m too young. I don’t want to die to learn these tricks.”
The monk released the girl, dashed up and grabbed the boy. He tossed him ten feet in the air, then ran and caught him.
The monk slapped him. “These are not tricks. This is part of the Way. Anyone can beat someone else up, but to truly be a master of the Shaolin, you must dedicate yourself to training, to the life of Heaven. Heaven is not a place where you go when you die. It is a secret monastery in the Yellow Mountains.”
“How do I find it?” Wudan asked.
“You must go to Shaolin Paradise in Shanghai.”
“And they will teach me there?”
“No,” said the monk. “That is the start of your journey.”
“I have never been anywhere but our village.”
The monk nodded. “To get to Heaven will be your first lesson.”
“Then I will go to Shanghai.”