You are here: Home / Faith and Religion / Devotionals / Everyday Apologetics: A 100 Day Devotional Journey in Defending the Faith by Stan Lewis 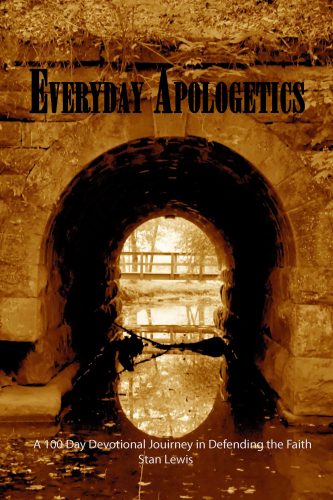 Everyday Apologetics is a 100-day devotional book that introduces the reader to various concepts in defending the Christian faith. This book is designed to be read daily, and the short devotional thoughts are meant to challenge the reader in their understanding of apologetics while encouraging the reader in their daily walk as a Christian. Everyday Apologetics is designed to be an easy to read devotional which promotes the concept that apologetics is for every believer and can be used every day in our walk with Christ. This book can be used for personal devotion or can be a helpful gift for anyone who is struggling to defend their faith or are needing effective and compelling reasons for the validity of the Christian experience.

What Inspired You to Write Your Book?
Through my years as a minister I have encountered many Christians who are intimidated by the subject of apologetics. I want to help bring apologetics back to the level where it belongs – not an "intellectuals only" discipline but one for every believer. I also have encountered many Christians in countries that are hostile to Christianity and they had no idea how to defend the faith and I hope that this book can be a resource for them.

People do not despise a thief, If he steals to satisfy himself when he is starving. Yet when he is found, he must restore sevenfold; He may have to give up all the substance of his house. Proverbs 6:30 – 31

We live in a world that’s obsessed with stuff. Whether it’s the materialistic consumeristic madness of the West, or the roiling jealousy of the third world masses toward those who have more than them, the world is burning up with a fever for possessions and protecting the things that they claim as theirs. Because of the materialistic insanity that grips the world, those who resort to thievery are singled out for particularly nasty disdain and punishment. The Code of Hammurabi said to kill thieves, the Romans crucified thieves, Islam encourages society to cut off a thief’s hand, in the Western world thieves are often given lengthy prison sentences, in India stealing is often dealt with through mob justice where a robber is often beaten and sometimes lynched, and in China theft has been often punished by lethal means. All of this serves to remind us that in this world, possessions are often viewed as having greater value than people.

The God of the Bible, however, has a different view of thieves. The system of punishment and restoration of thieves in the Bible is much different from what we see in the world today or at any time in history. In both the Old and New Testaments, those who stole weren’t singled out for harsh punishment but were made to pay back what they had stolen and treated redemptively and with grace. Adam and Eve were thieves who stole from a Tree to be like God and they were shown grace. Zacchaeus was a government-sanctioned thief (a tax collector who was protected by the Romans) who climbed a tree to gain a glimpse of Jesus. The people of Jericho, from whom he had stolen much, no doubt wanted the Lord to scorch him into oblivion for his pilfering, and yet he received grace from the Lord upon his repentance. Then there was the thief that the Romans hung on a tree next to the Lord, and while he was powerless to save himself and the world called for his blood for taking property, the Lord gave him the greatest possession he could ever receive and could never steal – unmerited salvation.

Only God could conceive of a plan for saving the world using the very instrument that brought sin into the world – a tree. Our works, efforts, religiousness, and goodness are merely the attempts of thieves to steal heaven and salvation when God offers it to us freely. All we must do is die to our thieving ways and accept the gift that the Lord, who loves and died for a world of thieves, offers to us.

Buy Everyday Apologetics: A 100 Day Devotional Journey in Defending the Faith On Amazon