You are here: Home / Fiction / Every Five Minutes by Bronwyn Elsmore 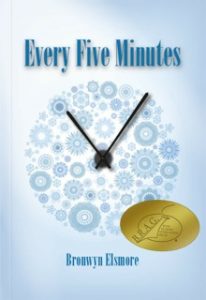 Gina, if that is her real name, sets out to walk to work. Deliberately, she misses the bus and walks into the city, then turns and walks back home. This is not a day for work. Today she will spend with a white dog and a remarkable man.
Every Five Minutes is a B.R.A.G. Medallion Honoree.
Readers say:
“Bronwyn Elsmore has crafted a beautiful story in a unique way.”
“A very unique read to be sure…her writing brilliance showed on each page…”
“I hated the story to end. Read it and you’ll see. It’s a lovely, lovely book.”
“A masterpiece! To find it is perfect in its style and delivery has left me a little breathless.”
“… wonderful story! I love, love your book!”

What Inspired You to Write Your Book?
There’s a strange story behind it. I was writing another novel, stepped into the shower one morning, and the idea came almost magically. In the time it took to wash, I had the format, the main character and the opening. It intrigued me so much, I abandoned the other work and started Every Five Minutes right away. I still wonder about it. Maybe psychologists will make something of it, and one person even hinted at angels! It must have been something in my subconscious, I think. Whatever, I’m glad the idea came to me, because I’ve had some stunning letters from people who have read it.

How Did You Come up With Your Characters?
That went along with the explanation above. Gina was part of the initial inspiration, as was Mark, the man. And Electra the dog wrote herself into the story from the beginning too – strange for an author who has always had cats!

Book Sample
7:50 a.m.
The telephone rings as I’m about to go out the front door. I hesitate, wondering whether to go back and pick it up. It’s probably Pam checking to see if I’m up, and saying she’ll call by after work. Or it could be any one of a number of others – none of whom I want to hear from today. If I leave it for five more rings, it will go to voice mail and I’ll hear your voice. I take two steps towards it, then stop. A pattern of soft padding steps with a clicking of claws comes from the kitchen and Electra’s head appears around the door. I know she’ll sit by the phone and cock her head in that way of hers when she hears you.
I open the catch and let myself out, leaving you and her your time together.

7:55 a.m.
As I walk through the gate and start along the footpath something touches the side of my head and I react. I stop and look about. As I do, I feel it again. I turn right around but no one is near, and then I see the branch hanging at ear height.
The first time you touched me it was like that – just the light feel of your hand on the side of my head as you brushed back a wisp of hair that was blowing over my face. Even though it was just the gentlest touch I was uncomfortable and, in a moment of panic, pulled away. You reacted in surprise, and I tried to excuse my rejection of this small act of intimacy.
“I thought I was going to sneeze,” I said, then felt even more uncomfortable because I had not trusted you.
You waited a moment, then started again. Your touch was even lighter – caring rather than sensuous. Willing away past fears, I stood still and let you.
It took a long time before I did the same with you. We had been reclining on a picnic rug on the grass in the Domain. The gradient of the slope meant our water bottles and the bag with our lunch were balanced a little precariously, but that way we were semi vertical and could see over the green lawns to the city beyond – the Skytower to our left, and in front, through a gap in the trees, a glimpse of the harbour with Devonport on the far shore. As we stood to go I reached up and touched you, just gently, to dislodge a cake crumb clinging to the side of your mouth.
You looked pleased and thanked me, and I understood it was for more than dislodging the crumb.

8:00 a.m.
If this were a movie, some well-selected music would start to play under my footsteps. I try to think what would be appropriate but draw a blank. Or, more truthfully perhaps, I don’t want to think about anything that seems apt, so reject any likely titles before one of them has a chance to embed itself in my mind and replay itself over and over.
Instead, I see us seated in the Town Hall with orchestral sounds of The Emperor Waltz around us. I know it’s Johann Strauss the younger because I’ve studied the programme ahead of time, and that The Radetzky March that comes later is Johann Strauss Senior. It was one of our early occasions there and I was trying not to slip up in any way.
After interval, as a pair of dancers waltzed to the music, I noticed you had your eyes closed and I thought you were dozing, but then I saw your hand moving to the beat. I shut mine also and, with the distraction of the moving figures gone, the music became more intense.
“One day,” you said as we were walking to your car, “I’d like to go to Vienna.”
It’s an idea that had never seemed likely enough to me to even consider, but when you said it I found myself thinking, and in that moment there was the possibility of a door opening in the distance at the end of a long passageway.

8:05 a.m.
As I approach the bus stop I see a small group of people standing waiting. Some of them are familiar, recognizable as fellow passengers from past journeys.
Though I’m not close enough to see the evidence, I know the dark young man with his hair pulled back into a neat ponytail has earplugs inserted because, even though he’s standing at the kerb, he’s moving to a rhythm. The conservative business clothes he’s wearing will allow him to disappear into the crowd when he alights at Victoria Street, but I know from a late encounter in K Road he’s just as comfortable in a short skirt and high heels.
A pair of young women with oversized handbags stand together talking. They’ll continue to do so all the way into the city, their conversation overstuffed with “Cool!”, “So I said,” and “I mean, you would, wouldn’t you?”
Behind me I hear the sound of the bus approaching. As it stops accelerating in order to pull into the stop, the woman sitting on the bench looks up, stows her e-reader in her handbag, and stands.
Once again this morning I find myself motionless. Then, while the people enter the bus, I pretend to adjust my shoe, removing it and shaking from it an imaginary stone. The driver pauses, looking at me, and I raise my hand in a ‘thanks but not today’ gesture. It moves off, displaying an ad for teeth whitening on its back end. A few moments later I follow on foot.

8:10 a.m.
Had I thought it out more fully before I left the house I wouldn’t have worn these shoes. Or I could have put on my walking flatties and brought this pair in a plastic bag to change into when I get into town.
I’m also rethinking the decision to wear the dress. My navy trouser suit would have been a better choice – that would have gone with shoes more suitable for walking and would have been less conspicuous. It’s not as though I want to draw attention to myself. And, already, the warmth of the day means I’ve had to remove the coat and carry it over my arm.
Should I go back and change? The walk home will take fifteen minutes, then another quarter hour back to this spot. Add to that the extra minutes getting changed, and seeing Electra’s disappointment as I leave again. I keep on walking.
An elderly woman bending with a trowel in her garden looks up and smiles.
“You look like spring,” she says, her eyes on the sheen in the folds of my skirt as I move, “like a hyacinth.”
“Cornflower, and more like summer that’s fast fading,” I almost say, but instead just wish her good morning. You give a small chuckle and take my hand.

8:15 a.m.
By now I’m warmed up and in my stride. We’re walking hand in hand along the pavement towards the city centre.
You and I walking together, as we did last year. But then it was another place. A series of other places. And we were other people.
As we walked into that café on Tauranga’s Strand and heard the melody of As Time Goes By on the sound system, we were Rick and Ilsa. When you placed our order and joined me at the table you took my hand and said “In all the gin joints, in all the towns…”
“In all the world…” we said together, and left it there.
Walking around the curving sunbay of the sound shell on Marine Parade in Napier, we were Aragorn and Arwen at Rivendell. And at a break at the top of the desert road, the wind tugging at our jackets and blowing my hair across my face, you were Heathcliff calling for Cathy.
Now we’re Mark and Gina again, walking together. We’re not far from the next bus stop and though I hear the noise of the diesel engine approaching behind me and could possibly have signalled the driver to stop, I keep the hand that’s not holding my bag and my coat clasped in yours and let the opportunity go past.

Buy Every Five Minutes On Amazon