You are here: Home / Bargains and Freebies / Bargain Books Under $3 / Eternally Wild by Cherié Summers 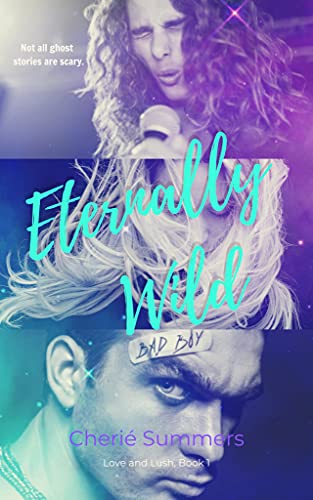 Melanie Davis is alive but not really living. Years ago, she faced an unspeakable tragedy that left her crippled socially. Her life consists of her career and coming home to an empty house devoid of love. That all changes when she meets a mysterious stranger. One who’s a dead ringer for the deceased lead singer of her favorite rock band, Lush.

Caesar Blue died in a tragic accident when he was twenty-eight. The gorgeous music superstar left behind a lucrative career and three bandmates who were devastated by his death. None more so than his best friend, Johnnie Vega.

Drummer Johnnie Vega always had a weakness for drugs and alcohol, and after losing his best friend, his world spun out of control. No matter how many trips to rehab he makes, Johnnie can’t shake the guilt over his friend’s death, nor the addiction he struggles with.

When Melanie realizes Caesar Blue has indeed returned to the world of the living, she finds herself falling for the enigmatic rock star. Not only does he set her on a path to fulfill her lifelong dreams, but his disarming sexuality reignites passions she long ago buried. But when Caesar’s mission to help her brings her face to face with her favorite band member, Johnnie Vega, things get complicated. As she begins to fall under the spell of her teenage crush, she discovers she and Johnnie have a mysterious connection. One that compelled Caesar to bring the two of them together.

But can falling in love with a ghost and his addict best friend be a good thing?

What Inspired You to Write Your Book?
In summer of 2017, I dreamed of meeting the ghost of rock legend, Michael Hutchence, while browsing through the DVD bin at Wal Mart. I woke thinking this would make a great book idea. I filed it away in my head with all the other book ideas, until November of that year when I saw an interview with the surviving members of INXS. I realized it was the 20th anniversary of Michael's death and immediately began writing the tale of a woman who meets the ghost (or angel) of the lead singer of her favorite band. I finished the book in three months, which was my fastest written book so far. (I do have a day job) The entire time I felt Michael's presence with me, guiding me in my work. He had a hand in it for sure, and it's why the book and the sequel are dedicated to him.

How Did You Come up With Your Characters?
My muse for Caesar Blue is Michael Hutchence since he inspired this tale. Anyone who is a fan of INXS will recognize some similarities between them. For Johnnie Vega, I went with my favorite INXS member for my inspiration. Drummer Jon Farriss is my muse. These two male characters met through circumstance and bonded over a love of creating music, so even though their personalities are very different, they have a close friendship that is "eternal". They are brothers. The other two band members from Lush are Kurt and Rhett and the inspiration for those guys was Kirk Pengilly of INXS and Bono of U2. As for my female lead, I pulled things from my own life. She was born in San Diego, I place I've visited, raised in Jacksonville, just like me, and when we meet her, she lives in Atlanta which had become one of my favorite cities. She falls in love with vintage inspired clothing, like my daughter. And she's a writer, like me. I once dated an alcoholic so I brought some of that knowledge to Melanie's storyline as well. Melanie is broken when we meet her and for her backstory I chose one of the worst traumas a parent can go through.

Book Sample
“I guess this is the part where things get difficult.” He sighed. “I knew it might be hard to explain.”
“Excuse me?”
Quickly, he sat back up. “How big of a Lush fan were you?”
“They were my favorite band during high school and college.”
“Was Johnnie really your favorite?” He narrowed his eyes. “Or did you just say that to rattle me?”
“Yes…” She laughed lightly. “And yes.”
Looking away, he picked a dandelion and twirled it between his fingers. “We were always so competitive with one another. Seems so stupid now.”
“Who?”
“Johnnie and me.”
“You know him? Is he okay? I tried to search for information about him after I met you, but I found nothing recent.”
His gaze went skyward. “Yes, I know Johnnie. We’re like brothers. Went to school together…created together…”
“Come on, you’re taking this lookalike thing way too seriously.” She nudged his leg gently. “Wait. I’ve got it. They’re making a movie about the band, and you’re playing Caesar. That’s it, right?”
“You think I’m an actor?”
She scooted closer, examining his face. Reaching out, she brushed back the curls from his eyes. “Have you always looked like him? Or did they perm and color your hair to look like his?”
Roughly, he grabbed her wrist. “Look at me, Melanie. Really look at me.”
“How do you know my name?”
“I know things.” He loosened his grip on her hand and rubbed her wrist gently.
She gazed into his eyes. Deep, dark brown eyes that seemed to penetrate her soul. Over his left eye, a small scar. In the band’s early days, they’d played the bar circuit, and one night a drunk patron had thrown a bottle at…Caesar.
Her hands flew to her mouth as she gasped. Timidly, she reached out again, her index finger softly stroking the scar.
“A drunk idiot. Thank God all I got was a scar. He could have put my eye out. Rhett and Johnnie beat the shit out of him while Kurt took me to the hospital for stitches.”
Grabbing his wrist, she slid his jacket and shirt sleeve up his arm. On his underarm, just above his wrist, a tattoo of an angel resided there, with Caesar’s mother’s name. Naomi. She died of cancer when he was twelve.
“Want to see this one?” He unbuttoned his shirt, exposing his toned chest. Musical notes with a verse from Lush’s biggest hit were inked over his heart.
This is crazy! He’s not Caesar. Why would I even consider that an option? Caesar is dead.
As she touched the tattoo, she took a deep breath, then slowly exhaled. “Well, you’ve certainly taken fanboy to a whole new level.”
He stroked the top of her hand. “How do I make you believe?”
“What is there to believe? Caesar Blue is dead.”
“True.”
“At least we agree on something.”
“Is it so hard to believe that I’m Caesar Blue?”
“We just agreed Caesar is dead.”
“Yes. I’m dead.”
Melanie yanked her hand away and scrambled to her feet. “Now you’re talking crazy. I have to go.”
“No, you don’t.” He stood as well.
“I have to meet my friends.”
“They’re not your friends. Just women you work with.”
This is getting weird. “Have you been stalking me? Is that how you know my name?”
He rubbed his head. “I have been following you. But I knew your name before then. Just like I know those girls met some guys and left with them. They want you to take an Uber home. Is that like a taxi?”
“It hasn’t even been an hour since I left them in the crowd.”
“Check your phone.”
“What?” She pulled out her phone. “There’s no message here.”
“It’s coming.”
Just then, she received notification. She was almost afraid to look.
“Go ahead. Check it.”
It was from Kristy. A message accompanied by a photo of two smiling guys.
“Do you believe me now?”
“Is this some crazy joke the three of you are pulling on me?”
He shook his head. “I don’t know them.”
“Then how did you know?”
“I have some powers.”
“Oh my God!” She huffed and began walking away. “Now you’re a superhero!”
He followed and grabbed her arm. “I’m a ghost I think. Maybe an angel? A spirit of some sort. I’m not entirely sure myself.”
She burst out laughing. “Now I’ve heard it all.”
“My powers are limited, but I can sometimes see things…actually it’s more like feel things that are going to happen.”
“Then you can see that I don’t believe you. Oh, and I’m leaving. Did you see that?”
He pouted and let her arm go. “I only see things when I try.”
“Goodbye.” She started walking again.
He stayed put and closed his eyes. “You’re going to ride home with a young man from Kenya. A college student studying medicine. He’ll tell you about your sunburn.”
She stopped and looked at her pink shoulders. “It’s sort of obvious.”
“Tell him not to take you on the highway. Keep to the backroads.”
She shook her head. This guy is certifiably insane.
“Please. I don’t want you to get hurt.”
She began walking again.
“I’ll see you again soon, Melanie.”