You are here: Home / Fiction / Mystery/Suspense / Equi Knocks of Karma by Jada Ryker 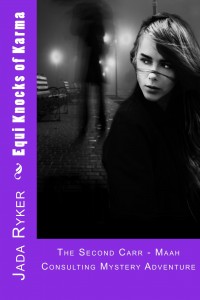 Celeste and Ericka are shocked when Toni Rae Yelton, a self-centered party girl, storms the office and holds them hostage. Desperate, Toni Rae orders the mysterious Ericka to use her alleged supernatural powers to call off the police and the reporters, who are all convinced she’s the sinister force behind her little girl’s disappearance.

Adding to Celeste’s angst, Hobart has vanished. The mysterious man was forced off the streets some months ago. Ericka used a combination of her unusual talents and blackmail to coerce Hobart into working for her firm. He reluctantly agreed. More enthusiastically, at least until his disappearance, he was also Celeste’s boyfriend. Now, Celeste believes something terrible has happened to him.

Celeste is forced to not only investigate, but also navigate the landmines in her life. Celeste’s friend Ericka duals with her arch enemy and business rival, handsome and charismatic Christoph Metre. An odd little dog, curiously attuned to Celeste and using his teeth, claws, and smell for protection, attaches himself to her. When she’s in danger, a devilishly handsome stranger materializes to save her…and makes her less eager to find her missing boyfriend.

As the sinister cords of the mystery tighten around Celeste’s throat, she must find the person behind the mask in time to save not only herself, but others. With the fine Machiavellian hand leaving few clues but many deadly traps, Celeste will have to solve the mystery before it’s too late.

SPECIAL BONUS: As a reader appreciation gift, the short story “Winner Takes All” is included FREE at the end of the book.

What Inspired You to Write Your Book?
I love writing about Celeste and Ericka, and their fun mystery adventures. They’re two very different people. In the first chapter of Equi Knocks, an egocentric party girl holds them hostage. To create a distraction, the mysterious Ericka holds a ritual to locate their captor’s missing child. The practical Celeste doesn’t believe in Ericka’s “woo hoo nonsense,” as she terms it. While Ericka works with her magical smoke, Celeste surreptitiously texts 911.

In the first book, Dog Days of Karma, I hinted at Ericka’s unusual talents. Readers asked to learn more about her. In Equi Knocks, Ericka shines both in a supernatural and an unexpectedly human woman way.

How Did You Come up With Your Characters?
Celeste is my sister under the skin. She shares my childhood issues. I grew up in poverty in a backwoods area in Kentucky. Celeste knows what it’s like to live in a shack, without electricity or running water. Like me, she earned her education as her way out of the deprivation that cycled through endless generations.

The most fun character was El Tejón. He wrote his own background and characteristics. He uses his teeth, claws, and smell for protection. He found Celeste under unusual circumstances. El Tejón plays a great role in the story. Let me know if you like him.

Book Sample
A distant baying, like coon hounds on the hunt, caught her attention. Celeste hadn’t heard the sound since her childhood in the Kentucky boondocks, where hunters spent more time and money on their hunting dogs than their children. She paused at the back door of her car, parked in a vacant lot at the edge of the campus. From her work with the university, she knew the lot was the future site of a new dormitory. Beyond it, the colorful, autumn tree line marked several acres of dense woods, used by the College of Agriculture for various forestry and horticultural projects.

While she scanned the deserted area, she tossed her large shoulder bag into the backseat. Keeping her eyes on the tall, wild grasses, she pushed the back door closed. She sucked in a shocked breath. What the hell?

Bodies flowed through the high grass like black sharks swimming through a sun-flooded, green ocean. Wickedly curved claws rose in the grass, and then were replaced by long, gleaming teeth. The cycle repeated, over and over.

Celeste closed her eyes. She rubbed them vigorously. She opened them, blinking to clear her vision.

A pack of animals flowed through the tall grass, pursuing a dark body running full tilt several yards ahead. The triumphant bays of the hunters rose in volume as they closed in on their quarry.

The hunters and the hunted headed straight for Celeste. Alarmed, she fumbled the driver’s side door open.

The body in front broke free of the grass, skidded on loose gravel on the narrow drive, and headed straight for Celeste. The animal was brawny, its body wide and its churning legs short. She met the desperate brown eyes as she fell back into the seat. The blur of black fur sailed over her and crashed against the passenger door inside the car.

Growling and snarling, the pack closed in on Celeste’s side of the car. The converging animals were huge, their backs covered in thick black fur and their hunters’ glares nearly at eye level with her. Frantic with fear, she scrabbled for the door handle. She managed to close the door as the lead animal’s teeth snapped near enough to her arm to spray spittle on it. The gaze of the leader seemed to bore into hers, his eyes glowing a malevolent red and seeming to promise painful tortures if she didn’t open the door.

Celeste broke the hateful gaze. Her heart pounding in her chest like a jackhammer, she jammed her key into the ignition, as the huge predators, barking and growling, lunged at her door. She started the car, and shot out of the parking space without looking for other cars.

She frantically tugged her cell phone from her pocket. With one eye on the road, she scrolled through her contacts. “This is Celeste Carr. There is a pack of wild—”

She hesitated. If I say giant hounds of hell, baying and foaming at the mouth, they are not going to take me seriously, she thought.

“—dogs around the vacant lot at the far corner of the campus. Yes, the one next to the woods.” She clenched her jaw. “I assure you, I am not joking,” she managed to say through gritted teeth. “One of the… dogs nearly bit me. Please send a university patrol car to investigate.” She clicked the phone off.

As Celeste took the shortest route to the community hospital, her next consulting stop, she tried to relax her tense muscles. “Why do I feel like I’m forgetting something?” She realized she was driving ten miles over the posted speed limit, and she let up on the accelerator. As the car slowed, so did her heart. It eased from frantic pounding to a more measured pattern. She took a deep breath. She choked.

“What is that awful smell? It’s like old roadkill with a whiff of skunk.” She turned her head. She jerked the steering wheel in surprise.

Her passenger was sitting calmly on his haunches in the other seat. His huge head swiveled from the window, meeting her eyes calmly. He raised a doggy eyebrow in gentle inquiry.

“I forgot all about you.” She glanced at the time on her Global Positioning System. “I have some time before my appointment at the hospital. Let’s see who you belong to, boy.”

Dr. Braden shook her head, her messy topknot of bright red hair shaking with the movement. “No chip to tell us his owner.” Slipping her hands into the pockets of her white lab coat, the vet frowned down at the animal on the floor at Celeste’s feet. “I’ve never seen anything like this dog. I can’t even guess at the breed. He’s wide and brawny like a bulldog, but his face is too slim and his muzzle too pointed. His ears are just little furry tabs. They don’t look like dog ears, let alone bulldog ears. His tail is short and thick. His fur is not right, either, for a bulldog. It’s black, with those odd lines of white radiating from his face.”

“I saw a nature program about badgers.” The veterinary technician mirrored her boss’ body language, shoving her hands into the pockets of her baggy smock, patterned with cavorting dogs and cats. “He looks like the offspring of a bulldog and a badger.”

“Maureen, if that were physically possible, I’d have to agree with you.” The veterinarian raised her eyebrows, causing her forehead to wrinkle like a Shar Pei. “Plus, badgers tend to be bad-tempered and aggressive. I’d feel sorry for any bulldog, male or female, that got cornered by an amorous badger.”

Dr. Braden turned to Celeste. “I’ll take a photograph before you leave, Ms. Carr. I’d like to send it to my colleagues. They may have some ideas about the breed.”

The dog growled when the vet took out her phone. When she held it up to take his picture, he snapped at her.

“Stop it,” Celeste admonished the dog. He inched toward the vet, as if to bite the phone out of her hand.

Maureen backed away, leaving her boss to her fate. “Since he doesn’t have a chip to show who owns him, are you going to take him to the pound, Ms. Carr?”

The dog stopped growling. He looked up at Celeste, his gaze watchful.

It’s almost as if he understands what we’re saying, Celeste thought, shivering. Don’t be ridiculous, she admonished herself. He’s just a dog. “No, I can’t do that to him. I’ll take him home with me.”

Maureen was surprised. “Are you sure you want to do that? His smell alone is making my eyes water. And a moment ago, he was acting very viciously toward Dr. Braden.” She pulled the collar of her brightly patterned smock over her nose and moved to the doorway.

Celeste turned to the vet. “I have an appointment. If you can give him his shots and have him groomed, I’ll pick him up before you close.” She moved toward the door.

The dog looked up at Celeste, his sturdy body tense with anger.

“That dog understands what she’s saying, Dr. Braden.” Maureen inched away, her dark eyes wide in her pale face.

“Maureen, you have a wild imagination. Ms. Carr moved to the door without him. He read her movements and her body language, and deduced that she’s leaving him here.”

The vet tech shook her head. “Regardless, I’m not bathing that creepy wild animal.”

Dr. Braden’s mouth twitched. “Yes, you are, Maureen. Grooming is part of your job. Make sure he gets a flea dip, and use the strongest deodorizer we have in stock for his bath.”

His demeanor defiant and his short, thick tail standing at attention, the dog trotted to Celeste at the door. He twisted his head to look at the vet and the tech over his broad shoulder.

He grunted. He hiked one short leg, and let loose a stream of urine on Celeste’s leg. She hopped away in dismay.

She could have sworn his dark eyes gleamed in triumph.