You are here: Home / Children and Young Adult Books / Eclipse of the Warrior, Book 1 by J.L. Hendricks 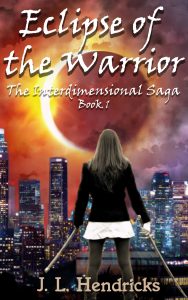 Vampires? Fae warriors? Who knew they were real. Somebody must have and they should have let the rest of us know.

While coming out of a movie, I followed a group of super-hot guys and ended up regretting it. I was pulled into the fight and I don’t know how I did it, but I killed a vampire! Now I’m running for my life.

I’m not supposed to know about their world, being a lowly human and all, but I also shouldn’t have been able to kill a vampire; a ripper is what they call themselves.

Now I have a choice. Well not really. A choice means options and mine are bad or worse. I can die or I can become a hybrid fae. Like I said, not much of a choice, one that sucks actually.

If I choose to become a fae, I have to help them fight the rippers who are kidnapping humans to take back to their planet. Oh, did I mention that they’re all from another dimension? They change humans into hybrid rippers and use them on the front lines of the battle between their two races.

The fae describe them as suicide bombers. Yep. Those are my choices…

What Inspired You to Write Your Book?
I always have a story, or stories, running through my mind. I was speaking with an author that I beta read for and he suggested that I try writing a book. Vampires are some of my favorite characters, good or bad, doesn’t matter. I just love to read a good vampire story. I had an idea of a world running around my head so I decided to create that world where vampires and Fae were at war, but they came from another dimension. I still have so many stories in my head for this world that haven’t even come out yet, so as long as readers enjoy my world, I will continue to expand it and write my characters inside that world.

How Did You Come up With Your Characters?
I started thinking about strong characters in fiction that i liked and then my characters started to evolve on their own. I had one character, Xandrie, that was supposed to be a “red shirt” but she didn’t want to die. That character quickly became one of my favorites and she is in her third book right now. I think my characters are starting to develop a mind of their own and writing themselves into my stories.

Book Sample
All the guys wore black combat boots, not strange since this was L.A., but they all were wearing tight, black leather pants and each had a different type of black leather jacket. What kind of photo shoot were these models heading to? Or was it a movie shoot? I really needed to figure this out.
I kept following them, even after they passed where I parked my car. I decided that I really wanted to see what they were up to. And I still needed to get a photo to send to DeeDee.
All five guys turned down an alley, so I peeked around the corner hoping to see what they were up to. I couldn’t believe my eyes at first. If this was a film set, where was the director or the crew members? That is when I realized I made a huge mistake following these guys…
In the alley waiting for the five “fae warriors” as I called them, were seven beings that could only be described as vampires! A cold feeling started to creep up my back as I realized that I needed to get out of there, and quick.
I made the mistake of letting out a yelp before putting a hand over my mouth to keep quiet. But it was too late; one of the vampires noticed me and grabbed me before I had a chance to get away from the alley.
As he was grabbing my left arm I wondered how he made it over to me so quickly, he had to have been at least one hundred yards away when he first saw me.
I swear DeeDee is gonna pay for talking me into following these guys! I thought as the vampire dragged me further into the alley.
“Let me go, I swear I don’t know anything about what you guys are doing and I didn’t see any faces. I promise I won’t say a thing to the police!” I said while trying to keep from looking straight into the face of my captor.
“I don’t care if you saw anything, I saw you. Don’t you want to play? Aren’t I prettier than those white hats you followed in here?” The vampire whispered into my ear.
I took that to mean he was not going to let me go. So I did what any Southern California girl was taught to do, I smashed my knee into his family jewels so hard he actually bent over gasping. “I don’t care what you want; I don’t want to be a part of this fight so leave me ALONE!!!” I yelled as I pushed away from him.
As I pulled my arm out of his grip, his grotesquely long fingernails scratched my biceps and drew a little blood.
I tried to run away but he seemed to recover more quickly than any normal human male should have after a hit between his legs.
“Ah, ah, ah, you my dear are going to be my midnight snack.” He said while he slowly licked my blood off his fingers.

Buy Eclipse of the Warrior, Book 1 On Amazon