You are here: Home / Fiction / Science Fiction / Dragon of the Stars by Alex J. Cavanaugh 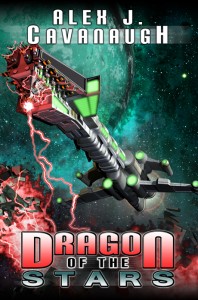 The ship of legends…

The future is set for Lt. Commander Aden Pendar, son of a Hyrathian Duke. He’s poised to secure his own command and marriage to the queen’s daughter. He’ll stop at nothing to achieve his goals.

But when the Alliance denies Hyrath’s claim on the planet of Kavil and declares war on their world, Aden finds his plans in disarray. Entrenched in battle and told he won’t make captain, Aden’s world begins to collapse. How will he salvage his career and future during Hyrath’s darkest hour?

One chance remains–the Dragon. Lost many years prior, the legendary ship’s unique weapon is Hyrath’s only hope. Can Aden find the Dragon, save his people, and prove he’s capable of commanding his own ship?

What Inspired You to Write Your Book?
There’s a song by the prog rock band Ayreon called Dragon of the Sea. The storyline involves Queen Elizabeth sending Sir Francis Drake to face the Spanish Armada. I always pictured a dragon spaceship rather than a sailing ship. Inspired by the lyrics, which include ‘Sail into history, you will never be the same,’ I wrote a story about a lost ship called the Dragon and the man sent to retrieve her.

How Did You Come up With Your Characters?
The main character was easy, as it had to be someone driven and ambitious. Add a few more layers and motivations for his desire to captain a ship, and I had Aden. The secondary characters came slower. Navigator Tamsin’s role took on a far greater purpose and she helped carry the story to the end.

Book Sample
A beep signified an incoming transmission. Aden pulled it up on screen.
Negotiations have failed. The Utothiaz and Khanze walked out of the talks. I think war is imminent, my son.
Aden sucked in his breath. The Utothiaz walked out? In protest or …?
“Sir!”
The urgency in the man’s voice snapped Aden from his thoughts. He cleared the message from the screen and turned in the direction of the lieutenant.
“Sir, the Utothiaz ship changed course.”
Springing to his feet, Aden closed the distance between them. “What’s her trajectory?”
“She’s descending,” the lieutenant said, pointing at his screen. The dark shape above them closed the gap. “At her current speed, she’ll drop behind us and to starboard.”
“Weapons armed?”
“No sir, but her shields are activated.”
Aden ran the calculations through his head. While it was a favorable position, it didn’t provide the Utothiaz the best advantage possible. Their weapons were far more effective when delivered from the direct rear–above or below.
“Below…” Aden said in a whisper. If the shields failed, the most vulnerable spot on the Ryzell resided on the underside. At that range, it wouldn’t take long for the shields to deteriorate.
“Sir?” said the lieutenant.
“Helmsman!” said Aden. “I want you to take the ship closer to the planet. Keep it within the parameters set.”