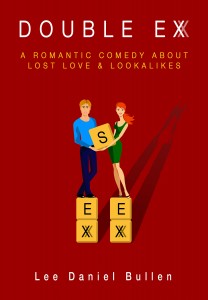 A comedy about two heartbroken friends who pursue lookalikes of their exes but dramatically fall into a soul-stirring love affair.
Nick and Lucy forge an unlikely alliance after they discover their craving for dead ringers of lost loves and help each other meet eligible suitors on London’s dating scene. Trouble looms when friends and siblings grow concerned at their obsessive lust for chasing memories, and with problems mounting around their intensifying relationship they soon find their journey takes some heart-stopping turns.
Nick’s best friend, Konrad, is nursing an aching heart of his own but befriends the beleaguered celebrity, Corsica Coleman, following a fateful encounter that would shape their very future. Together they launch a series of high-profile events that will halt plans to develop an area of London heathland, derail a tyrannical tycoon, and alter everyone’s lives beyond imagination.
‘Double Ex’, a hilarious and disturbingly-relatable romance about love, friendship and obsession.

What Inspired You to Write Your Book?
Personal experience and the development of a story and characters over time in my mind that I needed to put into writing.

How Did You Come up With Your Characters?
I base all my characters on several people I know who fit a particular model I need to convey the story.

Book Sample
Lucy hugged the tree outside the bar and sat next to Nick, ‘That last tree’s got kind of a sexy vibe!’ she said as she edged her seat closer, ‘Or that could just be me right now!’ she added suggestively.
‘Who? Albert?’
‘Albert?’
‘Yeh.’
‘You’ve given the trees names?’
‘Most of them.’
‘Really?’ she said surprised, ‘What makes Albert a boy?’
‘His name for one thing!’
‘Oh come on!’
‘I don’t know; he just feels male.’ he replied and she took his hand, smiling as she tenderly brushed back his hair.
‘I always knew you were lovely.’ she said staring into his eyes. Their hands tightened like coiling boa constrictors and their gaze intensified until all around faded to ash and they were in their own portal of space and time. She placed her head on his chest and squeezed his thigh; enveloping them in a tender electricity that any good poet could write volumes about. Not even the harrying waiter, sweeping around lingering clients and noisily stacking tables, could disturb their trance. The sweet sounds of Paolo Nutini resonated from inside the bar, a favourite of Nick’s, and he seized on the appreciated accompaniment by nuzzling Lucy’s neck until she raised her head from his chest; he put his lips close to hers and held as a pulsating energy built. While the music played in the background like a soundtrack for this exact moment their connection magnetized. They softly rubbed heads and asked each other a million questions until all telepathic reassuring seemed pointless and they could hold on no more. After countless ignored warnings from the tired waiter their lips touched and they submerged in their first kiss like an Olympic diver plunging sleekly into a pool. Reverberations may have been felt far into the solar system, they’d never know, but that was how it seemed. They separated and studied each other’s reaction; Lucy put her head into his chest and began to laugh.
‘I knew that third mojito was a mistake!’

About the Author:
Lee Daniel Bullen is the bestselling author of ‘Double Ex’, ‘Beset’ and several comedies and short stories. He previously worked as a teacher, illustrator and screenwriter but now solely devotes his time to crafting natty novels.
His personal interests include squirrel romancing, ferret fondling and stringing the guitar. His more intelligible writings are available in paperback and eBook.