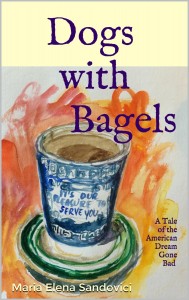 Liliana is the disappointing daughter of hardworking immigrant parents. She is a girl looking to be rescued from her own insecurities and bad decisions. Unable to afford rent in New York City proper, she is craving a life of luxury that isn’t hers, while subsisting on bagels and coffee. In desperate need of support – emotional and otherwise -, she clings to potential saviors, never bothering to question if the attachments she forms really fit her.

In a parallel storyline, her mother, Maria, is trying to reject all offers of help, especially those of her estranged husband, whose unexpected generosity forces her to revisit past mistakes she hasn’t come to terms with. Enmeshed in her own drama, she doesn’t notice her daughter’s troubles until it’s too late. Desperate to keep Liliana from making a mistake that will alter the course of her life, Maria reveals her best-kept secret, a story so shocking it might have the power to jerk Liliana back to reality. It could, on the other hand, alienate her forever.

What Inspired You to Write Your Book?
The book is loosely inspired by my own experiences in my early twenties in New York City. Liliana’s character is not me. She makes her own choices and her own mistakes, which are different than the ones I made. What she and I have in common is a sense of feeling lost, of seeking our own path in life and finding it difficult to make ends meet in one of the world’s most expensive cities.
The story of her parents is loosely inspired by stories I heard growing up, about different people in the Romanian community in New York city, but also by movies and books I found compellingly dramatic.

How Did You Come up With Your Characters?
Liliana is an alternate version of me as a very young woman. I experiment with her, and allow her to be more clueless in some regards. She gets to do things I did not do either for lack of opportunity or because I knew better. She also gets to follow some of the relationship advice I’ve gotten along the way, advice I ignored knowing full well it was not for me.
Maria, Liliana’s mother, is also an alternate version of me in some ways. I can relate to her homesickness, and her feelings of alienation at times. Yet I play around with her character and give her life experiences I have not had.
In the end, both Liliana and Maria become their own people. Neither of them is me.

Buy Dogs with Bagels On Amazon