You are here: Home / *Reading Room / Featured Books / Features / DO NOT PICK UP HITCHHIKERS? by Justin Sturn 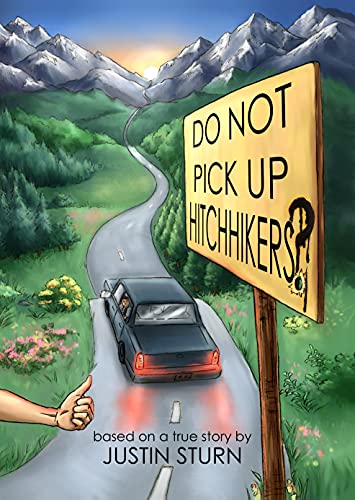 This is a true and gripping tale about a quick-witted young man from Alaska who has been hitchhiking from the age of seven and battling his inner demons ever since. His volatile lifestyle of violence and impulsivity has strained his closest relationships and brought a stigma to his presence. After losing his girlfriend, he’s sent spiraling into depression and leaves everything he knows behind to seek out unknown adventure. Thinking that a new city will give him the clean slate he desperately craves, he hitchhikes down to Boulder CO to start over, but when he brings all his same issues right along with him, he walks away from his life again to follow the whim of the road.
Fueled by addiction and desire, step inside the dark uncensored mind of Justin Sturn as he navigates you through a cataclysmic cross-country hitchhiking trip of self-discovery. You’ll meet prostitutes, drug dealers, hippies, the ultra-rich, and men who want super gay sex. No one has stories like this, and you never know where they’re going to lead you next.

What Inspired You to Write Your Book?
I was always told I was a good writer by my teachers in school. In reality, I don't think I was as good of a writer as I was a story teller, but as I got older I knew I wanted to write a book. I also wanted to become a journalist and was actually accepted by a few colleges, but then I was suddenly diagnosed with a heart condition, and in fear of suddenly dying while trying to make something of myself. I skipped out on college to hitchhike around the country in an attempt to gain as many life stories as I could. Well, I'm still alive, and the book is a collection of that time in my life.

How Did You Come up With Your Characters?
Non-fiction
I kept a journal while I was on the road and I took as many pictures of the people that picked me up as I could. This helped me to replicate conversations and their mannerisms.

Links to Purchase Print Books
Buy DO NOT PICK UP HITCHHIKERS? Print Edition at Amazon

Links to Purchase eBooks – Click links for book samples and reviews
Buy DO NOT PICK UP HITCHHIKERS? On Amazon