You are here: Home / Non-fiction / Distracted Driving: The Multi-Tasking Myth by Luke Russell 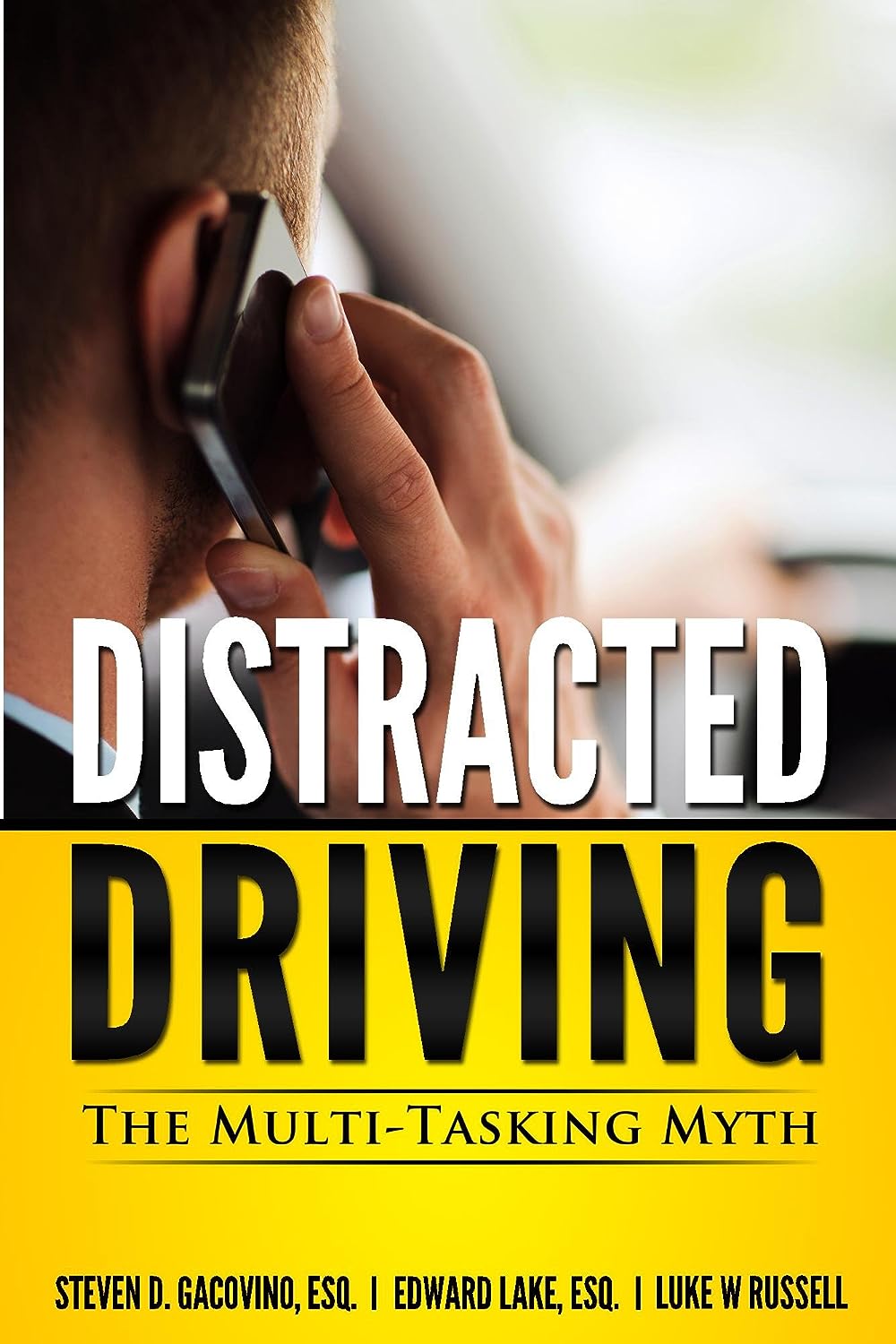 We all want to believe we can drive responsibly and monitor distractions. But our attention is limited by nature, and we are often very subtly distracted from noticing things right in front of us. Depending on what you’re doing while you’re driving, you could literally miss seeing a giraffe grazing on the roadside. Because of distractions, many people have failed to see a gorilla beating its chest right in front of them, and this is no joke.

We really are not good multi-taskers when our attention is spread over tasks that require dedicated attention. That’s why conversations on cellphones turn out to be a serious distraction to drivers. Read this book and see what you think. And then see what you think about whether it’s fair to the rest of the people in your car or on the road when you allow yourself to be distracted in the special way that cellphones can distract.

What Inspired You to Write Your Book?
I produce content for a series we call “You Be the Judge” and I had decided to take on the topic of distracted driving. Once I started, I was rather convicted by the research I was finding and we ended up writing a short book on the topic.

How Did You Come up With Your Characters?
This book is based on lots of conversations and quality research. There are many interesting experiments referenced in this making it an easy read.

Book Sample
Do As I Say

En route to a recent conference for attorneys in Myrtle Beach, I, Luke, was enjoying the mid-afternoon flight and the beautiful autumn day on the other side of my airplane window. I walked out the airport terminal after landing and hopped into a taxi waiting for a visitor like me. The 40-minute drive was a cruise along broadleaf trees still dressed in green, unlike the Hoosier landscape I had left behind.

I struck up a conversation with the driver and learned that his grandkids badly needed an iPhone. He felt it was his responsibility to buy them one.

We talked about how much people use their phones, and we ended up on the topic of using a phone while driving. He explained to me, “I tell my family, ‘When I’m driving, I won’t pick up. If you need me, it can wait, because I gotta drive.’”

As I was agreeing, a ringtone sounded. “Hang on a sec,” he said. To my amazement, he pulled a cellphone out of his shirt pocket and entered into a brief exchange on what sounded like a work-related matter. Then he put the phone back in his pocket and we continued talking – about other things.

Distracted driving has become a red-hot topic. It has also become an old topic. Everywhere you go it calls out from billboards, newspapers, magazines, banners inside malls, radio and TV. It’s even painted on city buses.

Distraction.gov, a federally owned website, says “distracted driving is any activity that could divert a person’s attention away from the primary task of driving.” It goes on to say that, “because text messaging requires visual, manual, and cognitive attention from the driver, it is by far the most alarming distraction.”

When I set out to put this report and the corresponding video together, I planned to dig into data on accidents and fatalities blamed on distracted driving. Distraction.gov says, “The best way to end distracted driving is to educate all Americans about the danger it poses.”

The site goes on to lists facts and statistics that it says are “powerfully persuasive.” Unfortunately, some of the statistics are quoted out of context and some are unconvincing, no matter how startling they may be.

Consider the simple fact that 75% of American teens still say it’s normal to text while driving, even though 97% of teens say texting while driving is dangerous. Adults too know about the dangers of using a cellphone while driving, and yet vehicle crashes involving cellphones result in 1,600,000 crashes annually, accounting for approximately 28% of all traffic accidents. Texting while driving makes you 23 times more likely to crash.

Everybody hears the same statistics about the dangers of using cellphones while driving, but they use the phones anyway, even on motorcycles! Drivers use cellphones even though they know accidents are costly. In 2011, the average property damage associated with crashes was $9,100. That’s more than most people want to spend on an unplanned event.

States have used the same “powerfully persuasive” data to enact laws on the use of a cellphone while driving. But vehicle accidents and fatalities attributed to using a cellphone do not seem to be declining.

Many companies, especially major cellular networks, conduct extensive campaigns against texting while driving. We hear those campaigns continually. We’re quoted scary statistics and told “it’s not worth it.” While it’s easy to agree with the sentiment, it would be nice to see quality data on the impact the statistics are having on driving behavior. I know plenty of responsible adults who talk on their cellphones – and sometimes text – while driving.

AT&T has a wonderful campaign that lets people tell personal stories of how distracted driving has negatively impacted their lives. The stories are told in many heart-wrenching videos, but they have not influenced a widespread change in behavior.

AT&T even ends phone conversations with their customers by encouraging them not to text and drive.

I struck up the following conversation only moments ago with Liz, a young stranger sitting near my table at a Starbucks cafe.

“Can I share something with you and get your reaction?” I asked.

“I was on the phone with a consultant today and as our conversation was coming to a close, something sparked her to say, ‘Everyone here in San Diego texts while driving. We’ve got to multi-task and I guess we’ve got to do it somehow.’”

“Well,” Liz started, “I can’t say much, as I’m guilty too. I’ve texted on my phone while driving.”

“If you know it is dangerous, why do you still text and drive?” I probed.

“Well, you know, I hear those ads where people talk about how they were texting and driving and killed three people and it’s really powerful stuff.” She paused for a moment.

“But it doesn’t change your behavior, does it?”

Legislation, education, and strong stories may eventually play a major role in reducing the cellphone problem, but they are not the entire answer. As long as people think they are good multi-taskers, using a phone while driving only makes sense. Each of us needs to recognize a faulty assumption: We think our attention to important tasks is not significantly diminished during multi-tasking, and so we assume we can pay adequate attention to the road and everything involved in safe driving, while doing whatever else we want to do.

About the Author:
Attorneys Steven D. Gacovino and Edward Lake started their law firm, Gacovino Lake, in 1993. For 20 years they have served over 20,000 individuals across the nation recovering hundreds of millions in compensation for their clients. They represent victims in cases of distracted driving, auto accidents, and other injuries. They also help victims of defective medical devices (e.g., metal hip implants) and medications (e.g., Tylenol®).

Luke W Russell began producing marketing materials for Gacovino Lake in early 2012. A home-grown Hoosier, Luke brings a desire to investigate legal topics that are not well understood by the public. Some of these topics appear in his “You Be the Judge” video series.