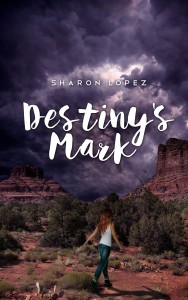 Danni, has made quite the name for herself as a free-lance photographer. Her love life with Miles is no strings attached, just as is her career. She is in control of the wheel, and is moving full speed ahead. That is until she learns that there is more to her life than meets the eye. In walks Damian the calm, cool, cocky, and desirable model with a huge secret about Danni, that sends her life into a chaotic confusion of magic, past lives, and betrayal.

What Inspired You to Write Your Book?
My inspirations for my books come from numerous sources. They can come from people I meet, and conversations I have, etc. Destiny’s Mark is a dream inspired story. I had a scene from the book come to me in a dream; I built a story around it.

How Did You Come up With Your Characters?
My characters have different personality traits of people I know or have known throughout my life. Sometimes I embellish on a trait I have seen to make a character stand out. I believe that some traits are ones I find in myself as well.

Book Sample
The door stood open as the wind and rain whipped through it. Danni couldn’t believe what she was seeing. It couldn’t be him. She had watched his demise unfold before her very eyes. She saw a brief smile on his face. “Hello.” he said. Her head started spinning, and she stumbled backward. She tried to catch herself on the arm of the chair. She missed, and hit the floor…
Danni woke this morning as she always did. The sound of the busy city outside her window as the sun was beginning to creep into the sky. She tore the covers off, and went to the bathroom to splash water on her face. She looked at her reflection and rolled her eyes. “Good morning Danielle.” She uttered sarcastically. She let out a low chuckle as she lowered her face to the sink. She let the cool water run over her fingers for a moment, then filled her hands, throwing the water towards her face. She turned the water off, and gazed back into the mirror. The nightmares were at it again the evidence shown on her face. Her auburn hair tangled around her from another restless night. There were dark circles under her green bloodshot eyes. It had been weeks since she had slept more than three hours a night. She let out a sigh and shook her head. She went to her room and threw on jeans and a T-shirt and ran a brush through her hair. Her next stop was in the kitchen for coffee. It was going to take the usual pot to keep her going throughout the day. She picked up her day planner off the counter and turned the page to reveal the day’s assignments. She put the book down and went to her dark room cup of energy in hand.
She shut the door and walked over to a line of photographs taken the day before. She looked over them slowly one by one. “This is the one.” Danni said, taking the photo down. She set her coffee down and picked up an envelope from the shelf sliding the picture into it. She grabbed a folder from another shelf and put the other pictures that were hanging into it. The first order of business was to get the cover photo; to one of the many magazines she took pictures for, over to their office. Most people work for a paper or a magazine, but Danielle was a free agent working for many different magazines, newspapers, and companies at once. She didn’t want to tie herself to the politics that went with being an employee of a single place. She liked the freedom to choose where her pictures went.
She grabbed the envelope, folder, and her now empty coffee cup, and headed back to the kitchen. Laying the pictures down by her planner, she went to the kitchen to fill her travel mug full of coffee. When she was done she grabbed everything she would need for her day and headed out to her truck. Sunny Arizona looked more like a day from Seattle. The clouds were dark gray in the sky, and did not show any signs of leaving. The rain was a light mist and the wind though mild bit through Danni’s hoodie and chilled her skin. She actually preferred days like this. She loved everything about the rain from the colors and textures of the clouds to the feel of the rain on her face.