You are here: Home / Bargains and Freebies / Bargain Books Under $3 / Despite the Fangs by Dylan Newton

Workaholic werewolves have such awesome perks.

Then she tracks a hiker whose delectable scent calls to both halves of her werewolf self. Not only does Mason Gray look as good as he smells, he may be the only man who can love the beauty behind the beast. Ari should know better than to trust a human, especially after Mason blackmails her into tracking his kidnapped son. But her attraction for the mysterious single father has Ari ignoring her animal instincts.

Can the big, bad wolf live happily ever after, DESPITE THE FANGS? 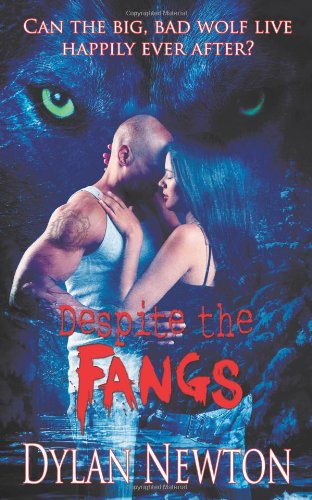 How is Writing In Your Genre Different from Others?
Writing paranormal romances is like eating chocolate and peanut butter–they’re both delicious alone, but when you add them together…scrumptious!

Writing paranormal allows me to escape with my readers to a world where other versions of “normal” exist–a world that’s a little ‘nuttier’ (hence the peanut butter reference) than our own. I love exploring the ‘what if’ scenario for my heroine–What lengths will a female Alpha werewolf go to find love (as happens in this book, DESPITE THE FANGS)? What if a college girl discovers she’s possessed by a demon (as happens in ANY WITCH WAY)? What if a psychic is stalked by a ghost client who needs her help to solve the mystery surrounding his death (as happens in DESPITE THE GHOSTS)?

And when you add the Romance, it’s like coating the Paranormal genre with a thick, gooey layer of fine milk chocolate. In a Romance, you’re guaranteed a happily ever after, which is satisfying in and of itself. But then you add in some scenes with a yummy level of sexual heat, and…
Mmm, mmm, mmm! Who’s ready for dessert?

What Advice Would You Give Aspiring Writers?
It’s not magic. If I landed a publishing contract, YOU CAN TOO!
Although DESPITE THE FANGS is my third published novel, my very first one contracted (DESPITE THE GHOSTS) was actually my NaNoWriMo project ( for those of you that aren’t familiar, NaNoWriMo stands for National Novel Writing Month, where you write 50K words in 30 days of November). After finishing up DESPITE THE GHOSTS in NaNoWriMo, I got writer and reader feedback which I used to revise and polish it until it shone. Then, I created a query letter, and sent it to many, many, MANY agents and editors until landing my first contract in 2009. I can attest to the fact my formula works–because that is exactly what I did to get a publishing contract, and now I’m on contract and book #4!

It’s really four steps to becoming published:
1. Finish your book.
2. Using writer/reader/agent/editor feedback, revise it to within an inch of its life…or yours.
3. Submit to agents/editors.
4. Repeat steps 2-4 until you get a contract.
And while you’re repeating those steps, keep writing, keep reading, and hang out with other authors and writers. Nobody understands a writer’s plight better than another writer, and you need that support system to keep your dream alive.

What Inspired You to Write Your Book?
I’m always drawn to strong heroines, and what could be stronger than a female werewolf who happens to be the Alpha of her pack? I wanted to give readers a fresh take on werewolves, and having a female Alpha heroine in DESPITE THE FANGS delivers something more than your typical paranormal romance. I love my heroine’s bad *ss, take-no-prisoners attitude…and I love the man I wrote for her—one that is so confident of his masculinity that he can be with a female Alpha and not be threatened by her strength.

I think Aribella and Mason are my hottest couple yet!

About the Author:
Dylan Newton was born and raised in a small town in Upstate New York where the local library was her favorite hang-out. Despite earning a degree in English Literature, Dylan spent more than a decade sidetracked by an executive position in corporate America where she swears she contracted testosterone poisoning. After leaving, she dedicated herself to more estrogen-rich passions, like motherhood, writing romance novels and her never-ending quest for the perfect date night.

Dylan married her high-school sweetheart and they are busy living out their own happily ever after in sunny Florida with their two incredible daughters and a snoring Shih Tzu.