You are here: Home / Fiction / Romance / Desire in the Demimonde (The Demimonde Trilogy, Book 2) by Carrigan Fox 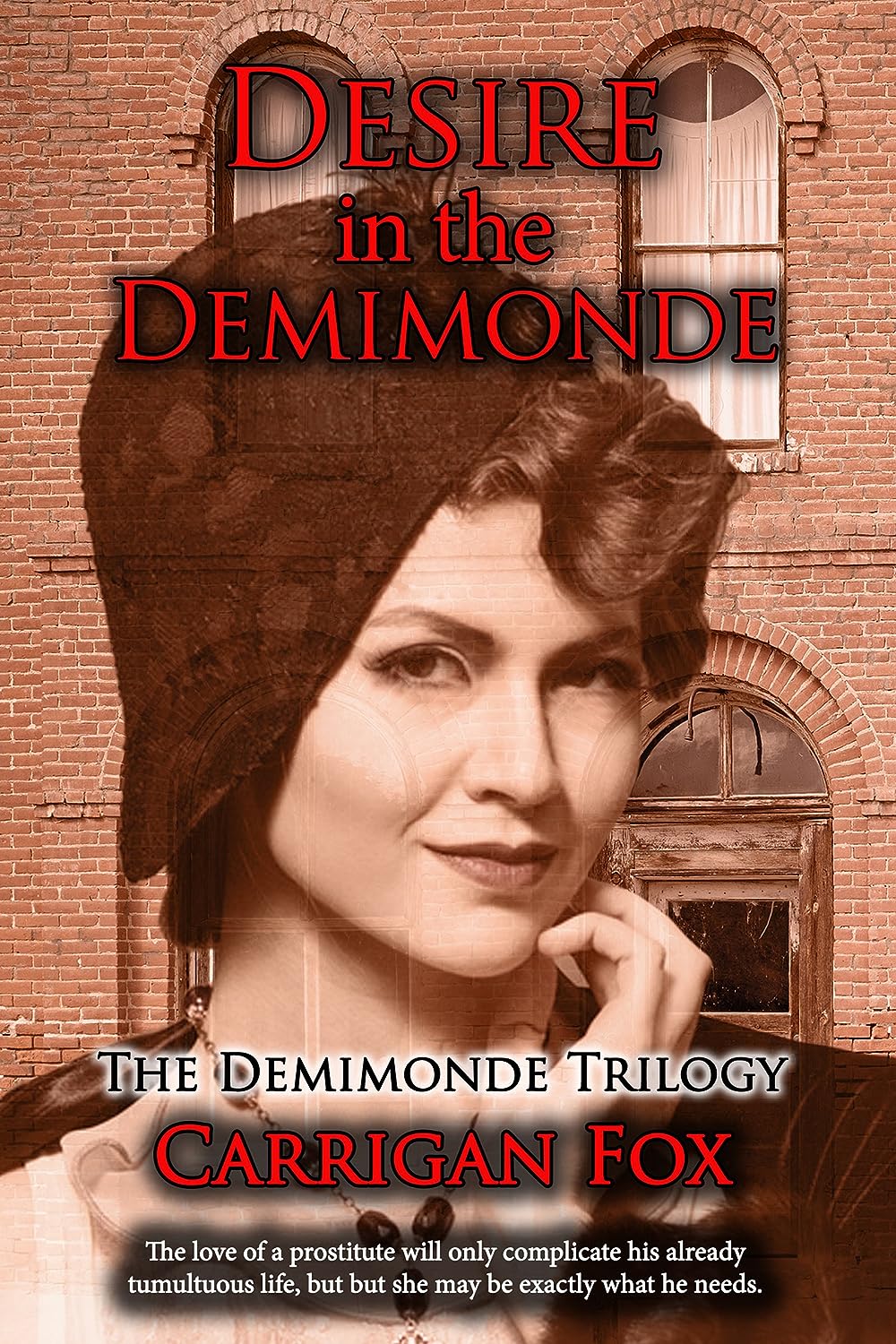 Justine Dixon was a socialite in the upper crust of Butte’s society. But when she foolishly fell for the seduction of a confidence man, she found herself broken and alone. The Demimonde took her in and made her one of their own. Now, nine years later, she is one of the most successful prostitutes of the Mercury Street parlor houses. And she’s made the mistake of falling in love with Jack Murphy, playboy and copper man.

Jack once valued his simple life. He worked in the mine and spent his money on cards and women. But now he is the assistant superintendent of the mine, torn between the concerns of his men and the demands of the corporate owners. When violence breaks out between the two sides, Jack realizes that playing the middle man has put him in a precarious position.

And when his cousin comes to town to threaten everything that matters, Jack is stunned to realize that Justine is more important than he could have imagined. But will he be able to accept the love of a prostitute before everything is destroyed?

What Inspired You to Write Your Book?
Initially, the idea for The Demimonde Trilogy was only going to be one book. But as I continued researching, I realized how interesting the women of Montana were in 1910. I wanted to tell three different stories to relate three different roles of women involved in the red light district.

How Did You Come up With Your Characters?
It seemed irresponsible to write the stories of The Demimonde without including the story of one of its prostitutes. And from the beginning, I knew that I didn’t want Justine to be a stereotype. In Butte, there were parlor houses of high-class prostitutes. I wanted a proud, intelligent, and strong woman in this role. She doesn’t need to be rescued. She doesn’t want pity. She’s probably one of my favorite characters that I’ve created.

Book Sample
“Evening,” he drawled in greeting with a grin that suggested he knew the effect that his slow voice had on her insides.

Without answering, the corners of her mouth tilted upward as she sipped her whiskey. Her eyes lingered on his for a moment before shifting to the limited view of the waltzing dancers in the next room. He leaned his back against the bar, appreciating the rush of blood when his thigh brushed against her knee.

“I trust you’ve been able to keep yourself entertained tonight, Justine.”

Another sip of whiskey and a sardonic smile preceded her response. “Watching you corrupt the local youth is always entertaining, Jack.”

He laughed and shifted deliberately to allow himself the pleasure of feeling her knee nudge him again. He watched for a change in her expression, but she kept her eyes on the dancers that moved across the wide doorway opposite them. Only a hint of a flush in her cheeks suggested that she was aware of the contact.
It was just like her to remain composed, always cool and aloof. He smiled at the line of her jaw and remembered the desire that her eyes would hold as she lay beneath him with her hair loose around the pillow. Not always cool and aloof.

In the six years he’d been seeing her, he’d come to admit that she wasn’t terribly damaged by his cousin’s behaviors. She had pulled herself up by her bootstraps and had made something of herself. He had been surprised to realize that she was one of the most content women he’d ever known. Their conversations had been enlightening, and he’d been forced to admit that she provided well for herself and was completely independent. She was the strongest woman he’d ever met.

That first night in the dance hall, he’d expected to find her sad and alone. He anticipated that she might be intoxicated and a bit too desperate. But she’d been none of those things. She had handled herself on a level expected from the daughters of the wealthiest and most prominent families in town. But then, why wouldn’t she. It was the life she’d been born into.

“I suppose we should dance,” he offered.

Again, the corners of her mouth turned up on either side of her whiskey glass. “One does that on occasion at a dance hall.”

He shrugged his shoulders in dismissal. “Then again, why ruin a perfectly good evening.”

“Why indeed?” She had never once seen him so much as tap his foot in time to the music in six years.

Reaching up, he tucked a piece of hair behind her ear. “Why do you insist on making me come here to find you?”
She widened her eyes in innocence. “I come here for the music and whiskey. If you feel compelled to follow me here, I can hardly hold myself to blame.”

“True,” he admitted with pretended reluctance. He looked to his right to the man who was taking the stool beside him and took advantage of the excuse to move in closer to her. He hooked one thumb in his belt loop and dropped the other hand to her knee. “I suppose that I like the tradition of it all.”

She grinned at him, the laughter lighting her eyes. “You are by far the greatest traditionalist I’ve ever met in my life.”

Shrugging again in mock humility, he returned her grin. “Shall we join a card game?”
“I’d like nothing more.”

He cocked an eyebrow at her suggestively. “Nothing?”

She slipped off of her barstool and moved past him with a laugh. “All in good time, Mr. Murphy.”

About the Author:
I began writing my first novel when I was thirteen, and I have dreamed of my life as a writer ever since. I dreamt of a house on a bluff overlooking the ocean with large windows and an airy solarium with comfy leather sofas on which I would lounge and write. For breaks, I would walk my dogs and small child to the nearby beach.

At some point, I decided to take a more pragmatic approach to life and began teaching high school English. These days, I do live on a bluff, but I overlook the cornfields in the rural Midwest. And I do go for walks with my child, but I have developed an allergy to dogs that typically leave me battling an asthma attack. And for 40% of the year, it’s too cold in the Midwest for leather couches to be comfortable and for solariums to thrive.

Nevertheless, after thirteen years, I am now able to do what I’ve always loved by taking advantage of the self-publishing revolution. And I still have dreams. Currently, for example, I dream of growing a lavish vegetable garden on our bluff. Unfortunately, dreaming about it doesn’t make my thumb any greener. In the meantime, I take great satisfaction in the fact that the survival of my protagonists is dependent only on my imagination rather than my ability to avoid over-watering them.

Links to Purchase eBooks
Link To Buy Desire in the Demimonde (The Demimonde Trilogy, Book 2) On Amazon