You are here: Home / Fiction / Fantasy / Defenders of the Land by Eileen Troemel 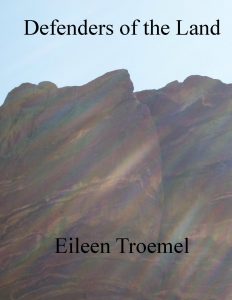 The Defenders grow in number as young adults from all the villages come to help. Gi and Bear maintain train recruits while Tof with his two lieutenants, Bri and Alex, take the Defenders to the villages to see how they can help. They learn as they go. They learn more magic and better fighting strategies as they must defend against the magic of the magic seekers and the skills of the troopers.

What Inspired You to Write Your Book?
The story continues. I couldn’t stop writing at a reasonable length for just one book. As the rough draft grew, I knew this was going to be a multi-book series. The first book is about figuring out what they wanted to do and how to start doing it. This middle part is about figuring out how to be a leader, recognizing there will be mistakes, and how to move forward.

How Did You Come up With Your Characters?
I wanted the story to be more than just the main characters so the seven original characters become the focus while all sorts of other people come to help them. I have “sages” who provide them with wisdom and insight into how things have been done. I have “apprentices” who are learning on their heels. This means my characters not only have to work on saving the people in their province but they have to show others the right way to do it.

Book Sample
After the bodies were buried, Tof had Bri, Saxo, and Ullock accompany him into the woods away from all prying eyes and ears. Bri walked a circle around them and performed the silence spell. She took her place behind and to the right of Tof. One hand on her sword and one behind her back, she waited to see how Tof would deal with the two who’d failed in their duty. Standing at attention, Saxo and Ullock faced him.
Tof hung his head while he chose his words carefully. “What we do is difficult. Friends may actually be enemies. We are new to this life and these tasks. We learn as we go.”
Ullock started to speak but Tof held up his hand for silence, “You were drugged; the sleeping was not your fault. With that I agree. The fault lies in taking the tea to begin with. I know not everyone recognizes the herbs in some teas or knows their affect. However, you took a drink from someone who you didn’t know. They could just as easily have laced your drink with poison.”
“When one of us fails, it’s a failure for the entire company,” Tof continued. “This falls on my shoulders. However, I hope the lesson you get out of this is to never take anything from other people when you aren’t sure of the contents. You erred, therefore, you must be punished.”
Saxo and Ullock looked slightly alarmed.
Having been raised by Rina and Gi whose punishments were meant to teach not harm, Tof informed these two of their punishment, “There are,” he turned to Bri.
“Thirteen,” she informed.
“There are thirteen spells and charms to help identify the contents of a substance. Your punishment is to learn all thirteen of them and teach the entire company, including recruits when we return, how to do these spells and make the charms.”
Saxo and Ullock groaned. Spells could take a long time to learn; teaching them to the company might take months. Sharply Tof asked, “Do you feel this punishment is unfair?”
“No, sir,” they replied in unison.
“Very well,” Tof informed. “Bri knows all of them and will teach you two spells immediately. I expect the entire company to know them by end of day.”
Tof walked back to Haya’s settlement without a backward glance. He had seen their dismayed looks and wanted to smile at them. He’d taken on the role his mother and Gi had always had.
By sunset the entire Defender Company knew the punishment Saxo and Ullock had been given. They learned the two spells taught to them. Bri had made them easy for Saxo and Ullock who had spread them through the company. Tof watched amused at supper as all of them performed the spells over their own dinner.
“You reminded me of Rina,” Bri told him softly from the tree near his tent. “You seemed so regal and stern. I could have sworn when you walked away your shoulders were shaking with silent laughter. I think hers always did.”
He smiled at his foster sister. “Rina was always harder on those punishments than Gi wasn’t she?”