You are here: Home / Children and Young Adult Books / Defects by Sarah Noffke 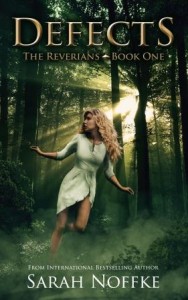 In the happy, clean community of Austin Valley, everything appears to be perfect. Seventeen-year-old Em Fuller, however, fears something is askew. Em is one of the new generation of Dream Travelers. For some reason, the gods have not seen fit to gift all of them with their expected special abilities.
Em is a Defect—one of the unfortunate Dream Travelers not gifted with a psychic power. Desperate to do whatever it takes to earn her gift, she endures painful daily injections along with commands from her overbearing, loveless father. One of the few bright spots in her life is the return of a friend she had thought dead—but with his return comes the knowledge of a shocking, unforgivable truth. The society Em thought was protecting her has actually been betraying her, but she has no idea how to break away from its authority without hurting everyone she loves.

What Inspired You to Write Your Book?
I love dreams and I love dystopian. I really wanted to bring the world of Dream Travelers together with an oppressed, starched society. Also, I really wanted a rebel force to retaliate using incredible superpowers. Once I put all these ideas together the story unfolded quickly.

How Did You Come up With Your Characters?
I learned a lot from feedback on my first series. Readers wanted a stronger, less whiny protagonist. That was how Em’s character started. Then for her love interests I loved the idea of a cowboy who relied on the earth when there was so much technology and concrete around him.