You are here: Home / Faith and Religion / Christian Fiction / Deathwatch by V. B. Tenery 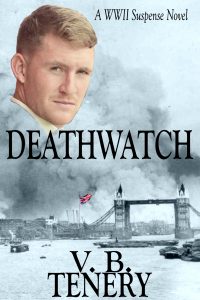 Finding a killer in the middle of a blitz is murder.

When a cryptanalyst in Britain’s top secret Code and Cyber School is murdered, alarms sound in the highest echelons of Parliament. Was it merely a lover’s quarrel that ended her life, or was she killed after telling the Germans everything they wanted to know? That’s what MI6 Agent, Commander Grey Hamilton must find out.

He is joined in the chase by an old university friend from Scotland Yard, and a young American genius who has been singled out by the killer as his next victim.

As the Luftwaffe escalates its reign of terror over London, the unlikely team dodges bombs while searching the Underground and London docks knowing failure is not an option. The lives of English soldiers and perhaps the fate of the British Empire itself, is at stake.

What Inspired You to Write Your Book?
I’ve always been fascinated by this period in history. The bravery of the Allies under the most horrid conditions of war. As Winston Churchill said, it was truly our most shining hour.

How Did You Come up With Your Characters?
My novels are all character driven. I began with what would an English Lord, injured in battle, and now working for MI6 do to find a killer in war-torn London? What kind of woman would attract a man disillusioned by a bad relationship? These questions drive the characters and the story development.

Book Sample
Bletchley Park Mansion
Buckinghamshire, England
Grey entered the dining area at 6:28 the next morning and found Miss Sullivan already seated at a table, tea cup in hand. He ignored how lovely she looked despite the early hour. Apparently, she hadn’t lost any sleep over his rudeness last evening. “I’m glad to see you’re punctual. That will make my job easier.” He called the ancient waiter over and placed his order.
She grinned behind her cup. “I aim to please, Commander.”
“Is that sarcasm, Miss Sullivan, so early in the morning? And here I came to apologize for yesterday.”
“There’s no need . . .”
He held up his hand. “Let me get through this. I practiced all morning while shaving. And apologies do not come easily to me.”
“Then by all means, proceed.”
“Before I begin, have you eaten?” he asked.
“I’ve ordered toast and jam to go with my tea.”
“That’s not breakfast; it’s mid-morning tea. You look like a strong wind would blow you away. Now where was I? Oh yes . . . my apology.”
The waiter tottered over and placed toast with jam in front of Grace, then a steaming plate of fried Spam, powdered eggs, and toast before him. He raised his fork. “You know, Spam is a much maligned delicacy. Most people turn up their noses having never tried it. It’s quite good. You should give it a go.” He speared a forkful and offered it to her. “It would put some meat on your bones.”
She shook her head. “No, thank you. My bones are quite happy as they are. Is that your apology?” Her mouth spread into a wide grin that brightened her face. “Are you actually comparing yourself to Spam? Is that your subtle way of saying I should get to know you before I decide to dislike you?”
“That was merely an aside before I get down to serious business, but it isn’t a bad analogy.” He placed the fork on the table, wiped his mouth with the napkin then sat back in his chair, studying her face. “You were right yesterday. I was putting my personal preference before the good of this investigation and my own country. If you come aboard, you will be a wholly contributing member of the team, and I will show you no mercy. You and Milford will be at my beck and call whenever needed. Understood?”
“I wouldn’t have it any other way.”
She gazed down at his plate as he finished off his breakfast. “For a lord, you have bourgeois taste buds.”
“Lords are merely men, Miss Sullivan, although spoiled more than most, granted a title at the whim of the king. Not of the blood royal, so to speak. Besides, rationing has forced me to retrain my palate. Are you packed?”
“I never unpacked.”
“You and I are going to get along famously, Miss Sullivan.”
“About that ‘Miss Sullivan’ business, do you think that since we will be working together we might be less formal?”
“Absolutely. I shall call you Grace and the Inspector, Aubrey. You can call me Commander.”
She looked for signs that he was kidding and saw a slight twitch at the corner of his mouth that vanished so quickly she wondered if she’d been mistaken. “I don’t have to genuflect or anything, do I?”
“No, nor is a salute required. A simple ‘Commander’ or ‘Sir’ will suffice. I’ll see you at the entrance in ten minutes. I have to secure a ride for us to the station.”

Interview with Author – V. B. Tenery