You are here: Home / Bargains and Freebies / Bargain Books Under $3 / Buyer’s Guide: David Finkleman and Dangerous Magic by PK Burian 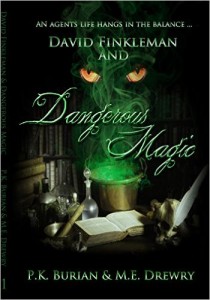 About David Finkleman and Dangerous Magic:
Welcome to Olympia, home of magical secrets, dangerous monsters, mystical creatures, and the few people able to fight them!

David is in the wrong place at the wrong time. Or at least that is what he feels like when the FBI recruits him to go undercover in his high school. Isn’t it bad enough that he is bullied by several football players and they are the very ones he has to investigate!? But now he has to find out if they are circulating a deadly drug with a huge side effect: it turns a kid into a hideous, blood-sucking chupacabra!

Sure, he has wizard powers, but he never really used them before. Plus, he can’t tell a single person about his undercover work, not even his best friend Sam. And his parents expected him to keep his schoolwork and grades up or he will get grounded.
David feels in over his head.

But as he delves deeper and deeper into the case, he realizes he must solve it quickly before a murder occurs, especially his own!

Link To Buy David Finkleman and Dangerous Magic On Amazon