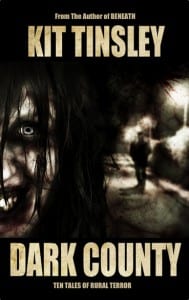 The author of BENEATH takes you on a Journey into the dark heart of rural England.

Lincolnshire, a place of beauty and peace, but also a place of bleakness and violence. In this collection of short stories, Amazon bestselling horror writer, Kit Tinsley explores the darkness at the centre of the countryside. The ten tales within cover many aspects of the horror genre, from the supernatural to all too human evil.

A DRIVE IN THE COUNTRY – A troubled, married couple seek a pleasant day out, but it goes very wrong when they have an accident on the isolated, country road.

TRACKS – A young, deaf boy tries to prove his bravery by exploring a ghostly local legend, but will he survive the tracks?

THE HOUSE BY THE MARSH – A group of childhood friends find their whole lives haunted by a chance encounter with a derelict old house.

THE CROWS – A career criminal takes on one last job too many.

FEAR AND LOATHING IN SKEG VEGAS – A young man with a gambling addiction owes money to a very dangerous man. Will a meeting with a strange old man save him, or damn him?

These stories and more will open you eyes to what is hidden under the surface of the DARK COUNTY.

What Advice Would You Give Aspiring Writers?
patience, do not rush things, or pressure yourself into doing things to quickly. Take your time and enjoy what you are doing, that is the main thing.

Author Bio:
Kit Tinsley is an English horror author. He is a fan of all things horror.
He graduated form DMU Leicester in 2002 with a BA (hons) in Media Studies and English. Since then he has spent time teaching both subjects in secondary and further education.

He has also worked on several independent films, Writing a film called ‘Red Route’ in 2007. Unfortunately the film, which Kit also acted in, has been lost in post production hell since completion.

Most recently he has worked on production of a film called ‘Shadows of a Stranger’, working with actors from the popular T.V shows Doctor Who, Rainbow and Torchwood, as well as an actor who appeared in both ‘Batman Begins’ and ‘The Dark Knight’. The film is being prepared for its release as we speak.

Kit is also a musician, He is lead vocalist/guitarist for a punk/folk/rock band called Dog Goblins.

He lives with his wife and their young son.

What Inspired You to Write Your Book?
My latest book is called ‘Dark County’ it is a collection of short horror stories all set in the countryside, or as I prefer to call them ‘Ten Tales of Rural terror’. The inspiration for this book was two fold, the fact that it is a collection of short stories came from the fact that I had just finished and published my first novel and wanted to do something different, doing a short story collection gave me the opportunity to write stories of many kinds and styles.