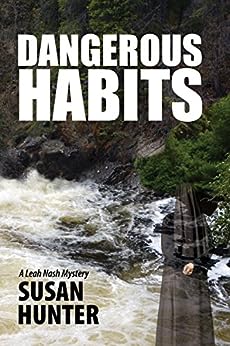 A cryptic note compels reporter Leah Nash to dig into the accidental death of her younger sister at a school run by Catholic nuns. No one — not the nuns at the school, the priest who mentored her sister, the wealthy politician on the board of the school, not even her own publisher wants her to pursue the story. But Leah, equal parts smart and smartass, just can’t quit. As she starts closing in on the truth, someone starts closing in on her. Then, just when she’s got it all figured out, a stunning revelation changes everything, and sets the stage for an ending you won’t see coming. Leah’s always been willing to kill for a good story, but will she die for one?

What Inspired You to Write Your Book?
Years ago a friend of mine told me a story about being in her office late one night on the college campus where she worked. When she finally left, she noticed a light on in the Art Department and out of curiosity she investigated, half-ready to call security if she saw something amiss. When she peeked into the studio, she saw a Catholic nun in full habit going through the supply closet. She immediately walked away, granting the woman the immunity from suspicion that her habit seemed to confer. It was only later that she thought maybe the best way to commit a crime would be to dress as a nun, because who would then suspect you? That germ of an idea stayed with me and when I finally got around to writing the novel I’d always talked about, that thought was my jumping off point.

How Did You Come up With Your Characters?
Only one is actually based on a real person, whom I hope never recognizes that fact. Others are composites of people I worked with, or relatives or friends, and some are people I would like to know.

About the Author:
As a charter member of Introverts International, I find this whole include-a-biography thing slightly uncomfortable. On the other hand, I do like connecting with people one-to-one and after all you are just one reader and at this moment in time, it’s just you and me.