You are here: Home / Fiction / Romance / Dancing with Velvet by Judy Nickles 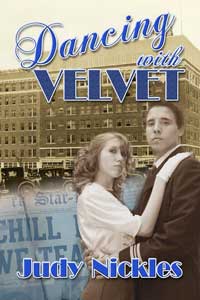 For Celeste, growing up in a small West Texas town, life has been unremarkable—so far. She barely remembers her mother, and her father is always distant and, when he’s drinking, emotionally abusive. Her older sister Coralee has married into a warm, loving family and moved away. After two years at the local business college, Celeste now works as assistant bookkeeper at Woolworth’s. But by night she dreams of dancing with a man who appears from beyond a blue velvet curtain and beckons her to join him there when the music ends.

The blue velvet dress she sees in a local department store beckons her also, this time to a new life outside of what she now lives. She wears it for the first time to a dance at the Roof Garden of the St. Angelus Hotel and dances the night away with a young man she’s met twice before—the first time when she dropped an apple out of the office window right onto his head.

Kent is a traveling salesman and fills the roll of man of the family since his father’s death. When he gets a new route which doesn’t include Celeste’s hometown, he doesn’t try to keep in contact. But when the town gears up for war after December 7, 1941, Kent reappears as a student at the bombardier training school, and romance blossoms.

The bloom fades, however, in the light of a new Woolworth employee’s accusations that Kent is the father of her little boy. Celeste can live with that as Kent is sent overseas. He goes off to war denying the child is his. But when that same little boy is literally dumped on Celeste’s doorstep one frosty Sunday morning, life changes forever.

Kent comes home, still denying Jonny is his. The trouble is—Jonny has been with Celeste for more than two years. They are, as he likes to say, “a team”. And Celeste isn’t making a trade—not for Kent or anyone else.

What Inspired You to Write Your Book?
My hometown in West Texas was a wondrous place when I was growing up in the 40s-50s-early 60s. One of the hotels called its top floor the Roof Garden, and my parents used to talk about dancing there in the 30s to the music of live bands. Like so many historic structures, the building eventually met the wrecking ball. I miss seeing it. So I brought it back to life in Dancing with Velvet. Because I needed more details about the building itself, a local newspaper columnist put out a call for information from anyone still living who remember it–and they came! He got 4 columns out of the project,and I got the needed facts and so much more. A sentimental journey through my memory, backed up by old city directories, made Dancing with Velvet a love song to my hometown…the way it used to be.

How Did You Come up With Your Characters?
The book needed characters typical of the times: children of the Depression, young men going off to war, young women managing on the home front. Celeste and Kent were these children now entering adulthood. Basically, they were my parents’ generation…known in some circles as “the greatest generation”. Celeste and Kent had many obstacles to overcome, but it was inevitable that they’d manage somehow some way. Because that’s what people did “back then”.

Book Sample
She begged off from the Canteen and made baked chicken and dressing for their last evening together, putting aside her qualms about being alone in the house with Kent and trying not to think of Claudia and her little boy. After they ate by candlelight, he dried the dishes as she washed. “We’re playing house,” he said.
“Or something.”
His hand caressed her shoulders and moved low on her back. “Or something.”
She shivered. “We can go sit in the parlor and listen to the radio.”
“If we were married, we wouldn’t have to sit in the parlor.”
“We’re not married.”
“I love you, Velvet. I need you. Need you like a man needs a woman.”
She moved away from him a few steps. “Don’t, Kent.”
He picked up the dishtowel again. “I’m not going to attack you,” he said. The bitterness in his voice unsettled her.
“I know that.”
“But I meant what I said. A little hand-holding and kissing doesn’t go a long way toward…”
“Stop it.”
He tossed the dishtowel on the cabinet and stalked out of the kitchen. She found him leaning on the porch railing, staring into the dusk. “Maybe we should go to the Canteen and dance,” she said.
“Maybe you should just drive me back to the field.”
“It’s your last night, Kent. I don’t want to spoil it with a fight.”
“That’s what I’m fixing to do, you know, fight. Maybe it’ll be from an airplane where I can’t see them, but I’m still going to kill people, and they’re going to try to kill me.”
She slipped her arms around his waist from behind him. He jerked away. “Don’t be a tease, Velvet. Claudia sure was.”