You are here: Home / Fiction / Romance / Crumpets and Cowpies by Shanna Hatfield 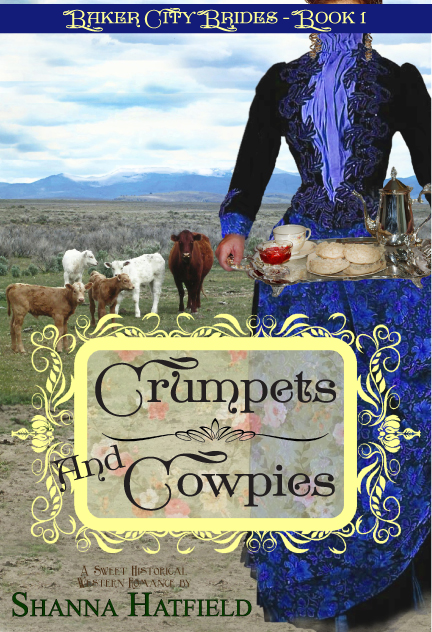 Rancher Thane Jordan reluctantly travels to England to settle his brother’s estate only to find he’s inherited much more than he could possibly have imagined.

Lady Jemma Bryan has no desire to spend a single minute in Thane Jordan’s intolerable presence much less live under the same roof with the handsome, arrogant American. Forced to choose between poverty or marriage to the man, she travels across an ocean and America to build a future on his ranch in Oregon.

What Inspired You to Write Your Book?
Originally, I planned for this book to be a Christmas story about a rough and rowdy rancher who found himself in England during the holiday season. Once I actually sat down and started writing the book, the characters took on a life of their own and I realized the story wasn’t going to be a stand alone Christmas story – but the first installment in a new series!
I chose Baker City as the setting for several reasons.
‹ It fits into the Eastern Oregon region that I enjoy writing about.
‹ It was a major stop on the train route through the area way back when.
‹ It was a booming town during the 1890s (when the series takes place).
‹ Many of the town’s old buildings still stand which makes it awesome for research and visualization.
‹ The Baker County Library has a huge and amazing collection of old photographs that brought the town to life for me.
‹ I like the way “Baker City Brides” sounds and rolls off the tongue.
‹ In the 1890s, Baker City experienced its second gold rush along with the establishment of many successful businesses. (Giving me loads to write about.)

How Did You Come up With Your Characters?
As I began forming the characters, I knew they needed to be completely opposite – in their backgrounds, their behaviors… everything.
Thane Jordan is a seasoned rancher who has never known anything except hard work and hard knocks. Although he doesn’t want to leave his ranch to settle his brother’s estate, he makes the trip and discovers much more has been left to him than a house and a business.
Lady Jemma Bryan is an English Lady, accustomed to a life that was lush and comfortable and entirely pleasant. She’s forced (for the sake of two children) to marry a man she loathes entirely, and gives up everything familiar. After traveling across an ocean and the vast country of America, she spends an hour on a bumpy buckboard ride to discover her new home in the midst of nothing but sagebrush and cattle.

Book Sample
“Thank you, Thane. I enjoyed it as well. The ranch is truly beautiful. Thank you for showing it to me.” Jemma smiled at Thane in gratitude.
He offered her a sidelong glance. “I’m sorry it took so long. I meant to take you out last week, but things have been so busy.”
Jemma placed her hand on his arm and looked into his face. “I understand. I know you have many responsibilities to see to and you can’t spend all your time with the children.”
Although he loved Jack and Lily, he didn’t feel a desperate need to be close to them. Rather, it was the beguiling woman standing beside him with her hand burning a hole through his shirtsleeve who captured his thoughts.
“I better relieve Sam of the children. I’m sure he has grown tired of Lily asking ‘why’ and Jack wanting to find you or play with the dogs or ride his horse. Thank you for giving him his own horse, by the way. He hasn’t stopped talking about it since the moment you put the reins in his hands.”
“Every rancher needs a good horse. Jack will grow into Nick.”
As she recalled Jack’s excitement at having his own horse, she smiled at Thane. “It meant so much to him for you to entrust an animal to his care.”
He nodded as she turned back toward the barn door. One of Lily’s doll dresses on the ground caught her attention. When she bent over to pick it up, Thane reached out and brushed his hand over the curve of her rear.
She shot upright as if she’d been branded. Fire blasted from her eyes as she spun around and glared at him. “Mr. Jordan, that is completely and absolutely unacceptable. Do I make myself clear?”
“Yes, ma’am.”
“And wipe that smirk off your face!”
“That, I can’t do.” Thane’s wicked smile did little to calm her pounding heart or the breath she drew in with tight, short gasps. He touched his fingers to his hat, strolled out of the barn, then looked back at her with a wink.
Frustrated, she stamped her booted feet then marched to the bunkhouse. She wanted to chase after Thane, spin him around, and slap his face – or kiss him until she lost what little sense she had left.

Buy Crumpets and Cowpies On Amazon