You are here: Home / Fiction / Courage to Change by Sylvie Nickels 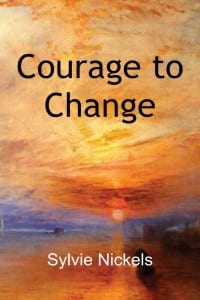 Nikki’s childhood was blighted by her father’s drinking. She knew she would never lose control of her life like that. But things didn’t work out as she had planned. This is her story

Targeted Age Group:
Young Adult though I hope it has ageless appeal

How is Writing In Your Genre Different from Others?
Difficult to judge oneself. But I try to speak directly tom people

What Advice Would You Give Aspiring Writers?
Write every day. No accept excuse for not doing so.

Author Bio:
I started writing as a child in World War Two, and have barely stopped since. Much of it has been as a travel writer for major UK newspapers and magazines. More recently I have returned to my first love of writing fiction and have self-published five novels, an anthology of short stories, and a true adventure (The Big Muddy – a canoe journey down the Mississippi). A recurrent theme has been the effect of war on the children and grandchildren of participants (as in my trilogy ‘Another Kind of Loving’, ‘Beyond the Broken Gate, and ‘Long Shadows; and subsequently ‘The Other Side of Silence’). Reconciliation is also a recurrent theme as is my belief that it is better to be part of the cure than part of the problem. My most recent book, ‘Courage to Change’ deals with addiction and is my first aimed at the Young Adult market. Reviews of several of my books can be found on www.thebookbag.co.uk as well as on Amazon.

Most of the detail of my novels is based on life experience. For example, the fostering of an East European child contributed to ‘Another Kind of Loving’ (about the break-up of former Yugoslavia); I have spent a great deal of time in Finland (the setting for much of ‘The Other Side of Silence’) and for the same title drew on my late husband’s experience as pilot in Bomber Command and a prisoner of war in World War 2.

I was married to retired lecturer and photographer George Spenceley who died at the age of 91 early in 2013, have three stepsons and live in a village in north Oxfordshire.

What Inspired You to Write Your Book?
Addiction is a major problem in western society, especially alcoholism as alcohol is such an accepted ingredient of our social culture. I have had a lot of contact with alcoholics, both practising and in recovery.