You are here: Home / Faith and Religion / Christian Fiction / Conquering Your Goliaths: A Parable of the Five Stones by Kathryn Elizabeth Jones @kakido 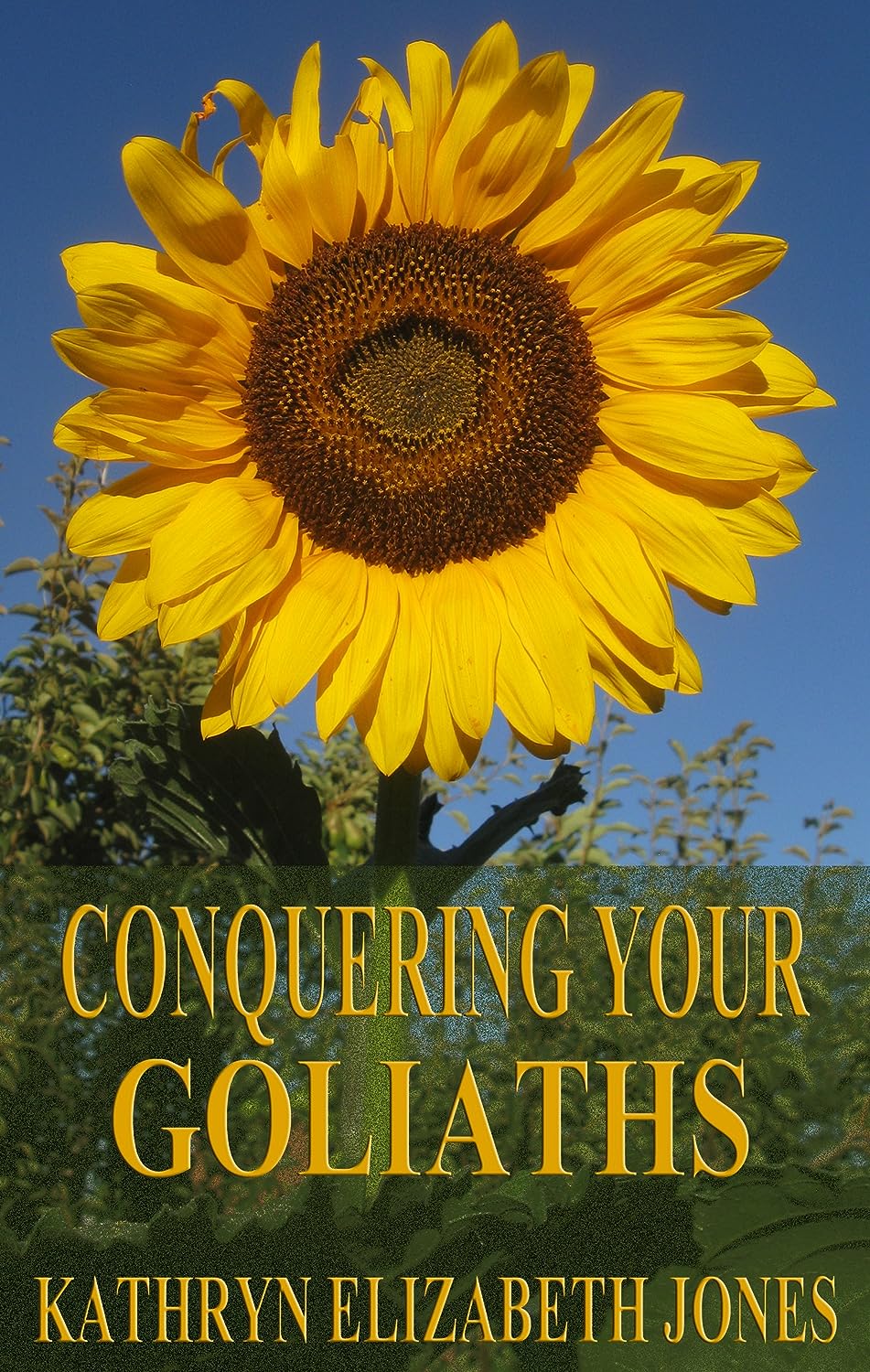 David gathered 5 smooth stones to meet and defeat Goliath. What did these stones represent and how can you use them to conquer Goliaths in your own personal quests? Ms. Virginia Bean will show you how.

Travel with her on her own personal journey. See what she does. Learn how she grows. Discover what she becomes.

“Conquering your Goliaths—A Parable of the Five Stones” is for anyone desiring to travel beyond mediocrity, pain and fear. Learn of the great power within you, a power given to you from God, a power that must ultimately be unleashed to conquer the Goliaths in your own life. Come to an even deeper understanding of God and what he wants for you. Come…

What Inspired You to Write Your Book?
My husband, who always encourages me to continue writing.

How Did You Come up With Your Characters?
Most of my characters come from my imagination. This time, however, I had some biblical as well as heavenly characters to flesh out; not an easy thing.

Today, as in every day, she’d worked longer than necessary putting on her makeup, and more time than expected cleaning her house and organizing her day so that others would see how good she looked even when she was away. She’d prayed, yes, but it was always one of those quick dose methods, those that kept her in the black with the Lord and out of the red with her own guilty conscience.

She left the house at half past eight, journeyed to her job at the Regal Doughnut Factory and placed her feet smack dab on the spot where she’d stood for ten not so glorious years. She’d tried to make them glorious, of course, and her hands had proved faster and quicker than most; still, after a long day of standing and an even longer evening of cleaning up, she was ready for a vacation.

At least that’s what she told herself.

Unfortunately, on this blistery summer day in early August, Ms. Virginia Bean got just what she needed but didn’t want.

A firing, of sorts, happened that day; the factory was closing down, or, at least, losing some ground and opening up in New York, far across the country from Ms. Virginia Bean.

The job opportunity, if you could call it that, was no longer a stone’s throw away, and Ms. Virginia Bean was determined to find another career to her liking and so she’d gone walking in the hot air to find it. She’d left her two bedroom home without a formal jacket and had put up her blond hair in a loose bun, an elegant style that made good use of her fragile face. She could already feel the make-up’s foundation warming against her fair skin as she walked, fine lines of sweat finding its way from her neck and onto her beautifully constructed green chemise blouse, but she continued forward. It wasn’t like her to stop.

At the light she turned right and tried to ignore the bleating of someone’s horn. Either it was a male well-wisher or she’d stepped in front of someone’s perfectly manicured car. Ms. Virginia Bean liked to think of cars being well manicured, or sloppy, as the case may be, and she was determined that if she could not afford a car of the first variety, she wouldn’t drive her car at all. The rest, shall we say, is history.

Today, Ms. Virginia Bean had an interview with a fellow by the name of Frank Spurt; a funny name for a gentleman purporting excellence in his purified drinking water company. Western Falls was the name, after the bit more classic state name and city of “Idaho Falls,” and bottled water was Mr. Spurt’s game. Ms. Virginia Bean liked water; she drank it all the time, even when she didn’t need to. But drinking water was good for Ms. Virginia’s skin and she knew that she’d look that much younger down the road if she continued to drink it by the bucketfuls. And so she did.

Though she’d had no experience in working at a bottled water company, Ms. Virginia Bean knew about standing on her feet for long hours; and about relieving the customer of his/her unwanted burden that would only cause more problems to the manufacturer if she happened to miss the defect. Ms. Virginia Bean had all the knowledge she frankly needed, or so she reasoned. She was positive she’d get the job and that her past experience would glean the trust the boss would need to hire her. With an added boost of courage, Ms. Virginia Bean walked into the glowing building and looked around.

Thank heavens for air conditioning! The place was spotless, sort of like her home, only better. There were glass tables without a mark on them, and shiny floors without a scratch, and alongside the wall, real plants that needed to be watered. What a joy!

She walked up to the front desk, and seeing no one there, rang the silver bell.

She rang again. The noise sounded more like a trumpet, but Ms. Virginia Bean tried not to let the strong sound startle her.

Finally, an old gentleman in a flannel shirt and long brown corduroys that reached beyond his shoes opened a door she’d never noticed before. He smiled up at her. “An appointment?” he asked. His voice was like water tumbling from a water fall. It was strange, but Ms. Virginia Bean tried not to stare. Instead she said, “Well, why yes. I have an appointment with Mr. uh, Spurt.”

“Yes, yes.” The old gent looked down at something on the counter, something she couldn’t see because of the glare. “Follow me.”

The same door opened. It had no knob, not even a crease was visible to let a person know that the door existed. “Right this way,” he continued as Ms. Virginia Bean followed his heavy steps. They were suddenly in a great room without tables or chairs or anything that Ms. Bean would have previously considered an office. The room consisted of floors that glittered and walls that shone surrounded by a myriad of windows that revealed a menagerie of trees. Nothing else.

After some time another door opened. In it sat a gentleman. This one wore a fisherman’s cap and displayed a smile like someone who’d just discovered a secret but wasn’t yet ready to let it out.

She sat, for suddenly she could see a white chair in front of his pure white desk.

“We have been waiting a long time for you,” the man said. His voice was different than the first but similar in the way that water was. Instead of a water fall, his voice was more like the sound of water just before it reached the shore. Again, Ms. Virginia Bean tried not to stare. “You’re probably wondering why I’ve invited you here,” he said.
Virginia thought she might have blushed, but she couldn’t be sure. Her feet were moving on the shiny floor, they were hard to keep still and she forced her hands to sit quietly on her lap. For some reason, this man demanded attention, and not just because he was the boss.

There was a moment or more of silence.

“I’m here for my interview,” she said.

“Yes, the interview.” He smiled, and she could see love in that smile, if such a thing as love in a smile is really possible. The smile lit up his blue eyes and drifted into her heart. The feeling made her happy and sad at the same time. It was strange and wonderful.

“As I said, faith,” the old man answered. From some unknown place he handed her a rock. It was white and smooth and she could see tiny silver veins like a hand within it.

“I thought you bottled water here,” she said.

“Well, yes,” the man answered. “Lots and lots of water but take the stone, it’s your first after all, and you’ll need it to find that job.”

Ms. Virginia Bean didn’t know what to say. She’d come to this strange place for an interview and all she’d managed to get was a rock? But she held out her hand and took the rock anyway. It was warm and light in her hand and she felt suddenly younger than her 35 years.

“Now, this stone is special,” said Mr. Spurt. “If you listen closely, the stone you hold will tell you what you need to know.”

“That’s crazy,” she said without thinking.

The man smiled, lighting up the room. “Not crazy, special. If you listen, you will not only hear what you need to do, you will begin to have the faith to do it. Listening is the first stone of five from David’s bag.”
“The first…what?”

She sounded like a broken record, one of those vinyl disks that nobody used anymore to play music. Everything was so high-tech, so other-worldly, so…

“Your mind is racing,” said the man. “When you slow it down, you can hear. See this room? Feel how quiet it is?”
Ms. Virginia Bean tried to slow down her feet. She tried to grip the arms of the white chair and suddenly realized there weren’t any arms.

The old man laughed. “You don’t need to be afraid, Virginia, all you need is a listening ear; a moment that you can hear the voice.”

The man nodded and stood. Ms. Virginia Bean followed; it was the right thing to do. She held the warm rock in her right hand, and as she did, something happened.

“You are also beloved,” a voice said. It came from the stone.

The voice startled her, but only for a moment. Something like light ran up her right arm and entered her heart. When the feeling ended, she was still holding the stone and the man at the desk was gone.

About the Author:
Kathryn Elizabeth Jones is the owner and editor-in-chief of Idea Creations Press, a publishing services company offering writing, publishing and marketing services to writers and non-writers alike. She is also the author of six books. Learn more at http://www.ariverofstones.com

Links to Purchase eBooks
Link To Buy Conquering Your Goliaths: A Parable of the Five Stones On Amazon