You are here: Home / Fiction / Confessions of a Carnivore by Diane Lefer 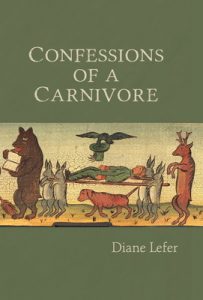 After Rae’s ear is shot off by a jittery security guard at the health food store, the
insurance settlement allows her to take a year off from teaching. She spends it
volunteering at the Los Angeles Zoo. Except for her best friend Jennie, Rae has little
use for human beings. She loves cats–lots of cats. The refugee she cares for, airlifted
from Afghanistan to safety, is not a person but a mountain goat.

As the US goes to war and baboons fall deeply, tragically, in love, Rae’s
involvement with Gorilla Theater–street agitators raising awareness of animal rights–
leads inexorably to confrontations over human rights. Especially when Jennie is
disappeared.

Confessions of a Carnivore is an antic romp through a minefield, a novel about
animal behavior, endangered species, endangered democracy, and love.

What Inspired You to Write Your Book?
When I first relocated to Los Angeles 20 years ago I began volunteering with the animal behavior research team at the zoo. We all got used to describing behavior at times in very graphic terms, taking it for granted, and then I'd see how people outside our little world reacted if I talked about our work. It made me realize there was potential for humor. I knew I would use that someday.

Spending so much time with zoo animals and with my beloved cat Desi I also wanted to write about nonhuman animals as individuals. The individual matters, not just the species. Also, I hate it when authors use animals as metaphors. They are as real and three-dimensional as we are and I wanted to share as much of their reality as I could.

Then the US went to war in Iraq. There was so much secrecy about prisoners, the detention center at Guantanamo was such an illegal maneuver, I knew people were being tortured long before the photos came our of Abu Ghraib. When I'm in despair over human behavior, I often find solace among the animals, and so the novel came to be as my characters concerned themselves with the well being of nonhuman animals while unable to escape the effects of people politics.

How Did You Come up With Your Characters?
I knew there would be a lot of politics in the book and I didn't want to get preachy or boring. If there was rhetoric, I wanted it to be for comic effect. So I decided my narrator, Rae, would have to be apolitical, who would talk the talk only to be intentionally annoying. She's a foil for her best friend, Jennie Kim, who takes the political moment very seriously. LA is such a multiracial, multicultural place, I knew the human characters – especially the animal rights activists in Gorilla Theater – would reflect that diversity. The many cats in the novel are all composites of cats I've known while the zoo animals are drawn from real life. The drill baboons Michael and Melissa really were in love, challenging conservationists who are focused on species survival rather than on individual happiness.

Is this book in Kindle Unlimited? I’m not sure