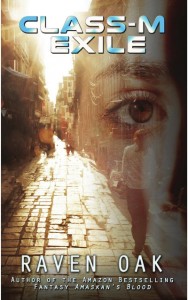 Class-M planet in the middle of no-where. Dust, dust, and more dust. Unless ya circled ‘round to the more habitable region, you’d be stuck without a ship to anywhere. ‘Round the corner though, you could find everything from ship parts and dried food packs, to roast dog and the rare bi-cycle. Hell, you could even buy yerself a gen-u-ine religion if you were so inclined.

The ultimate tourist trap. And here I’d taken the bait.

When Eerl stepped off The Marzipan, he was one of a billion tourists on Bay-zar. He expected to shop for rare artifacts from war-ravaged Earth and maybe study at the grand library, but not even his background in Human Studies from the University of Tersia could prepare him for what came next:
A military beefcake with a grudge, a wartime conspiracy, a stolen ship, a galaxy full of prejudice, and at the center of it all, a young human named Mel in
search of the truth.

Her search for her past and his quest for knowledge take them across the stars as they uncover the darkness and fear in us all.

What Inspired You to Write Your Book?
When I was in middle school, I watched an entire school alienate and ostracize another student solely because she wasn’t a conservative Southern Baptist. The way they treated her stayed with me as I grew up. During a master writing class with science fiction grand master Connie Willis, we were asked to take an event that scared us and shift it into a science fiction or fantasy setting. Class-M Exile is the result of that writing exercise. (You can read more about what happened in other interviews linked to on my website.)

How Did You Come up With Your Characters?
Mel was influenced by the girl in middle school who was alienated. Eerl became a mix of traditional Texan and alien. It was interesting writing an alien with a Texas accent. (He studied humans, who were thought to be extinct, but his only resource materials were spoken with a Texas drawl.)

Book Sample
Bay-zar.
Class-M planet in the middle of no-where. Dust, dust, and more dust. Unless ya circled ‘round to the more habitable region, you’d be stuck without a ship to anywhere. ‘Round the corner though, you could find everything from ship parts and dried food packs, to roast dog and the rare bi-cycle. Hell, you could even buy yerself a gen-u-ine religion if you were so inclined.
I wasn’t sure why I’d come here; touristin’ weren’t my thing. Only that I’d never been to Bay-zar, and everyone said ya hafta visit at least once. It wasn’t the humidity that left my noses crinklin’ in the bright sun, but the smell of manure and too many beings as hundreds of heads bobbed up and down in a sea of booths, goods, and tourists.
The ultimate tourist trap. And here I’d taken the bait.
Sweat pooled inside my heavy ship boots. Other tourists from the ship bumped ma elbows as they disembarked The Marzipan (don’t ask, the captain has weird taste in food, or so I heard). This little squirt elbowed his way past me and half-a-dozen folks crowded ‘round a blazin’ red booth promisin’ trinkets made of gen-u-ine gold, fresh from the mines of Miral.
I cringed when he hollered ‘bout his silly ideas for usin’ dead folks for energy. I weren’t but three steps away from this fool when a white-hooded figure shoved its way through the crowd.
She skidded to a stop just inside my personal space. “Ever been to Bay-zar?” she asked with a quick glance over her shoulder. Two beefy men carryin’ scowls were comin’ in fast ‘nough to knock over a stand of leafy green somethin’s. Girl leaned close to me like we was kin, and my frame hid her as them military beefcakes passed.
Every race, religion, creed, gender, species, and nationality in over a hundred worlds traveled through Bay-zar, or so I’d heard, but never before had I seen her kind outside a book. Hell, I didn’t think they even existed no-more.
A departin’ shuttle sent a cloud of dust skitterin’ ‘cross us, and her hood fell back. Whispers moved ‘cross the market like rain—first as tiny droplets, mostly ignored ‘til the downpour caught everyone off guard. Then all motion stopped. The market’s chatterin’ and clankin’ died as all focus shifted to her. One of them fancy gentleman tumbled over a child in his attempt to flee. Some three-eyed creature let loose a half-cough, half-scream as it raced up the ramp of The Marzipan.
“What?” I asked. “She’s just a hu-man.”
“B-but look at her! She’s only got two eyes!” a voice cried out.
“Yeah, and two legs. Who uses two legs anymore?”
The cries from them tourists continued, but the female hu-man stood there in cargo pants and a tee-shirt that read, “A woman without a man is like a fish without a bicycle.”
To them, she was the plague. She was a one-way trip into the flames of a dyin’ sun.
And she was awesome.
I didn’t know what a fish was, and I’d never seen a real bi-cycle, but by golly, I was gonna find out.