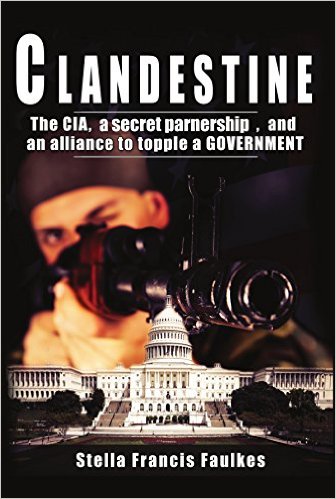 About Clandestine:
When Venezuela’s new president seizes control of oil platforms belonging to US companies a cryptic and powerful international organization decides a change in government is in order for the South American nation.
Established as a front for the CIA to combat the spread of communism to Europe in the aftermath of WWII, the Center for Labor Unity is a powerful force, capable of operating outside of government controls. The CLU’s most efficient operative is Andy Wayne, a capable agent for change who proved himself in Tunisia in the months leading to the Arab spring.
Charged with inciting revolution, Andy enters Venezuela with two allies: Joyia Gabreille, a beautiful representative of Brazil’s national union, and Dane Sinclair, a seasoned operative more than capable of handling the necessary violence that accompanies regime changes.
Unknown to Andy, the US president’s chief of staff wants the mission to fail. To accomplish this, he’s sent a former CIA assassin to South America. Her mission is simple: permanently retire Andy Wayne.
Clandestine reveals a world where international politics hinge on the pervasive influence of powerful labor unions, and ideologies clash for control of the hearts and minds of entire nations.
Top Customer Reviews
Political Intrigue, Suspense in a Power Struggle between Labor Unions, Government Duplicity and Humane Ideologies
By Richard R. Blake VINE VOICE on October 8, 2015
Format: Paperback2 of 2 people found this review helpful
In “Clandestine” Stella Francis Faulkes carefully introduces background material to establish a complex plot of international politics, government duplicity, maneuvers to counter attach terrorists, the Muslim brotherhood, and other extremists in an effort to gain dominance in the leadership of a one world government, in the guise of embassy business.

Andy Wayne, protagonist, an outstanding agent for Center for Labor Unity (CLU) is on assignment in Venezuela to bait and incite a revolution against their new president; who has overtaken oil operations belonging to U. S. companies, Joyia Gabreille, a stunning representative of Brazil’s national union, and Dane Sinclair, a seasoned operative, willing to resort to violence to get desired results, are assigned to aide Any in the effort.

Behind the scenes Ezekiel Jones and Koshka Whitehall, the CIA/ CLU, and Peter Abercrombie, President Barnard Christophe’s chief of staff, in an effort to divert adverse attention on the Venezuelan uprising before it starts; contract Denise Menon, a former CIA agent, and freelance assassin, to eliminate Andy Wayne, permanently.

Faulkes is careful to provide a balance of background information in an effort to set the scene for the story line.

Her multifaceted characters are believable. Her plot is complex with fast moving action and cutting edge themes of political intrigue, international economy and trade agreements, civil unrest, and revolutionary movements.

“Clandestine,” has potential to become a trilogy, with movie possibilities, or as a TV series and is destined to establish Stella Francis Faulkes as an award winning author bestselling author.

A complimentary copy of this book was provided for review purposes. The opinions expressed are my own.

Find Out Who is Really Behind that Riot or Revolution (and Why)
By Erika Borsos VINE VOICE on September 29, 2015
Format: Paperback2 of 2 people found this review helpful
Current headlines and news stories about riots and revolutions in far off places in the world makes one wonder, are these events spontaneous due to regional conditions? Or is there an organized global effort by unknown hidden agencies or organizations that seek to destabilize and destroy the world as we know it? Is there a sinister, frightening force at work which is growing in momentum that guides, directs and manipulates the world’s economies and distribution of resources? This fictional novel written by Stella Francis Faulkes answers some of these questions for the reader. The author has written a mesmerizing, jaw dropping, action packed global political thriller which will keep the reader hooked on every word which reveals spell binding events of global proportions. Most readers will continue reading well into the wee hours of the morning until all of the answers are discovered and most of the mysteries are solved. The author leaves just enough of a mystery and unresolved issues, making the reader want to read more which may well be the topic of her next novel as this book absolutely requires a sequel and more than one at that.

In the introduction, Ms Faulkes provides accurate historical background research and describes true events about the rise, achievements and activities of union leaders who 50 – 70 years ago organized workers in the United States to achieve unprecedented benefits in the workplace. Some of these leaders had backgrounds as Socialists and even Communists but as times changed so did their political leanings and several ended up staunch pro-Capitalists, firmly entrenched and supporting the current political system that had power at the time. The author uses this information to create realistic sounding U.S. government agencies and non governmental organizations, all of which support questionable activities around the globe and upon which this novel is based.

The sole purpose of these agencies and organizations is to encourage and foment uprisings and topple dictators who do not support U.S. policy and interests as well as the unofficial one world government which is slowly evolving. What used to be covert activities done by the C.I.A. in the past, has now been usurped by groups who engage in activities that are undetectable and untraceable. The agencies and organizations have innocent sounding names and on the surface, promote highly laudable goals and initiatives but the added kicker is that one agency does not know what the other one is doing. In fact, the sole purpose of one may be to deliberately sabotage the goals of the other, even to the point of assassinating the operative on assignment in a far off country. Obviously, each agency differs also on what the exact defintion of the term “U.S. interests” means.

The author has created realistic complex characters both protaganists and antagonists, each with great depth and obvious personality traits. The plot is complicated and sounds highly plausible. The descriptions of actions and events both in Tunisia and Venezuela where most of the tensions, clashes, and under cover operations occur are fascinating and spell binding. Just when you think it can not get any more interesting, the author throws in a twist which magnifies the tensions and provides new avenues of complexity with additional layers for deeper exploration and the possibility to discover previously unconsidered resolutions. What is most astonishing is how the author weaves a mysterious stranger into the plot toward the end, who it turns out is the true puppet master, the ultimate power hungry leader, the one who is orchestrating events toward some ultimate end. Once he enters the picture, the reader who up to that point felt the novel was winding down to a satisfactory conclusion is held in suspense, with more questions left unanswered with another mystery opening. The author is truly talented in how she builds suspense, creates complex events with multiple layers of depth that can lead to many different avenues of resolution. She utilizes outstanding characters who participate in realistic sounding global political shake-ups with surprises along the way that keep the reader hypnotized wanitng more. She leaves one mysterious stranger in the background who opens the door to becoming the subject of another episode in this most outstanding novel which should become a series. This reader highly recommends the book and received a complimentary copy in order to write this honest review. Erika Borsos [pepper flower]

Clandestine – Intrigue and Suspense.
By Brian D. Hickey on October 16, 2015
Format: Paperback Verified Purchase
This is a great story about a little known connection between the CIA and the Labor Unions. The characters work to foment a government overthrow in South America through very familiar methods (seen frequently here). Andy Wayne and Joyia work together with Dane and others to carry out the directions from a secret board to instigate revolution. There is action, there is drama, there is plenty to keep you glued to the pages. Quite a few twists will also add to the suspense as the story unfolds.

I recommend this book for anyone who loves intrigue and especially those who can appreciate that reality is very close to what you read here. The author actually has a bibliography that is substantial to demonstrate her depth of knowledge and to allow you to grasp where the details of the story evolve from.

I can’t wait for the next installment!

Link To Buy Clandestine On Amazon