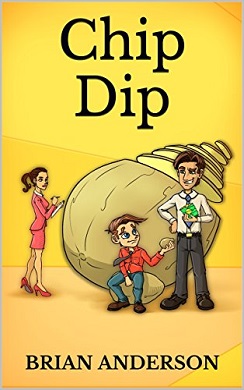 Edward Thrornsticker is a bumbling slacker with no ambition and even less drive. Lucky for hi, Crispy Crunch Snack Food Company is the perfect place to while away his days watching cat videos, hiding problems from his boss, and generally doing as little work as possible. But when his boss is fired for corporate fraud, Edward suddenly finds himself in charge of the floundering Detroit business. As it spirals deeper and deeper toward bankruptcy, Edward and his compatriots, all just as incapable as he is, flail from one absurd situation to the next, groping for a lifeline to save both the company and their jobs.
But with corporate hovering overhead, just waiting to shut them down, what hope does a simple office worker have?

What Inspired You to Write Your Book?
I love humorous fiction, such as that by Donald Westlake and Carl Hiaasen, but I feel that this genre is underrepresented in today's market. I was inspired to write a novel that people would find light and enjoyable, and would leave them chuckling.

How Did You Come up With Your Characters?
My characters are based on the wide variety of people that I encounter throughout my day.

Book Sample
The bleating of his desk phone jarred Edward Thornsticker from his computer, where he had been mesmerized by an adorable YouTube clip of a dancing cat. The phone's caller ID indicated Happy Hal's Midtown Market, bringing a dull ache to Edward's gut. Although he had been at Crispy Crunch Snack Foods for only a few months, he understood by now that a call from one of their customers invariably meant that he would soon find himself dealing with some type of impossible complaint.<br />
The complaints he had fielded in this short time spanned an incredible spectrum: potato chip bags completely devoid of potato chips, packages that appeared to have been flattened by steamrollers, entire cases of chips seemingly unsalted and uncoated, shoplifting delivery men, and even one driver who managed to smash his Crispy Crunch truck through the massive plate glass window fronting their customer's establishment. His stomach flitted as he wondered what problems this new caller might bring.<br />
"Crispy Crunch Snack Foods, this is Edward speaking."<br />
"What the hell is going on with you people?" belted Happy Hal.<br />
Edward grimaced. "Is there a problem?"<br />
"You're damn right there's a problem. I was promised that my delivery would be here first thing this morning, but now it's almost noon, so where the hell is it? Don't you realize that my snack shelves have been bare all morning?"