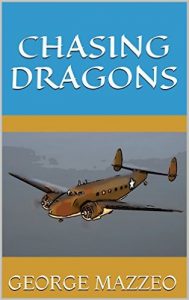 In the aftermath of World War II, recently discharged Army Air Force pilot Duke Kellogg and his fledgling airline find themselves embroiled an adventure involving intrigue and missing treasure. The legend of the Golden Dragons has been debated from bar stools throughout the South Pacific for years, but most believe it to be nothing more than a good yarn. When a mysterious woman enters the Coral Pacific offices and claims to be the fiancée of a missing courier on a secret mission carrying gold to Chiang Kai-Shek, she sets in motion a series of events involving, deception, mystery and hair raising exploits. Through it all Duke, his copilot, Edwina Watt and flight mechanic Nick Minetti struggle to uncover the truth and survive while Chasing Dragons.

What Inspired You to Write Your Book?
I have always been fascinated with the islands in the South Pacific that were crucial to the Allies in WWII. I have also had a lifetime interest in aviation, so it seemed logical to put the two together. I wanted a unique feel to the project…something retro, like a 1940’s movie serial. Chasing Dragons is the result.

How Did You Come up With Your Characters?
I needed a hero, a strong female character and a dependable sidekick. Opposing them I needed two mysterious characters…were they who they claimed to be or something else. From there I fleshed them out based on personal experiences with people who embodied the characteristics I wanted in them.

Book Sample
PROLOGUE
In the summer of 1944 the Allied operation in the China-Burma-India (CBI) Theater was in turmoil. U.S. Army General Joseph “Vinegar Joe” Stillwell and Nationalist Chinese leader, Generalissimo Chiang Kai-Shek were at loggerheads over strategy for combating the Japanese offensive in China. Stillwell favored a massive reformation of the Chinese Nationalist Army and an alliance with the Chinese Communists, led by Mao Tse-tung, to mount an offensive against the invaders. Chiang opposed both. Reformation would mean the dismissal of many officers whose support was essential to holding together his fragile coalition. Furthermore, he had no intention of aligning with the communists with whom he knew he would soon be locked in a life and death, post war struggle for control of the country. Chiang favored a policy proposed by U.S. Army Air Forces Commander, General Claire Chennault to fight a primarily defensive ground battle with the support of U.S. air power. Chiang supported this approach because it allowed him to conserve his forces and equipment against the time he would need them to battle the communists.
After the fall of Burma and the closure of the Burma Road, both sea and land logistic lines to China were severed. The only means of resupply was the limited and dangerous airlift over the Himalayas from India known as “The Hump.” This restricted logistics line could barely resupply Chennault and allowed only small assistance to Chiang who became increasingly frustrated with the lack of support. Stillwell was unsympathetic because he felt that most of the resources devoted to Chiang were being squandered by corruption or hoarded.
The War Department became increasingly alarmed that the personal antipathy between the famously tactless Stillwell, who referred to the generalissimo as Peanut, and the easily slighted Chiang might drive the Nationalist leader to seek a separate truce with the Japanese with disastrous implications for the overall war effort. It was imperative, not so much to defeat the Japanese in China, but to keep them engaged. Every man and every round the Japanese had to commit in China were assets that could not be brought to bear elsewhere against the Allies.
By October 1944 the situation had become untenable and the War Department was forced to recall Stillwell. However, the flow of resources could not be increased. A plan was hatched to appease Chiang by providing him with$1,000,000 in the form of 1800 pounds of gold. The money to be used to buy the loyalty of subordinates and procure supplies on the black market. In was to be the first installment in a series of ten planned payments.
The San Francisco mint was commissioned to mint 2,500, four ounce gold coins imprinted with the image of Generalissimo Chiang on one side and a fire-breathing dragon on the other. The coins were then loaded on a C-47 at Hamilton Field outside San Francisco for shipment to Hawaii and then via the South Pacific Ferry Route to New Caledonia. From there it would be transshipped to another C-47 dispatched from Assam, India for delivery over “The Hump.”
To maintain secrecy, the coins were loaded in 51 standard .50 caliber ammunition boxes, each containing 140 coins and weighing 35 pounds…the same weight as a box of .50 caliber ammunition. An additional 51 boxes of actual ammunition were loaded, distinguished from the boxes containing the coins only by the lot number stenciled on the side. An armed courier, actually an OSS officer, was assigned to the mission to keep an eye on the gold. As a cover story, he carried a classified communications pouch which contained nothing but a copy of the San Francisco Chronicle. The flight crew was to have no knowledge of their cargo. The presence of a courier was not unusual and aroused no suspicion.
The mission proceeded uneventfully to Hickam Army Air Field in Honolulu, then along the South Pacific Ferry Route: Christmas Island-Canton Island-Fiji-New Caledonia. When the plane was met in New Caledonia by a second OSS officer, assigned to affect the transfer to the Assam-based aircraft, he was surprised to discover that the courier was not aboard. Furthermore, an inspection of the cargo revealed that four gold bearing boxes were missing. In their place were four boxes that contained ammunition and had a lot number not on the manifest.
The three crewmen were placed under arrest and questioned. All denied any knowledge of the missing cargo, valued at nearly $100,000, nor could they shed any light on the whereabouts of the missing courier. When he had failed to show for their scheduled departure from Canton they assumed that had been his intended destination and, after a brief delay, continued on with the mission. After a lengthy interrogation, they were relieved from duty and shipped back to Honolulu under guard pending further investigation.
The remaining gold was delivered to Generalissimo Chiang Kai-Shek twelve days later.