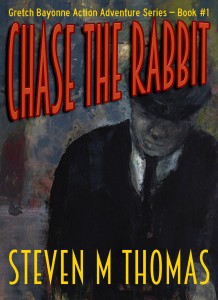 From the barrooms of New York City, to the movie studios of Hollywood, Steven M. Thomas has crafted a tale of intrigue that captures the early 1930’s as freelance writer Gretch “Bay” Bayonne attempts to unravel the mystery of why a dedicated family man would abandon his life for no apparent reason. Along the way he encounters movies stars, Nazis, and newspaper tycoons, and barters a banana for a mysterious gold key stolen by a runaway monkey on a walkway atop the magnificent dirigible Graf Zeppelin. This first book in the Bay series is sure to grab readers from the first page and will not let go until the last!

What Inspired You to Write Your Book?
I had just published my autobiography, “I Was A Drummer She Was A Dancer” and knew then that I had to write a novel. An author friend and mentor of mine gave me a writing assignment to write a short story and gave me the topic of “flirty women.” What started out as a short story turned into a novel. I have four of them written in the series and am working on the fifth. I had found my main character, and the rest came naturally.

How Did You Come up With Your Characters?
The main character is a composite of many. Think Humphrey Bogart meets Hunter S. Thompson. Many of the others are based on Hollywood stars of the 1930’s. Not to mention the old man, William Randolph Hearst. Others are Nazis before that became known as a bad thing. Ah, and there’s Patricia. The women he falls instantly in love with. She was based on Marion Davies.

Book Sample
Yes, this is an odd way to make a living my friends, but we live in strange times. The roaring twenties fizzled out like a bad firecracker on a rainy summer day. It all happened in 1932. Nothing would be the same for anyone after 1932.
My name is Gretch Bayonne, but everyone calls me Bay. I write stories. No, I am not a reporter. I could never hold down a real job, so I freelance for magazines, newspapers, and anyone willing to pay me to chase the rabbit. It’s easier for me that way. Just give me an assignment and I will grab it by the throat and shake a story out of it.
I haven’t had an original idea since I was thirteen and wondered how long it would take for a Packard to float down the Hudson River before it sank with me and my buddy Hobbs in it. It turned out the answer was all the way to Hoboken. And by then the cops were waiting for us.
We didn’t get out of the home for boys that much, but when we did, well, all hell could break loose. We’d been stuck there for a long time and figured why not go out and borrow an automobile and drive in into the river? What could they do to me? I was already in an institution. And it might make for a good story. That day reminded me of how I got there in the first place, four years earlier.