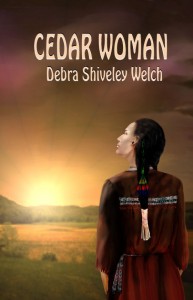 Winner of the Best Native American Fiction Award 2011, Cedar Woman is a powerful book filled with courage, romance and the beliefs, ceremonies and language of the Lakota Sioux.

Travel with her to Columbus, Ohio as she rebuilds her life, and the lives of her family. Join her in the sweat lodge as she follows Zitka Mine to the fifth step of the edge of the world to find her father’s soul.

Join her at powwow where she meets her half side. Consultant Julie Spotted Eagle Horse, descendant of Chief Spotted Eagle and Crazy Horse.

What Inspired You to Write Your Book?
“Cedar Woman” is a project I have wanted to work on for several years. Written with the help of my adoptive sister, Julie Spotted Eagle Horse Martineau, it is a book which I have thoroughly enjoyed writing.

I asked my sister to act as a consultant. I did so because I didn’t want to write about the sacred things which are not supposed to be written about and I wanted to write about those which I could with utmost authenticity. I also wanted to make sure that I represented the Lakota people with the deepest respect and honor.

Within “Cedar Woman” you will find many words of the Lakota Sioux. Pronunciation and meaning is included the first time each word is used. There are three dialects in the Lakota language and no standardized spelling. I have chosen the spelling and pronunciation of these words in keeping with the dialect of my sister, Julie Spotted Eagle Horse Martineau, who is of the Lakota Plains Native Americans.

Powwow is described in detail, as well as the various forms of regalia, etiquette, music, and as with any ethnic festival – the food!

My son and I have attended the Muddy River Powwow for many years, and in doing so, have come to know and love our adoptive family; they have brought us much joy. This book was written to honor them.

I hope you enjoy “Cedar Woman.”

How Did You Come up With Your Characters?
I always draw from people I already know, so once my storyline is established, I begin to flesh out my characters. Using a “character sheet,” I write down the name, age, hair, eye coloring, temperament, hobbies, likes, dislikes, again drawing upon people I know.

In “Cedar Woman,” I then needed to obtain authentic American Indian names. A person’s name is based on who they are and is only given after meditation. Additionally, it can only be given by a medicine man and the matriarch of the family, or it can be inherited. This was a very important part of naming a person and has to be respected, no matter if the book is a biography, or any non-fiction work, or fiction.

Book Sample
Half Side

Walking the path of my ancestors,
I bow to tradition,
And become Sioux once more.

Seeking, but not knowing
What it is I seek,
I search within myself
And find only a longing.

A chance encounter
Reveals a destiny,
In the touch of a hand….
The flash of a smile.

Our eyes meet across the arena,
I duck my head…
Knowing but not seeing,
What lies before me.

Love at first sight,
Thought to be a myth,
I find myself confronted
With a glorious truth.

A sacred touch
From Creator above,
Two souls become one
And Half Sides are found.

Lena sat outside of Julie’s tipi, a cup of Starbuck’s coffee nestled within the palms of her hands. Dawn was just breaking, and a sky of china blue and tender pink was beginning to emerge.

Dreamily searching the heavens, her breath caught within her throat. A single, white cloud, edged in pink, contained a smudge of apricot, as if Creator had wet his thumb and smeared the upper layer of the cloud to reveal the tender pastel color beneath. The effect was that of stained glass, ethereal, tender, unworldly.

Was it an omen? What did today hold for her? Lena felt a sense of urgency, a feeling of expectancy. The very air was full of portent.

****
Her path is not just with The People, Julie thought to herself. My path is here, learning the ways, living my life here among my own kind, but this wincincila will walk with all people.

Julie stood at the opening of her tipi, watching Lena as she gazed into the tender dome of Heaven. An overwhelming feeling of change washed over the stately matron. Turning to enter her lodge, Julie paused and looked again toward Lena. She gave an inward gasp. Lena sat within a nimbus of light, her beautiful hair floating on the fragrant morning air.

About the Author:
Debra Shiveley Welch was born in Columbus, Ohio and has lived in the Greater Columbus area all of her life. She now resides in Central Ohio with her husband, Mark, and their son, Christopher, also a traditionally published author.

Debra is an Amazon Best Selling Author of 14 books and the recipient of the FaithWriter’s Gold Seal of Approval, Books & Authors Award of Excellence recipient, Books & Authors Best Non Fiction Book – 2007, AllBooks Reviews Editor’s Choice 2010 and Books & Authors Best Native American Fiction 2011. Her books include: “Cedar Woman,” her solo novel, made its debut in December of 2010 and recounts the story of a daughter of the Lakota Sioux who opens the first Native American restaurant in Central Ohio and won Books & Authors Best Native American Fiction 2011; four time award winner “Son of My Soul – The Adoption of Christopher,” released during November, National Adoption Month in 2007 and a Best Seller on Amazon within the first week of its release and soon to be available in audio; “A Very Special Child,” an award winning Best Seller on Amazon America and in English at Amazon Japan. “Jesus Gandhi Oma Mae Adams,” Debra’s first novel, co-authored with Linda Lee Greene, an Amazon Best Seller as well. “Christopher Meets Buddy,” a children’s book about the proper care of a pet bird, is the second book in the Christopher Series. Printed in full color, it is an excellent guide if you are considering buying a pet bird.

All are available through Amazon in Kindle or paperback and your major book stores.
To view her other works, visit her author page on Amazon.

Currently Debra is working on “Spirit Woman,” a sequel to “Cedar Woman,” “Christopher’s Family Table,” a companion cook book to “Son of My Soul – The Adoption of Christopher,” which she is co-authoring with her son, “My Cousin My Son – A Story of Adoption, Motherhood and Kinship,” a sequel to “Son of My Soul,” and “Heads Are Gonna Roll,” an ambitious tale weaving English history, reincarnation and murder.