In the mid 1600’s, when King Charles I reigned England and pirates controlled the seas, twins separated at birth are reunited under dire circumstances in the sleepy town of Port de Couler de Bateaux, Port of Sinking Ships. Jacqueline and Alexandria settle into the Midway Zebra inn with their new surrogate parents, innkeepers Jemima and Fred Bumbleridge. Eight years later, the inn burns to the ground, taking the beloved Bumbleridges with it. The twins are abandoned once more, but their guardians … END_OF_DOCUMENT_TOKEN_TO_BE_REPLACED

Two men looking for redemption search for a missing child who, if discovered, may lead one of them to a Divine encounter. http://www.facebook.com/GodComplexBook http://www.derangedserenity.com/ Trevor Hallam is concurrently working on his second novel and a novella, both of which have ties to his first novel, God Complex. He lives in Alberta, Canada. … END_OF_DOCUMENT_TOKEN_TO_BE_REPLACED

OMG is a fast-paced time travel action adventure about four teens who travel back to the past to solve a mystery and save a life but end up risking their own. OMG begins when Kelly moves to Fort Myers Beach, Florida to live with her aunt and finds hidden treasures and secrets. She quickly becomes friends with her quirky next door neighbor Scott who has a reputation as the school’s number one geek. Scott’s best friend is Austin, the hot and popular quarterback. He joins Scott and Kelly as they … END_OF_DOCUMENT_TOKEN_TO_BE_REPLACED

When Tess Tremaine starts a new life in the colorful town of Goose Pimple Junction, curiosity leads her to look into a seventy-five-year-old murder. Suddenly she’s learning the foreign language of southern speak, resisting her attraction to local celebrity Jackson Wright, and dealing with more mayhem than she can handle. A bank robbery, murder, and family tragedy from the 1930s are pieces of the mystery that Tess attempts to solve. As she gets close to the truth, she encounters danger, … END_OF_DOCUMENT_TOKEN_TO_BE_REPLACED

Zeke is a dark novel of sexual obsession, psychological manipulation, and looming peril. Sue Cox is a naive college student who falls for the exciting new clerk at the local used bookstore. Captivated by Zeke’s brooding good looks and menacing but irresistible charisma, Sue capitulates to his will, leaving her wide open for exploitation. Zeke begins to exert subtle control and entices her to leave town with him. As they travel, his behavior grows more deviant and increasingly … END_OF_DOCUMENT_TOKEN_TO_BE_REPLACED

Nine Romantic Stories brings together nine tales of contemporary women in loves-- some stories were previously published and a few are brand new. From the mysteries of young love to the world's most horrible wedding proposal, the collection offers a mix of light and dark, tears and laughter, all intended to charm and entertain. Targeted Age Group: adult women How is Writing In Your Genre Different from Others? These stories are real literary fiction with a romantic outlook., an outlook … END_OF_DOCUMENT_TOKEN_TO_BE_REPLACED

Abby Carpenter is a woman with a few problems: A little red diary that shows up at the worst times, a sleazy coworker trying to sabotage her career, and a philandering, soon-to-be ex who won't stay dead. Just when things seem to be going her way, Abby's ex shows up dead, really dead, and she becomes the prime suspect of the murder investigation. With the law on her heels, and an old flame being reignited, Abby finds herself pursued by a relentless detective, a sleazy reporter, and a man … END_OF_DOCUMENT_TOKEN_TO_BE_REPLACED

Follow me, Jonny Rowe, on a wild goose-chase from Ireland to the USA with my American grandfather's remains in my red birthday balloon. I use 'remains' in the loosest sense of the word: my grandfather, 45, puffed his last breaths of air into my birthday balloon before suffering a massive heart attack right there at my birthday party which becomes my deathday party. Feeling responsible for 45's death and as a thank-you for filling Clinical Dad's void after leaving that questionable suicide … END_OF_DOCUMENT_TOKEN_TO_BE_REPLACED

Suburban Task Force is a humor filled, high octane, action-comedy. It follows Jade Lydell, who at thirty one finds herself living the surreal life of a married suburbanite. Her simple, and now materialistic days are busy with shopping, drinking and playing with couples that live the same high-end lifestyle. It takes a home invasion scare and a co-workers brutal mugging to wake Jade from her suburban slumber. The adventure begins when she and her two best friends forgo an uplifting spa retreat … END_OF_DOCUMENT_TOKEN_TO_BE_REPLACED 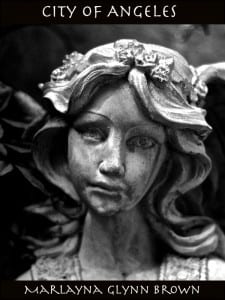 City of Angeles is the second book in the trilogy Memoirs of Marlayna Glynn Brown. Continuing her remarkable journey in staccato prose, author Marlayna Glynn Brown reveals the underside of a life lived in 1980s Los Angeles, picking up from the moment in which Overlay ends. This searingly written, often bizarre story of her teens and twenties reveals the author's flight from the glitz of Las Vegas to the formidable world of self re-invention among the angels and demons populating … END_OF_DOCUMENT_TOKEN_TO_BE_REPLACED