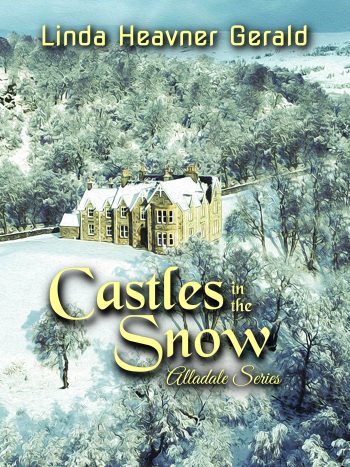 Castles in the Snow, a Thrillers/Suspense novel, follows the real-life of my friend, Paul Lister, who was kind enough to allow the setting to occur inside his beloved 23,000-acre estate at Alladale, a European Nature Reserve and Trust at Inverness Scotland. Although the story is riveting, while transitioning from Scotland to Charleston, SC, the added dimension of facts and actual events add to the allure. Within this 61,213-word manuscript exist the realities of a planet out-of-control as we over-forest, fish, and abuse her. Paul’s desire to return the wolf to a controlled environment inside his estate becomes a part of this book.

What Inspired You to Write Your Book?
Castles in the Snow, a Thrillers/Suspense novel, follows the real-life of my friend, Paul Lister, who was kind enough to allow the setting to occur inside his beloved 23,000-acre estate at Alladale, a European Nature Reserve and Trust at Inverness Scotland. Although the story is riveting, while transitioning from Scotland to Charleston, SC, the added dimension of facts and actual events add to the allure. Within this 61,213-word manuscript exist the realities of a planet out-of-control as we over-forest, fish, and abuse her. Paul's desire to return the wolf to a controlled environment inside his estate becomes a part of this book.

How Did You Come up With Your Characters?
While thinking of the beautiful, Alladale, these characters easily came to my mind. They belong there.

The scent of fresh heather soothed my agitated spirit when I opened my eyes. That familiar herb-like smell calmed me. A pretty blue pot sat on a table beside my bed. It contained the heather’s tiny cup-shaped, pink-purple flowers. Their beauty made me smile—a memory of long ago rushed into my head.
Many blurred images in my head matched the haziness of my vision. The room appeared familiar, but the circumstances were foreign. Why are tiny pellets of ice hitting my eyes? Is that the reason I can’t see things well? Something felt terribly wrong. Again, I closed my eyes. Forcing them together accomplished nothing but more fog.
###
I stood with him, my beloved Thomas, atop a snow-covered hill. A stately Victorian lodge smiled at us from the white top across the way.
“Alladale?” I whispered the name as the image of the sprawling manor home filled my senses. It was as though I was seeing her for the first time. “My Love! That is Alladale? I had begun to doubt her existence.”
Those words I now repeated as I had five years earlier. How often have I thought about this moment in time? I wondered.
When I had looked so long ago at the tall, blond man with chiseled good looks standing beside me, I recognized how blessed I was. Yes, we had suffered the painful blows of life but still stood together. Alladale, Thomas, and I, those three, remained a given.
My gaze now darted around the room.
“What is this place?” My words were a mere whisper.
Then I knew. This place is my favorite room in the mansion, the Willow Suite. Does this mean that my brain is functioning? At least a part of me is well?
The color of the heather matched that of the spread covering the generous bed. I reached out to touch the satiny smoothness, which looked familiar, but I couldn’t. Someone had shackled my hands. No panic assailed me from this realization. I breathed deeply.
Yes, that is the pleasing scent of heather. With longing, I reached toward the blooms, but the shackles on my wrists prevented me.
“Thomas, I don’t understand! Where are you? Who has done this to me?”
Once again, I looked around, trying to figure out what was going on. Why would my husband leave me shackled to the bed? I wondered. Intense pain engulfed my arms and legs as well as my head. Perhaps a head injury had resulted in my damaged vision and the tenderness I was experiencing? I closed my eyes.
When I woke, it dawned on me that my surroundings felt comfortable. A blazing fire roared in the massive old fireplace in the room. But, unfortunately, the heat felt too intense. I wished that I could lower the pink-purple spread but remembered that the window above my bed gaped open. That's the reason for the stinging pellets of ice. Although the opening looked small, eventually, as the fire diminished, the temperature would plummet. I struggled to free myself, even though I was certain it was impossible.
A large white pitcher, which contained a small chip, sat beside the pretty blue pot of flowers. For the first time, I felt thirsty. This sensation frightened me.
How much worse will it become? Will I realize each moment as I die from dehydration, starvation, or cold? What about relieving myself? My struggling accomplished nothing. My only choice was to wait. Thomas will return soon, I’m sure of it. Always, he has been my savior.
Like horses charging from captivity, memories abruptly trampled my mind, those of Thom, me, Max, and others. My parents? I smiled, but those fast-moving recollections arrived too quickly; they confused me. It was impossible to figure out what was happening now in the present. I must examine each thought! The realization that taking pleasure in them would occupy my time, thus keeping me from experiencing the terror I knew waited. If instead, I fought to recall the pleasant thoughts, starting with my first memory of my husband, maybe my sanity would be prolonged? Now, what is my first memory?
For a second time, I smiled. Another house, located in a different place, floated into my mind. It wasn’t Alladale. This other place was also precious to me. Grappling with a long-ago event in my life, I reminisced, “Charleston, my childhood home in the United States.”
My words trickled into the heavy air, reinforcing my desire to examine every memory from my past—especially those involving my husband. Each vital moment of my life concerned him. I snuggled under the spread while I tussled with many recollections.
This story is my life: mine and that of Thomas Baxter Reid. Our tapestry of frayed ends would now knit themselves into lovely protection from the lonely agony I faced.
“Am I dying?” But the only thing that mattered to me was his safety.