You are here: Home / Bargains and Freebies / Bargain Books Under $3 / Carrie: An American Classic by David Culp 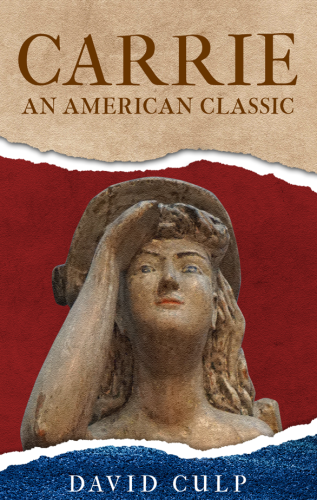 Carrie Larsen left a small town in Ohio a week after graduating college in 1963 to explore the counterculture in the Great American West. Four years later, tired, she came back to her parents’ house. Perhaps for a week? Perhaps for years?
Carrie became the town Veterinarian on Main Street. She balances her enthusiasm for sex, drugs, and rock’n’roll with a search for social justice, compassion, and a love for playing J.S. Bach on her mother’s concert grand piano.
Carrie loves her parents, as long as they last, but resists her mother’s hopes that she’ll get married and have a baby, at least in that order.
Carrie calls herself “A Buddhist, not a Romantic.” She never stops searching. Was life in the West her alternative reality, or is it life in the small town?
Find out what makes Carrie Larsen an American Classic.

Targeted Age Group:: College age and beyond – especially people who lived through the 1960s and 1970s

What Inspired You to Write Your Book?
I grew up on the outskirts of New York City and went to school in Ohio and North Carolina and lived through a lot of the social change of the 1960s and 1970s. I thought about how a person who grew up in small-town Ohio would come through the same experiences I did, and whether moving back home would be a satisfying life. Part of Carrie Larsen’s enlightenment when she comes home is about how the “squares” she thought she’d left behind have a lot of wisdom, love, and compassion to share.

How Did You Come up With Your Characters?
This novel is one of several I’ve been working on about how the kids who grew up in a family in small-town Ohio deal with life when they attend liberal arts colleges and go on to live in a more “sophisticated” society. There’s been a lot of that in the American experience the last 100 years – my grandparents grew up in rural Indiana, my father came from the mid-West to New York after World War II (and married a woman who was the first-generation American daughter of Swedish and Finnish immigrants), and I feel I got a look into some roots when I went to college away from the East Coast. That’s the American experience my main character, Carrie Larsen, is a part of, along with an appreciation of the natural wonders of our continent and the "can-do" optimistic spirit of so many of our countrymen (and countrywomen). I think the way Carrie comes to grips with it is a large part of what makes her an American classic. My first novel, The Book of Mathew L., is about her big brother, who comes from the same small town to become a liberal academic who works in the Great Society in Washington, D.C. and then gets personally involved in social justice causes in North Carolina in the 1970s.