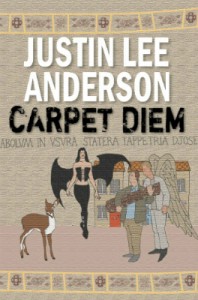 Fifteen years after losing most of his family to a devastating, pudding-related tragedy, Simon Debovar has settled into a life of self-imposed exile from the stinking, selfish morass of humanity. Content that his daily highlights will include hazelnut coffee, a long bath and the occasional jar of olives, his life is completely upturned by the discovery that his ornate living room carpet is the deciding factor in a bet between God and Satan.

When mysteriously well-timed carpet thieves deprive him of the crucial heirloom, Simon is forced to leave his hermit’s existence behind for a world of angels, demons, witches and immortals.

And then it gets complicated.

What Inspired You to Write Your Book?
The original inspiration came from one of Neil Gaiman’s Sandman stories: Calliope. It featured an author who was plagued with a constant flow of brilliant ideas, which he couldn’t write down quickly enough. The ideas were wonderfully off-the-wall and got me thinking in that kind of unusual way. That’s where the concept of a carpet being the deciding factor in a bet between God and Satan came from.

How Did You Come up With Your Characters?
They came from lots of places. Simon is an amalgam of some of the more extreme anti-social aspects of people I’ve known over the years, but his core moral certitude is probably an extension of my own! Harriet comes from the number of strong women in my life, but she’s also a brilliantly cathartic vehicle for being able to say all the things people think, but are usually not expected to say in public! The rest come from all over the place, really – dreams, daydreaming, “what if”? I tend to come up with the basic outline of a character and then let them live in my head for a long time, where they almost literally grow arms and legs.

Book Sample
Fifteen years ago
Harriet woke on the floor; wet, confused and reeking of whisky. This was not unusual.
She wiggled her fingers and toes. They all seemed to be there. With a deep breath, she raised her head off the floor.
Ouch.
Carefully, she rolled onto her side to look around. The gentle crunch of shattered glass made her stop. The off license sparkled under a layer of the stuff. Rivulets of booze ran from the shelves, escaping shattered bottles to pool on the floor.
Sirens.
Harriet pressed herself up onto her elbows.
No glass in the window frame. That explained the floor.
Something was burning. Something big.
She grasped the counter, grunting with the effort of pulling herself up. Fragments of glass rained musically onto the floor. From the new angle, Harriet could see that the wet patch on her stomach was the Lagavulin she had been about to buy. She only briefly considered sucking it.
Her head pounded as her heart forced blood upwards; eyes black, ears squealing in protest. She waited, head hanging. After a moment, black turned to red and the world returned.
There was no sign of the assistant who’d been serving her.
She hobbled to the window. Her balance was less than perfect anyway, and the floor was slick as fresh ice. And her back hurt. A lot.
At least six fire engines across the road.
Blinking, she leaned against the door frame. The air reeked of acrid smoke and this wasn’t the only building that had lost windows. Outside, scattered pockets of hushed witnesses held each other and stared at the chaos across the road.
Across the road.
The hotel restaurant.
The building where she had left her entire family yawned a gaping wound of flame, breathing thick black smoke into the night.
Oh, Hell.
Harriet lifted the nearest intact bottle – Malibu, more’s the torture – and choked down a glug. She coughed so hard it almost came straight back up. Instead, she snorted black mucus over her hand.
Mindlessly wiping it on her trousers, Harriet sat on the destroyed window display.
Faced with the fact that she was probably the only surviving member of her family, and that she had been perilously close to joining them all in the choir immortal, Harriet muttered the only phrase that accurately reflected the gravity of the situation:
“Fuck me ragged.”
—-
Now
Simon is falling.
This is not in the plan.
Of all the things he had expected to be doing this week, falling off a cliff was low on the list.
Though, to be precise, he isn’t exactly falling off a cliff – he’s falling beside one. He hadn’t been on it to begin with – he’d been above it, and then been dropped. Quite unreasonably. In fact, the whole situation was unreasonable. What had he done to deserve a smashy death on huge, slimy rocks?
Still. It could be worse.
He could have been burned alive in his own living room, or had his head lopped off. At least he’s still alive.
Sighing, Simon resigns himself to his helplessness and waits patiently for a sudden and messy stop – or for someone to catch him.
At what point should he have said ‘no’? This afternoon? Yesterday? Tuesday?
There is no escaping it; the answer is clear. Simon had made one fundamental mistake a week ago, whence all of the ensuing tortures, misfortunes and calamities had emanated.
He should never have answered the bloody door.