You are here: Home / Fiction / Science Fiction / @ by Lee Isserow 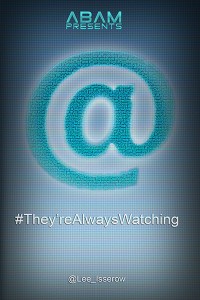 “@” is a fast-paced Young Adult thriller.

21 year old Cassie’s life sucks, so on a whim, she starts farming her decisions out to Twitter.

Before she knows it, the lives of her family and friends hang in the balance, and she’s racing against the clock to discover who’s pulling her strings…

What Inspired You to Write Your Book?
Tragically, this book was inspired by my own Tweets:
(1/2) Sometimes I look at my life choices & consider handing all future ones to my friends…
(2/2) Then I remember who they are, and that it would most likely result in them telling me to punch a policemen, or eat gravel. Again.

A throwaway gag that gestated in the back of my mind as I slept, and the next day I had an outline for something. It felt like it maybe wasn’t a movie, and eventually came to the realization that it was probably a book.

How Did You Come up With Your Characters?
It’s probably not the healthiest thing to do, but I tend to make mental lists of obvious traits and speech patterns when I meet people.

Most of the characters I’ve created have been amalgams of a myriad folk I’ve interacted with over the years, taking snippets from one’s back story, adding trauma from a second, the aesthetics of a third and fourth and the mannerisms of a fifth, putting more and more pieces together until it feels like a fully formed person.

Of course, people invariably notice that their issues are being portrayed onscreen/in writing, so I don’t get invited round to many dinner parties these days…

Book Sample
When the news would report his side of the story, they’d say that James was the inevitable evolution of kids playing records backwards and hearing satanic lyrics. The excuse he had given throughout his trial was that “Twitter made him do it”, and his barrister was trying hard to convince him that a defense of insanity was his only chance.
James didn’t want to be labelled insane, even though he was assured that there was a specific legal definition of insanity at the time of committing the offense, rather than a general label of being completely and utterly mad that would follow him for the rest of his life. He also didn’t know what ‘the rest of his life’ would look like, let alone how long it might be, but could only picture that it would be behind bars.

The Barrister insisted that he be evaluated by three different specialists in mental illness, one after the other returning a declaration that he was compos mentis, and yet James’ reason for the killing was certainly not that of a sane man. The strategy that had been developed by his poor excuse for a legal team was to blame the police. The news crews had been down to the hospital to see him being literally carried out, the cameras had caught the excessive force that was put into action to ‘sedate’ him. They were counting on the current political tide to wash ashore in their favour. The officers had, as the media put it, beaten the sanity out of him.

He sat in court, stringy and gaunt from the barely palatable excuse for food that had been served whilst he was in custody, wearing a cheap grey suit his mother had bought for him from Primark. It was ill-fitting and as he put it, “looked like the sweat shop children who made it weren’t beaten hard enough the day they churned it out on the production line.” His blonde locks were unkempt, his eyes wild and heavy with bags from lack of sleep in the cell. Life in custody didn’t suit him and the rest of his life in prison would be, he joked to himself, ‘a death sentence’. He knew nobody could win his case, and had figured that was the plan. That’s what they wanted for him all along.

Nobody would believe the rantings of a murderer, especially one who held an old lady and a child amongst his captives. He sounded like the deranged offspring of Son Of Sam and Charles Manson, Twitter was his neighbor’s dog whispering words from a demon, it was his White Album full of secret messages in the lyrics that only he could comprehend. His phone, a cheap no frills APEX handset, was amongst the evidence and had been intensely scrutinised by specialists. There was no sign of the Twitter messages in question, no proof that he had been active much on the service, other than to post the occasional rant against the NHS or government. His tweets read like micro-manifestos of an angry anti-governmental, a potential powderkeg of angst and frustration. He pleaded with the Barrister to get someone to investigate further, and they hired techies who went above and beyond, looking through the operating system, the apps, checked his GPS coordinates at the times and dates of the tweets on his profile, and even took the handset apart to trawl through the hardware for potential signs of external tampering.

Of course, they found nothing. His statement remained the same, and was repeated across all the news networks; “young man claims driven to hostage taking and murder by nefarious forces on social network”. Nobody paid attention when he expanded further, tried to explain that it wasn’t just one event, one missing tweet, that they had driven him to it. That wasn’t a sexy news sound bite. As far as James was concerned it was a grand Machiavellian scheme that had started out as fun and games, but soon took him to the point where he, and everyone he loved, would have lost everything if he hadn’t played ball.

Al Jazeera, of all places, was the only news network who followed up on the claim, and discovered a slew of CCTV footage and witnesses who had seen James commit other crimes before his big debut on the world stage. James wasn’t sure whether it was fortunate or not that wasn’t deemed newsworthy for the other outlets to cover, and it was never mentioned at his trial. His barrister shut him up as soon as he attempted to offer evidence of further crimes that could only add to the inevitable sentence. Whoever it was that was behind this, James told the jury, had burrowed their way into his life. The forces manipulating him were expert puppeteers, a spin doctor of criminal intent and action. Convincing him at first that he was doing the right thing, and bit by bit, step by step, took him further and further over the edge. James knew how that sounded, that he was just supporting the insanity plea, but there wasn’t any other way to put it. The mysterious Tweeter had been moving all the pieces in his life to reach their endgame.

But, James reasoned, he wasn’t their endgame. A hostage crisis and a little bit of stabbing was hardly worth all the effort they had put in. They had grander plans, and although he was likely no longer a part of them, discarded into the legal (and soon no doubt, prison) system, he didn’t care where his future lay.

All he had left to look forward to was finding out what small part he had played in the larger plan, wherever it might inevitably end.