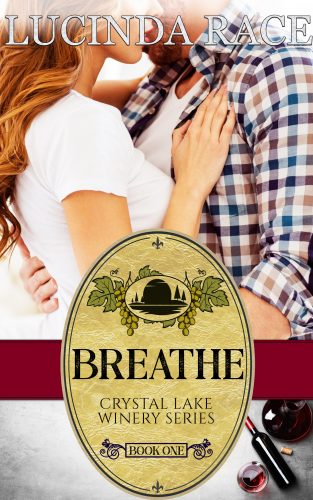 Romance and fine wine both need time to breathe…

Her family’s successful winery business in the Finger Lakes region of New York should have gone to Tessa Price. She’d always dreamed of running the winery, but when the “prodigal son” returns to take up the reins, she boldly strikes out on her own, purchasing Sand Creek Winery—a cash-strapped competitor—right out from under her family. She can forge her own destiny, using her marketing skills and big plans to bring new life to the winery. But first she has a proposition for the sexy previous owner. And he’s likely to hate it.

Kevin “Max” Maxwell would never have willingly sold his winery to anyone named “Price.” Family always comes first, and if paying for his sister’s cancer treatment cost him his business, it was worth it. But when the new owner offers him a one year contract to stay on as general manager, with a possible bonus, he really can’t afford to turn it down. He can ignore the effect her deep brown eyes and heart-shaped face have on his senses for a year, can’t he?

Relationships, like slowly ripening vineyards, take time. But Max has been keeping a secret from Tessa, one that could destroy her hopes for their future. Will a terrible accident force Tessa and Max to face how much they have to lose, or tear apart their budding relationship forever? Sometimes a romance is like a fine wine. To be its best, it just needs time to breathe.

What Inspired You to Write Your Book?
I wrote the Loudon Series and the Price family were very minor characters and were begging to have their stories told too. I also spent time working in a family run winery with all the dynamics at play. It was a natural fit.

How Did You Come up With Your Characters?
Don Price, the oldest son was a main character in Ready to Soar. When his father had a heart attack and pressured him to move back to Crescent Lake and run the family business it created a ripple effect for his sisters and brothers. I wanted Don to come from a large family and they just took shape very quickly in Ready to Soar.

Book Sample
The moment Tessa opened the heavy wood and glass door, her eyes were drawn to the tall, open stairwell. Kevin Maxwell leaned against the steel and glass banister, watching her.
He greeted her with a flat smile. “Good morning, Ms. Price. Welcome to Sand Creek Winery.”
The glass door closed behind her with a small whoosh. She squared her shoulders and walked into her winery. “Please call me Tessa.”
He gave her a half nod. “Tessa.”
“I’m glad you’re here. I wanted to talk with you.”
“I’ve been clearing out my”—he gave a slow shake of his head—“your office. I won’t be long.”
She ascended the stairwell. “Wait.”
Kevin’s cool blue eyes met hers. He was dressed casually in a crisp, cream-colored shirt, the cuffs rolled back, which highlighted strong hands and muscled forearms. He had high cheekbones, a long, thin nose, and was more handsome up close. She guessed he was around her age.
“I’d like to start our relationship on the right foot.”
His eyes never left hers. Challenging her.
She had been right that he wasn’t thrilled to see her. She had negotiated the purchase through a broker since she suspected he wouldn’t sell to a Price, no matter how much money was involved. She’d made a fair offer and he’d accepted it.
She pointed to an open door. “After you.”
He did a one-eighty and strode through the doorway.
The large room was dominated by a long maple conference table and several leather chairs. In front of her was a wall of windows that looked out over acre after acre of vines. Pride surged in her. It already felt like she belonged. Several boxes were strewn about, in various stages of being packed. Not seeing a desk, she set her black leather briefcase on the table and walked to the windows.
“Quite the view.” Kevin had come to stand next to her. He was so close, she could feel the waves of indifference radiating off him.
Without looking at him, she said, “It looks completely different from this perspective. The virtual tour didn’t do it justice.”
“When I built this building, my intent was to be able to look out and witness nature as it nurtures the vines. Watching the vineyard throughout the seasons gives me hope for the future. There’s nothing like it.” He turned away as if he couldn’t bear to look any longer.
“Impressive.” She was reminded of the view in Don’s office. It was strikingly similar. She turned from the window and gestured to the chairs at the table. “Please, can we talk?”
He dropped to a wooden stool, leaving the executive chair noticeably empty.
Unsure where to start, she said, “You can trust me with Sand Creek Winery.” She empathized with how it must feel, forced to sell his business.
When she sat down, he gave her a curious look. “It was either accept the blind offer or let the bank take it. I’ll admit if I had known it was a Price, I might have reconsidered.”
She cocked her head to the side and let that comment slide. “I have a proposition for you.” She wanted to rephrase that, but it was already out there.
His eyebrow rose and his chin dropped a fraction of an inch. “I’m listening.”
“I would like for you to stay on as the general manager.”
She could have heard a pin drop.
“And why would I want to do that?”
She leaned forward and clasped her hands, resting them on the polished wooden surface. “You’re a good winemaker. I suspect a good marketing campaign can change sales. I happen to excel in sales and marketing.”
“You think very highly of yourself.”
She thought she saw a glimmer of humor in his crystal-blue eyes. “You know how to manage the field workers. You have a couple of excellent wines, but I want to hire an enologist to work with you, someone who is interested in growing this business.”
Kevin leaned back in the chair and crossed his arms over his chest. “What’s in it for me besides a paycheck?”
She suspected she had captured his interest. “If after the first year we exceed our profit by twenty percent, I will give you an additional bonus.” She held up a hand before he could speak. “That would be in addition to the profit-sharing plan I’ll be rolling out to all full-time employees.”
He gave a snort. “Your staff consists of Brad, who manages the warehouse and is laid off every winter; Mrs. Hanley, who works part time in the tasting room, and we bring on seasonal workers in the vineyard.”
“Maybe that’s it for now, but I’ll grow the staff as well.” She lifted her chin. “I plan to turn this winery around and make this region take notice.”
His eyebrow cocked. “You’re rather bold. Do you have a concrete plan to back up your words?”