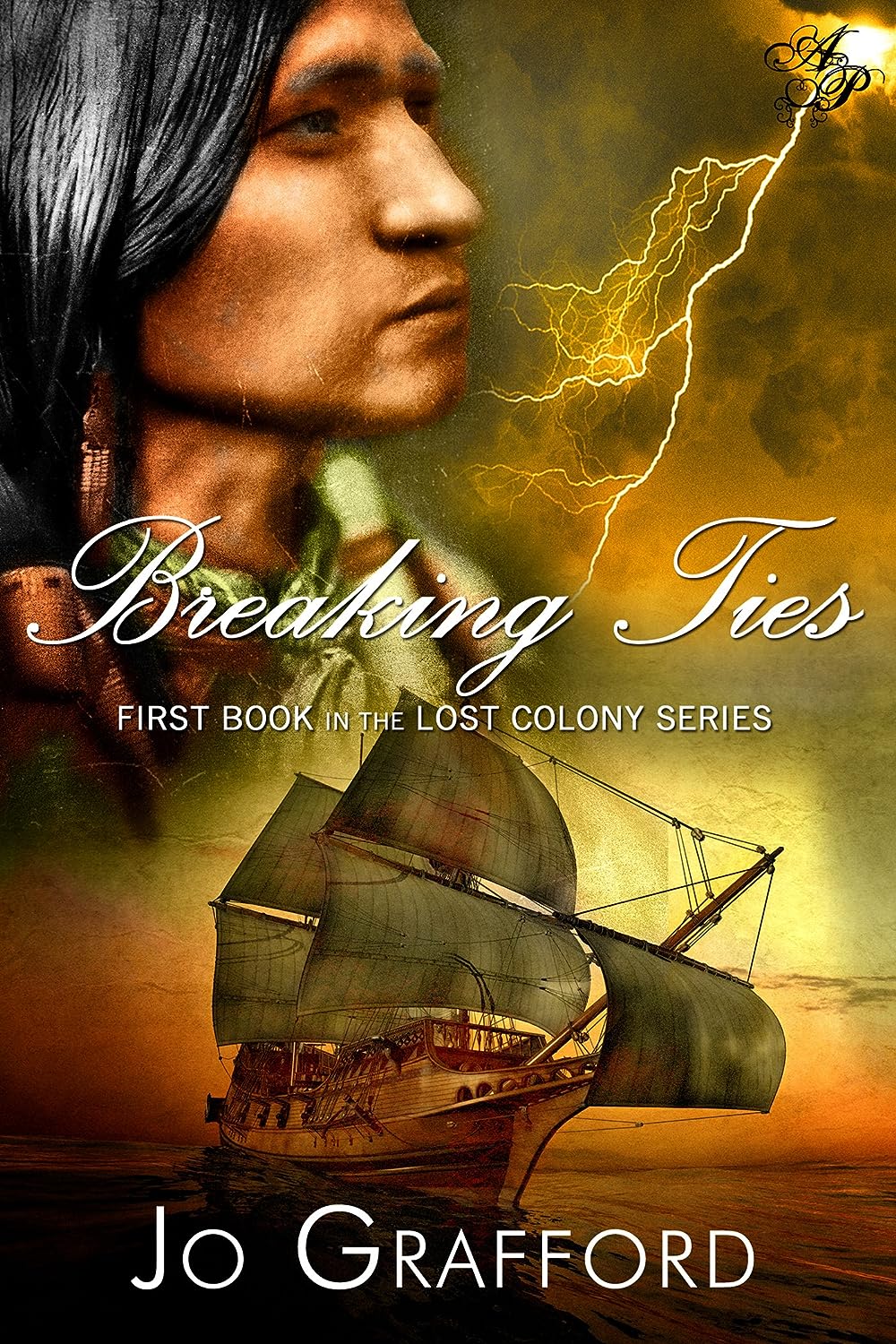 A career woman ahead of her times, ROSE PAYNE’S world is shattered after a secret betrothal to the duke’s son costs her job as a clerk in his father’s household. Without a letter of recommendation, she becomes an easy target for recruiters to the Colonies. Desperate for work, she signs up for a risky overseas venture and sails for the New World, vowing never again fall for a wealthy gentleman.

Returning from a diplomatic tour in London, CHIEF MANTEO is bewitched by the elusive, fiery-haired ship clerk and determined to overcome her distrust. He contrives a daring plan to win her heart – a plan he prays will protect her from a chilling conspiracy involving murder, blood money, and a betrayal of their fledgling colony so terrifying it can only be revealed in BREAKING TIES.

BREAKING TIES is the never-before-told rest of the story of the Lost Colonists of Roanoke Island.

What Inspired You to Write Your Book?
To draw attention to one of the world’s most intriguing unsolved mysteries and give long overdue credit to a group of unsung heroes.

How Did You Come up With Your Characters?
BREAKING TIES is based on real people and real events. The names were taken from the actual ship manifest for the Roanoke Island colonial venture.

Book Sample
“We are going to starve, Manteo. ‘Tis only a matter of days now.”

“Nay. You alone starve. The others eat.”

“I have no appetite.”

“You act as one already dead.”

I straightened my back. “I accept what I cannot change.”

“And I change what I cannot accept.” He shifted his weight to the wall, one arm propped over my head. He drew his fingertips down the side of my face in a feather-light caress.

I closed my eyes against the rush of unbearable sweetness. He made me long for things forbidden. “‘Tis within your power to help us. I am begging you.”

My eyes flew open. “Ye will do this for us.”

“For you.” His voice was silken, his features as hard as granite.

I smiled tremulously. “I thank thee, Manteo. Chief Manteo, that is.” The new title felt strange on my lips. I beheld him with a mixture of awe and pride.

“I have yet to name my price.”

He grunted in disgust. “You refuse me as both husband and lover, so you are left with the hiring of my services.”

I worried my lower lip between my teeth. At least he was willing to negotiate. His eyes flashed with lust as he followed my movements.

“I will entreat the Dares for payment.”

I raised and dropped my hands helplessly.

“You serve this company, no? You can serve my people, too.”

“Ye would hire me as clerk?” Hope leaped in my chest at the possibilities. I would not have to part from him so soon.

“My people have no clerks.” His eyes narrowed. “We have slaves.”

About the Author:
Jo is a mega reader of all genres and loves to indulge in marathon showings of Big Bang Theory, CSI, NCIS, and Castle. Her favorite books are full of rich history, strong alpha males, Native Americans, and creatures from the otherworld – an occasional dragon, vampire, or time traveler.

From St. Louis, Missouri, Jo moves a lot with her soldier husband. She has lived in the Midwest, the deep South, and now resides in Bavaria. Jo holds an M.B.A. and has served as a banker, college finance instructor, and high school business teacher. She is a member of Romance Writers of America, From the Heart Romance Writers RWA Chapter, and the Writers Group of Ansbach/Katterbach/Illesheim.