You are here: Home / Fiction / Brambleman by Jonathan Grant 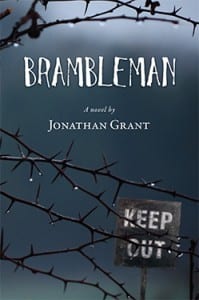 Down-and-out Atlanta writer Charlie Sherman has no idea what madness awaits him when a mysterious stranger convinces him to finish a dead man’s book about a horrific crime that’s gone unpunished for decades.

What Charlie inherits is an unwieldy manuscript about the mob-driven expulsion of more than 1,000 blacks from Forsyth County, Georgia in 1912. During the course of his work, Charlie uncovers a terrible secret involving a Forsyth County land grab. Due to its proximity to Atlanta, the stolen farm is now worth $20 million—and a sale is pending.

When he finds the land’s rightful owner, Charlie becomes convinced he’s been chosen by a Higher Power to wreak justice and vengeance on those who profit from evil.

And then things go horribly wrong.

Author Bio:
Brambleman author Jonathan Grant is an award-winning writer and editor (The Way It Was in the South: The Black Experience in Georgia). He publishes Georgia Colleges (www.georgiacollegesblog.com), a news website covering educational issues. He also runs a Darwin-awardish blog at www.chaingangelementary.com.

His new novel, Chain Gang Elementary (Thornbriar Press), tells the tragicomic story of a war between a reform-minded PTA president and an authoritarian principal. A Thousand Miles to Freedom, his screenplay based on the real-life adventures of escaped slaves William and Ellen Craft, was recently optioned to a Hollywood producer.

Grant grew up on a Midwestern farm and graduated from the University of Georgia with a degree in English. He is a former newspaper journalist and served for several years as a Georgia state government spokesman. He lives in suburban Atlanta with his wife and two children. Actively involved in community affairs, he has been a PTA president at a five-star School of Excellence, an elected member of his local school council, and a soccer coach for twelve seasons.