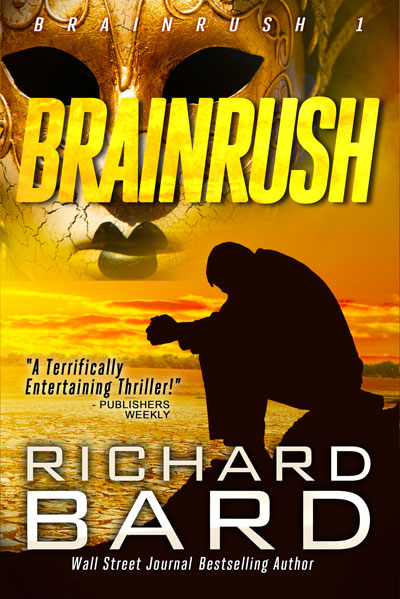 The sensational Wall Street Journal #1 Bestseller that Publishers Weekly called “A Terrifically Entertaining Thriller” is finally FREE!
When a freak accident endows a terminally ill man with extraordinary mental abilities, he’ll spend his last days fighting to rescue a woman and her autistic child, unwittingly becoming the only hope against a global terrorist—or the fanatic’s ultimate weapon.

What Inspired You to Write Your Book?
BRAINRUSH is a story about second chances and embracing each day of your life as though it's your last. It was a natural first step in my writing since the protagonist’s emotional journey—as an ex-Air Force pilot who faced a terminal diagnosis—parallels my own.
As part of a military family I traveled all over the world. I experienced more than my share of tearful good-byes as my family hopped from country to country, state to state. It seemed like every time I got settled in to a new home—sometimes even a new language—Dad got transferred. I learned to make new friends easily enough, but it was movies and books that ultimately became my constant companions. I can still remember ditching second session of Saturday catechism on base in Wiesbaden, Germany, so that my brother and I could sneak into the matinee. (Popcorn was only twenty-five cents!) I read my first 'chapter' book when I was six-years-old. It was Fulton Oursler's 1949 novel The Greatest Story Ever Told. I can still remember my wonder and excitement as the story took me away. It’s still on my shelf. I've consumed books ever since, always fiction, always action/adventures and/or thrillers. And to this day I still go to the movies at least twice a week. Fifty years of films and books have fueled an active imagination filled with stories crying to escape. When I exited the business world a few years back, I decided it was time to open the floodgates. With the help of a bunch of classes and terrific instructors at UCLA-extension Writer’s Program, I started writing. And writing. And writing. I couldn’t get enough of it. (Still can’t!) There’ve only been two ‘jobs’ that I’ve had in my career that I really loved. The first was flying; the second is writing. I couldn’t be happier.

How Did You Come up With Your Characters?
I like to weave every-day characters into my stories, the kind of people we might see at the grocery store, or the library, or work or school. These are people we can all identify with. But it's what's hidden beneath the layers of "normal" that I strive to bring out from each of these ordinary characters–by placing them in extraordinary, life threatening situations. That's when a person's true character is revealed, and then that the story comes to life.

For joining the author’s email/newsletter list you will get:
Gifted, a Brainrush Novella