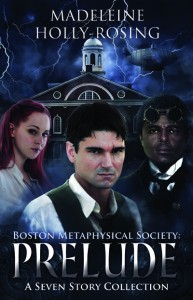 Imagine an alternate steampunk history where ghosts and demons are a normal part of life. Families known as the Great Houses control the economy of the Great States of America and the middle class and the lower class Irish sole purpose is to not only to serve them, but to rid their lives of supernatural beings.

Discover the life of Medium and Spirit Photographer, Andrew O’Sullivan, before he went to work for ex-Pinkerton detective, Samuel Hunter in “The Devil Within.” Search for demons (human and otherwise) alongside Granville Woods in “The Demons of Liberty Row.” And learn why Caitlin O’Sullivan must hide who she is from those closest to her in “The Secret of Kage House.”

Compiled together for the first time are seven stories based on the popular comic Boston Metaphysical Society. The collection also includes “Steampunk Rat” and “The Secret” in addition to the short stories,” The Clockwork Man” (published in eSteampunk Magazine) and “The Way Home” (previously published in the A1/Atomic Press Anthology). All stories are prequels to the comic and do not contain any spoilers.

What Inspired You to Write Your Book?
I wanted to pull together all the short stories and novellas I had written in the Boston Metaphysical Society universe into one volume: print and digital. It also allowed me to introduce new characters and delve more deeply into ancillary characters from the comic.

How Did You Come up With Your Characters?
Each character was originally developed as part of a TV pilot I wrote while I was at UCLA Film school. It was then suggested that I adapt it into a comic book series, which I have. (It’s a sis issue mini-series.) While that was in production, I wrote the novellas and short stories that would be prequels to the comic.

Based on the webcomic BOSTON METAPHYSICAL SOCIETY, this story takes place during the time of the House Wars, thirty-five years prior to the start of the comic.

Lucius Garrett knew he was dead when he woke up.

He knew because he had watched the steel rod fly through the air and plunge into his chest after the explosion. His breath had left his body as he was thrown backwards and crashed into a row of airship rigging. Now, he was awake, breathing, and very much afraid. The rumors were clearly true. His would have been a mortal wound had he not worked for Houses Hibbard and Tillinghast of Chicago.

Lucius woke up in a room the likes of which he had never seen. Steel-and-brass human legs and arms hung on one wall, while the other was a wooden shelf shaped like a beehive filled with various sizes of gears and springs instead of honey. A tube made of cattle intestines was imbedded into his arm, forcing a pale liquid into him by way of a steam-powered generator. A kind but rather strange man named Dr. Casselberry removed the tube as he told Lucius what an extraordinary man Lucius was and then showed him why he was still alive.

His heart had been crushed, so Dr. Casselberry had replaced it with a clockwork mechanism that ran on a metal spiral coil inside a clock barrel large enough to operate a medium-sized timepiece. His heart valves were stitched closed with the same rubberized cotton material used to create the hydrogen gas cells at the factory. A flap of that same material was glued to the surrounding skin on his chest to protect his heart. And there was something else.

A small device imbedded within the clockworks would explode when the mainspring ran down.