You are here: Home / Fiction / Fantasy / Birth of the Anima: Ancient Language of the Earth by Kelsey K. Sather 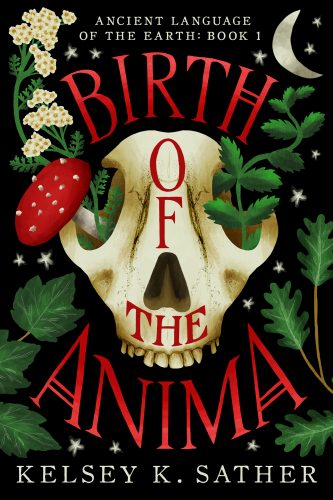 Over millennia, across the seven seterras of Aligaea, twelve women—the Anima—develop powers akin to apex predators. Along with their bestial strength and speed, they inherit the Task to restore ecological Order to the world. Yet fulfilling the Task seems improbable as the Imperium spreads a plague of ecocide and despotism across the land, ushering in the apocalypse with its infectious Disorder.

Stout and smart Freda Johansson leaves behind a promising career, love, and community to seek the red-capped mushroom capable of turning her into the final Anima. Whether its plant magic or free will guiding her from emerald forests to austere peaks, she doesn’t care. She only needs to find the mushroom before the Imperial Forces can seal the catastrophic fate of the planet. The sacred balance of Life depends on the birth of the Anima—but even then, she must choose to embrace her powers as both woman and wild beast.

Booklist says, “The world set up by Sather is carried by her lyrical writing, the ingrained wonder in the natural world, and her striking authorial ambition.” In Birth of the Anima, Book One in her Ancient Language of the Earth trilogy, Sather deftly combines themes of sustainability, environmental justice, and feminism with nuance and creativity, infusing the entire journey with high-stakes magic and thrills.

What Inspired You to Write Your Book?
The idea for the Ancient Language of the Earth trilogy began as a question. I was pursuing a Master’s in Environmental Humanities, and my course work involved a lot of depressing research about the ecological crisis we find ourselves in. I often wondered how, and why, humans became disconnected from the natural world that sustains us. One night, I wrote in my journal, what would it feel like to live fully, truly, as a human animal? The concept of the Anima grew from there.

How Did You Come up With Your Characters?
As many fiction authors will attest to, the process of creating characters is mysterious and organic. My characters reveal themselves to me at their leisure, and I’ll spend hours free-writing in an effort to get to know them better. It’s not unlike a relationship with a new friend: it takes time to understand a person, and even then, the person will continue to surprise us decades later. I connect most with Elle and Freda, as I’ve spent the most time with them. Elle is like a beloved little sister to me, while I consider Freda an inner mentor.

Book Sample
Her master interpreted the stars and wrote his constructs in the foreigners’ language. Though he had been born an Alidiman, the Yiúsians had acknowledged his gifts and afforded him prestige. Prestige—not freedom. No Alidiman, Avni figured, would ever live free again. Master Saket pretended to be free like a lord. He barked orders at Avni and her older brother, demanding more wine, more ink. When she would set food and drink on his desk, she hovered as long as he allowed, trying to read what he wrote. Though she understood Yiúsian words aloud, the pitch scratches upon the vellum appeared as meaningful as lines left in dirt by ants.

Back when he had been simply Saket, he would share his interpretations with the village every full moon. If one knew within what moon she had been born, she could hear, through Saket, what the stars said about her future. Avni had never been such a person. She knew not what day her life had begun.

She ground burned bones for his ink. Thesmell of rock against charred fragments of ribs and vertebrae reminded Avni of the mine in the mountain. She wondered if her dad still swung his axe, or if he, too, had died in last week’s collapse. Not that it mattered. She had grieved the death of her father a hundred times over. In any way it mattered, she lived as a parentless child, neither daughter nor girl. Only slave.

Links to Purchase eBooks – Click links for book samples and reviews
Buy Birth of the Anima: Ancient Language of the Earth On Amazon