You are here: Home / Fiction / Romance / Beyond the Ivory Tower by Jill Blake 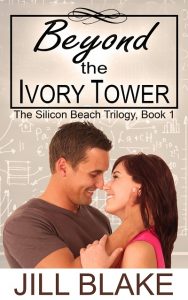 If there’s one thing math professor Anna Lazarev believes in, it’s the value of higher education. So when her younger sister announces she’s dropping out of college, Anna places the blame squarely on the man who inspired her sister’s rebellion.
Venture capitalist Ethan Talbot claims the US academic system is broken. His solution? Pay top students to “opt out” and pursue their entrepreneurial dreams without wasting time and money on a university degree.
In a passionate battle for the hearts and minds of a new generation, Anna will do whatever it takes to prove Ethan wrong. But when his demands take a more personal turn, will she sacrifice her principles to come out on top?

What Inspired You to Write Your Book?
Writing fiction is a bit like dreaming: random impressions drawn from real life come together in new and often startling ways.

About a year before I started writing Beyond the Ivory Tower, I read about one of the original "PayPal mafia" members, Peter Thiel. A successful entrepreneur, venture capitalist, and philanthropist, Mr. Thiel is also a very vocal critic of the American "one size fits all" education system. Through his Thiel Fellowship program, he encourages bright entrepreneurial students to drop out of school to pursue their entrepreneurial dreams without the constraints imposed by a traditional university education.

When I mentioned the article to my husband, who is a professor of computer science, he scoffed. He is a big believer in education—the more, the better.

The inherent conflict between these two opposing points of view struck me as something that would make a great story. And because I write contemporary romance, that story of course had to have a happy ending.

The result? Beyond the Ivory Tower. It pits math professor Anna Lazarev against venture capitalist Ethan Talbot. They clash over Anna's sister, who drops out of school in order to participate in a program that Ethan funds. In the process, Anna and Ethan fall in love.

How does that happen and what comes of it? Read their story in Beyond the Ivory Tower and find out.

How Did You Come up With Your Characters?
Most of my writing is character-driven. However, with Beyond the Ivory Tower, I started with the plot first: a conflict over what constitutes the best approach to higher education. Anna and Ethan grew out of this conflict, each representing an opposing point of view. They took on a life of their own as soon as they met, growing with each subsequent encounter. A big thanks goes to my husband for his help in shaping the career path and speech patterns of my heroine, Anna–who, like my husband, is a math professor.

Anna groaned and rolled over, fumbling for the receiver.

She winced and shut her eyes against the shards of sun coming through the open blinds. Her temples throbbed, and her mouth felt as parched as a dried-out river bed.

There was a beat of silence, and then Becca’s cautious voice, “Are you alone?”

She risked another glance around the room before closing her eyes again. “Yes.”

“You weren’t answering your cell,” Becca said. “The front desk put me through to your room. Are you all right?”

That was debatable. On a humiliation scale of one to ten, where would she rank getting drunk and throwing herself at a man who looked like the “after” shot in a workout ad?

At least she still had her clothes on. She popped one eye open to double-check. Yep. The dress was a little wrinkled, but definitely intact.

She wondered what Ethan was doing this morning. Probably thanking his lucky stars for his narrow escape. Vague memories of the night before made her cringe. Good thing she was heading back to L.A. today. She didn’t think she could face him in the sober light of day.

Which reminded her of what she’d nearly forgotten: there was a reason she didn’t date. As her sister would say, she sucked at it. Big-time.

That was the trouble with best friends: they could tell when you were lying. And they weren’t shy about sticking their noses into your business.

A hot shower, two cups of coffee, and three ibuprofen later, she felt slightly more human and in control.

“You did what?” Becca shrieked, after hearing an abbreviated version of yesterday’s debacle.

“Just a little louder, Bec. I don’t think the citizens of Kansas heard you.”

“Wow. Ethan Talbot. I can’t believe I had to drag it out of you.”

Anna switched to speaker phone and lifted her suitcase atop the bed. “It’s not like I planned it,” she said, gathering discarded items of clothing and tucking them into a laundry bag. “It just happened.”

“I didn’t exactly end the dry spell.” She shoved the shoes into a different bag. “He dropped me back at the hotel and left. End of story.”

“Well, don’t keep me in suspense. When are you seeing him again?”

“I’m not.” She debated dumping the unused box of condoms. It wasn’t as if she’d need them any time soon.

Then again….She glanced at the expiration date. Two years. A lot could happen in two years.

“Why not?” Becca prodded.

“Because I’m heading home.” What the hell. She tossed the condoms in her suitcase. “Besides, we have nothing in common. And he refused to release Klara from the Fellowship.”

“Anna, sweetie, sorry for pointing out the obvious, but most people view the Talbot Fellowship as something prestigious.”

“It’s not a degree, Bec. It’s not even a certificate.”

“Maybe not, but it’ll still look good on Klara’s CV.”

Anna ducked into the bathroom for her toiletry bag.

Becca’s voice followed her. “You know Klara will do what she wants, regardless of what you say. Which means you’ve got two choices: prolong the battle and risk alienating her completely, or accept what she’s doing and move on.”

“It wouldn’t kill you to be a little more flexible. Klara’s the only family you have. Shame to lose her over something that’s going to be over in two years.”

“Does the word hyperbole mean anything to you?”

Anna ignored her attempt at humor. “If Klara doesn’t finish her education, she’ll end up regretting it. Maybe not now, but someday.” She glanced around to see if there was anything left to pack.

“She can always go back to school,” Becca said. “There are plenty of returning students of all ages.”

“And look on the bright side. Now that Klara’s moved out, you have the whole place to yourself. You can finally have a social life.”

“Is that supposed to cheer me up?” Anna said, zipping the suitcase.

“It’s all in the attitude. Now tell me more about Ethan Talbot.”

“Nothing more to tell.”

“Come on, you have to do better than that.”

“Seriously, Bec. I’m lucky if the guy doesn’t turn around and walk the other way the moment he sees me.”

“I threw myself at him.”

Anna winced and lowered the cell phone volume. “I may have had a little too much to drink.” She waited for Becca’s laughter to taper off. “It’s not that funny.”

“Sorry. I’m just trying to picture it. I don’t think I’ve ever seen you drunk.”

“Yeah, well don’t hold your breath.” Anna lifted the suitcase off the bed. “I have to go check out.”

Two hours later, her phone buzzed. She ignored it. Another hour passed before she pulled into a rest stop to use the facilities and check messages.

She read Ethan’s text while standing in line for coffee.

*How are you feeling?*

Oh, boy. Mortified would just about cover it. Hung over would work too. And determined to put the entire unfortunate interlude with Ethan behind her.

She dropped the phone back in her bag and stepped up to the counter.

Two and a half hours later, as she unlocked the front door of her Santa Monica apartment, another text came through:

Clearly, the man wasn’t going to let it go until she responded.

She dumped her belongings in the living room and typed:

His response was immediate:

*Didn’t get chance to say goodbye.*

She sank down on the couch.

And that should have been the end of it. Except for some reason, Ethan seemed determined to go off script.

Was he asking because he wanted to see her again, or because he wanted advance notice so he could avoid running into her? She wouldn’t blame him if it was the latter. She’d never made such a fool of herself before. The only thing that would have been worse was if he’d taken her up on her offer, and then she’d vomited all over him. Or passed out in the middle of things. Or woken up naked and alone and not remembering a damn thing about how she got that way.

Considering all the worst case scenarios that hadn’t happened, she supposed she should be grateful. But that didn’t mean she wanted to see Ethan again. Ignoring the little voice in her head that said liar, liar, she texted back:

*Busy with work. Have to stay in LA.*

Then she shut off her phone and headed for the bedroom. She squelched any residual guilt by reminding herself that they had nothing in common. If he tried texting or calling her again, she’d simply ignore him. The same way he’d ignored her emails and phone calls when she’d first attempted to contact him.

Of course he hadn’t known her then. He probably got a ton of spam and solicitations, and her messages might have gotten lost in the shuffle—assuming they ever reached him at all. Now that they’d met, the dynamics had changed.

But that was beside the point. She didn’t belong in his world, and he had no place in hers. Best to cut her losses before anyone got hurt. And by anyone, she meant herself. Because she really couldn’t imagine a man like Ethan Talbot getting too hung up on a woman whose IQ far exceeded her bra size.

She toed off her sensible flats, stripped off her clothes, and climbed into the shower. Time to get back to real life.

Buy Beyond the Ivory Tower On Amazon