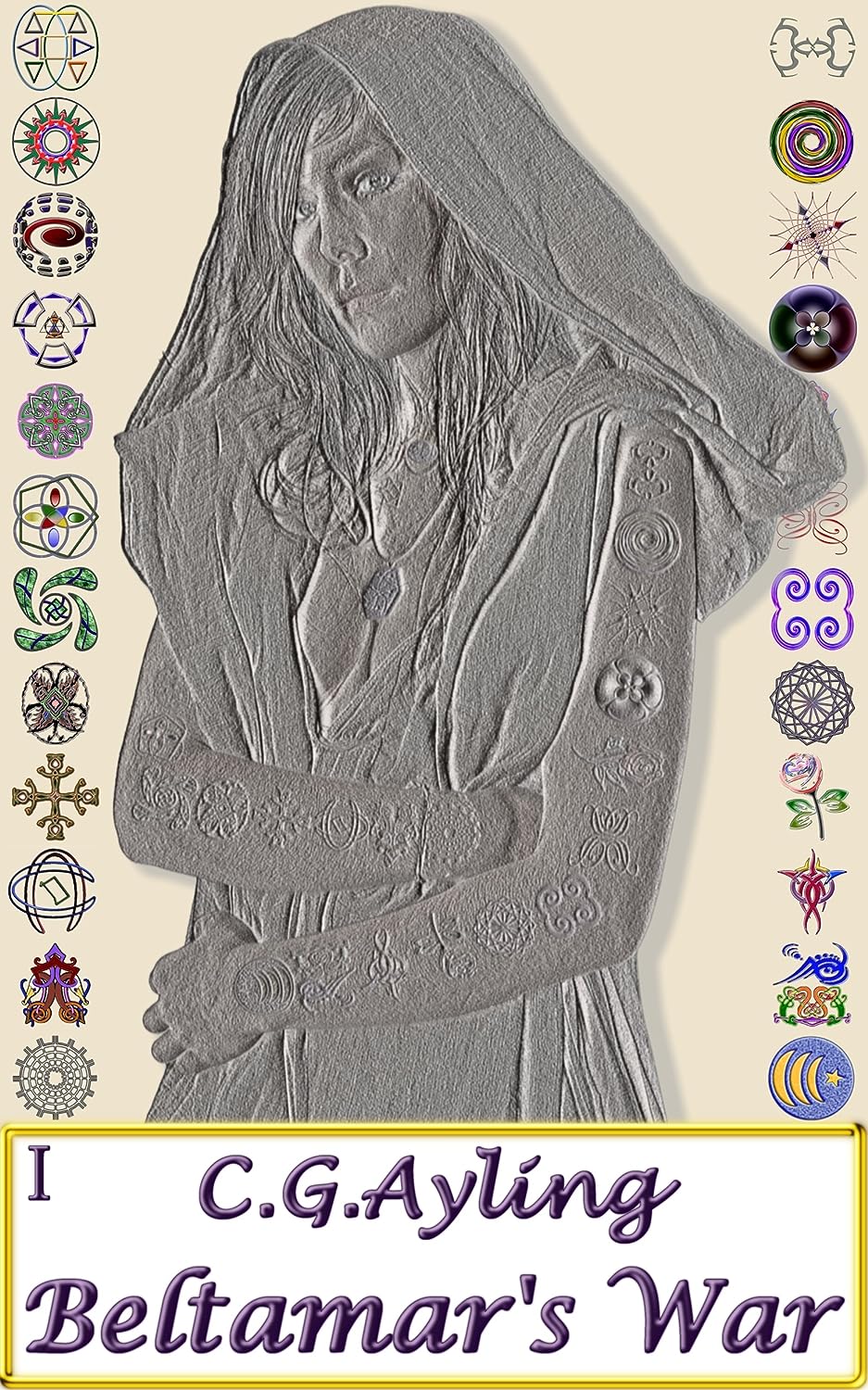 Beltamar’s War is the first book in Malmaxa, an epic fantasy series. Malmaxa is a complex work of philosophy and metaphor, couched in a fully formed fantasy world. Though Malmaxa has been favorably compared to both The Lord of the Rings and The Wheel of Time, I believe it differs substantially from these epic works. Malmaxa is more concerned with character than with place, with motive than with deed, with justice than with creed. Although Malmaxa poses questions, it does not propose answers. Your answers reside in your heart, where you only need seek them. While Malmaxa is not poetry, the following piece of free-form verse concisely illustrates some of questions and concepts raised in my literal, lyrical world.

How would a just world be?
No rich, and no poor.
No government, and no governed.
No served, and no servants.
No clergy, and no lay.
No owner, and no slave.
No one able to force you to their way.
No one to prevent you having your say.
In two words, no disparity.
~
A just world might seem harsh.
Death would be an end, and a new start.
Cherished symbols, would be etched in flesh.
There would be war, with no victory.
Neither peon, nor royalty.
Wealth, with no poverty.
Farmers, but no famished.
~
A just world is a world where
loving family are all around.
Where to be free, we must be bound.
Where children are safe to play.
Where people may move, or choose to stay.
Where cruelty exists, but is held at bay.
Where none are forced away.
Where character is held in high esteem.
Where we all must fulfill our dream.
Where while lineage means everything, it means nothing too.
Where we must be who we are, not who our parents were.
Where coins are bartered, they are not spent.
Where prophetic dreams, from the Gods are sent.
~

What Inspired You to Write Your Book?
Realization we live in a world where the meaning of life has been lost.
We are all so busy we don’t have time for the things that really matter, things like family, love, soul, spirit, and emotional happiness.

We’ve been misled into believing that money is all that matters, when in reality money doesn’t by a single thing that actually matters at all. We can’t by life, and we can’t buy love. Yes we can buy things, but things don’t love us back.

How Did You Come up With Your Characters?
They are people we’ve all met, some we’ve loved and some we’ve loathed. But they have one thing in common, we’ll never forget any of them.

My characters are based on people who mean something to me, real people substantially modified by imagination.

Book Sample
The following excerpt is taken from Chapter 11, Section 3. It is titled “Victory’s Retreat.”

The groth’s razor tipped claws gouged for purchase on the hardened scale shields as it darted over the phalanx. Somehow, it avoided all spear thrusts and with a final bound and a hissing yowl of victory leapt down. It landed directly in front of Faroene, facing the Artisans. Completely unaware of her, it immediately advanced toward them, slowly and carefully as it anticipated its allies’ arrival.

In hope of distracting it from the Artisans, who would be easy prey for any groth, Faroene struck the beast a brutal blow with her shield. The groth spun to face her, instantly on the attack. Razor sharp fangs snapping, claws scratching, it focused its full attention on her.

Faroene caught Ripkira’s command to retreat and dashed past the beast’s left side to ensure her shield remained between them.
Intent on Faroene’s destruction, the groth pivoted to follow her.

Faroene’s heart and throat clenched tight in shock at the cry, “Beltamar falls!” Thoroughly distracted by this terrible news, she moved backwards as the retreat progressed. Sorely distressed and badly shaken, her body functioned without need conscious thought. Though hard pressed to hold off the groth’s constant assaults and in no mental condition for combat, she managed to hold her shield low to the ground and arrest the groth’s every attack, albeit barely.

With each thwarted thrust, the groth grew more incensed.

At an eerie wail, the rest of the pack turned tail and fled. Only this lone groth had traversed the phalanx alive. It perceived its masters’ horn blown summons and instantly pivoted to obey, only to find itself trapped behind the phalanx. With a vicious hiss, it spun about, fixed its amber eyes on Faroene, and resumed the attack.
Still no word of Beltamar…

Each pulsing, fiery surge of her fully ignited Chukrah infused Faroene with energy, power, and battle expertise. Her body hummed, every nerve alive, every sense heightened. The world and everything within it slowed as she embraced Fury and switched from defensive retreat into luring attack. A disembodied thought came, Hounds are no match for groth, foolish to call groth hounds. She voiced aloud an immediate reply to the silent thought, “But I am no hound, groth!”
As Faroene took another step back, she felt her right foot strike a boulder.

A normal person would have tripped and crashed to the ground.

Faroene was no normal person.

She was a Warrior, Chukrah matched and infused with Chukrah-power.

Instantly, her foot’s motion switched from backward to upward.

She felt the brush of the rock through her boot heel as clearly as if barefoot. As her heel cleared the boulder’s top, three hands high, she switched her foot’s motion to a smooth, backward sweep. The boulder’s coarse surface caressed her sole. Its resistance to her heel told her it was solidly embedded. Her heel informed her when her foot cleared the boulder, and her sole told when her foot hovered over it.

Faroene changed her leg’s motion to a powerful downward thrust and rose, lifting as easily as if walking backwards up a smooth incline. As her body elevated, she raised her shield and extended her sword wide as a counterweight. Her right leg supported her entire weight as she balanced atop the boulder.

Where a moment before her shield was less than a hand off the ground, she now held it high. As she used it for balance her outstretched sword no longer targeted the groth but pointed aside.

The groth needed no more opportunity than this and immediately surged forward beneath Faroene’s shield. Its serpentine-hinged jaws opened wider than any hounds could to expose needle tipped fangs.
Faroene struck.

Her body lifted into the air as she reversed the upward momentum of her shield to bring it down on the creature. The copper bound shield edge crashed into the groth’s back, just behind its neck. This slowed the beast’s forward momentum. Melded to arm, her sword slashed to her left. With a decapitation kill impossible due to her shield’s position, she did not attempt such but simply let the blade choose its own path.

Her sword, an extension of her arm, struck as high as was feasible and neatly severed the beast’s front legs just below its shoulders. Razor edge unimpeded, the blade flowed onward in a smooth arc. Her shield still driving downward, slammed the groth’s legless torso into the ground.

Even with its front legs lost the groth remained a formidable opponent, and far from dead. Though unable to roll its eyes sufficiently to see its tormenter, it twisted its head left and fixed her with a single amber eye.
Filled with malice was its gaze.

Jaws spreading wide, rear claws digging for traction, it began another lunge, intent on striking again.
Faroene looked at the groth. Her battle heightened senses noted the slit-pupil within its amber iris, its forked tongue, its razor sharp fangs, and the heavy scales adorning its shoulders.

Almost casually, Faroene leant her full weight on her shield and held the frantic groth fast to the earth. Her sword reached completion of its forward swing. With a powerful twist of her wrist, she aimed its tip at the monstrosity’s neck, released the weapon, and grasped it overhand. Now reversing her arm’s motion, she stabbed downward through the groth’s neck, and drove her sword on, deep into the earth.

Her blade now held the beast.

The groth lay immovable on the ground, doubly pinned by shield and sword.

Filled to bursting with a choking mix of rage and despair, Faroene’s mind gradually cleared. With every sense sharpened, she missed nothing. She felt her heart contract, felt her heated blood surge through her vessels, felt sweat trickle on her brow, felt her eyelid’s droop in a blink.

Eternity passed in that motion.

Memories of joy. Anticipation of pain.

Unbearable love and its loss.

Filled with unutterable torment, Faroene stood a moment longer. A mute statue balanced upon a boulder, frozen in place by Anguish’s chill breath.

Beltamar’s loss settled on Faroene’s soul and clasped her spirit within its cold embrace.

No other outlet for her torment than her scream.

With a brutal twist, Faroene wrenched her sword free of the groth.

Heart’s blood fountained into the air, bright in the falling sun’s orange glow.

With a last, convulsive snap of its jaws, the reptilian hound sagged to the ground.

Faroene held it with her shield as she watched life fade from its eyes.

Its death brought no relief.

Tears welled in her eyes, their mist obscuring her vision. Her body quivered, knees suddenly weak as her Chukrah released her.

Author Bio:
First, C.G. Ayling is my pseudonym. My Godfather and the man who first name I share, Charles Gilbert Ayling, was a man and a truly wonderful person. I am also a real person. Though I happen to be male, I hesitate to deem myself a “real man” since that is a topic in its own right. Who I strive to be, as opposed to the given name I received, is reflected in my writings. To me, my words are far more important than my name. I hope that once you’ve read me, you’ll know me as well as I know myself.