You are here: Home / Fiction / Mystery/Suspense / Below The Strandline by Tim Parr 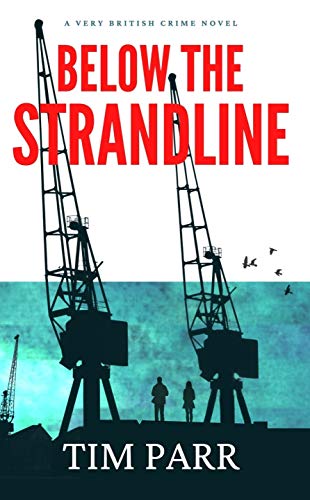 A body is washed up on a riverbank on the falling tide, its hands hacked off. Enter the murky world of survival and greed that flourishes Below The Strandline. Plunge into this very British crime novel, brimming with murder, intrigue and characters to love or to loathe.

Haunted by a dark past, misfit Jerry runs away to the city. There he meets Scarlet, a kindred spirit who becomes his partner in crime. Meanwhile, a powerful secret society led by former spymaster, Sir Peter, closes ranks against a disloyal member. When a woman is found fighting for her life after a suspicious fall, detective Jack Drummond’s investigation uncovers a brutal gang controlled by a mysterious paymaster. Will they stop him before it’s too late? The plots intertwine as Jerry seeks to confront his nemesis in an action-packed finale.

What Inspired You to Write Your Book?
I was a child of the sixties, grew up in the seventies and later spent my student years in London. The city had a gritty edge to it. I have also been intrigued by the stark contrasts found in many cities but particularly in London. Prosperity and poverty are uncomfortably close neighbours. I would see a street of gentrified mews houses with geranium-filled window boxes, but turn a corner and there were people fighting for survival, sleeping rough, trading on street corners. I have always kept observational notes in dog-eared notebooks and sketched out plot lines on the backs of crumpled envelopes, all shoved at the back of my sock drawers. A quest for socks with no holes in them led to the discovery of my notes and in turn I found the raw ingredients and inspiration for my debut crime novel.

How Did You Come up With Your Characters?
Every person in my book is fictional but in a way they are also very real to me, a composite of people I have met or closely observed. I wanted a main character to have complexities and build their human story, leaving open the opportunity for romance. My characters felt real on the page as I penned them, with a nod to eccentric people that I have come across or imagined, drawn from different social backgrounds and generations to create a cocktail, lightly stirred. There are decent folk in my book and those more willing to bend the law. I have had great fun putting the upstanding and the devious through the mill. I have grown quite fond of some of the characters. Above it all, this is crime fiction and I for one love some old fashioned criminality with the police in hot pursuit!

Book Sample
It was the dead of night.  A biting wind chased through the streets and squares. Sparse leafless trees braced and bent in the gusts. Under street lights, restless waving limbs caste unearthly shadows.

But Amanda didn't. She lay crumpled in the shadows at the foot of the building where she had fallen, her body twisted and broken. Her vision was blurred. She tried to focus, tuning into the primitive instinct to survive. Her gaze took in the dizzying rise of the facade above her and her eyes settled in horror on the balcony above her from where she had just dropped.

Screwing up her eyes, she willed her limbs to move, but nothing responded. Her chest fired up with pain at every gurgling intake of breath. She mustered a cry for help but managed just a whimper. She tried again and a hoarse scream was carried away in the wind. Above she heard the sound of the front door opening. He was coming out to find her!

Shoes scruffed the top step. The pounding of her heart pulsed in her head, getting louder and louder, as shock gave way to mortal fear. Terror and pain gripped and overwhelmed her.  She had been brave, but it couldn’t go on forever. Her last thought before she blacked out was that he was coming to finish her off.

Beams of light swung from the road and pierced the gloom. An engine, muffled voices. The intruder froze momentarily, still carrying the poker he had swung.  He bolted down the steps, ducked into a side alley and was gone.