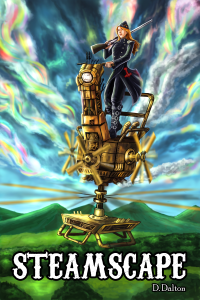 In a world powered by steam, shredded by a civil war between the country’s largest corporation and the government, with millions trapped on either side, our hero, Solindra Canon is reading fashion magazines.

It’s not her fault. She’s never been away from the little waystation in the mountains, and her entire world is the people passing through on trains, who often abandon their newspapers and magazines. That world violently disintegrates the day that a Reaper steps out of the passenger car. She’s been in hiding her entire life; she’s just never known it.

The only people she’s known are suddenly strangers, even her late father, as they reveal the secrets they’ve kept from her all this time. The world away from the waystation also turns out to be a horrible caricature of the stories told in those magazines. It is a much darker place. The civil war is eating through the hearts, homes and hopes of all the citizens, and there’s something called Killing Trains sweeping the countryside. Even Solindra’s idol, the one shining star she has held sacred, is nothing like she had dreamed.

It’s time to grow up. It’s time to learn and act on why she is such a threat to both the corporation and the government just by existing.

This steampunk adventure is a bittersweet tale growing up in war and doing what is right no matter how impossible it seems; a story of sacrifice, devastating choices, betrayal, redemption, alternative history technology and of course, impeccable fashion.

Link To Buy Steamscape on Amazon