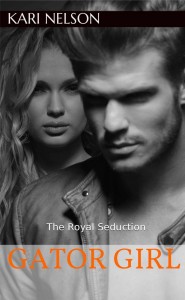 This is the start of the series and the entire series will have you twisted up in knots and full of raging emotion. Don’t let the title fool you! It is intensely gripping and mind boggling until the very end. This LOVE and HATE TO THE EXTREME!

A crazy tailspin, steamy tale of WTF is happening as young University of Florida Student, Kelsey Aimes is at first in love with the wrong man and then meets HRH Prince Stephen Lyons. He has it all and expects women to fall at his feet and obey his every command. Resistance seems futile by account of the many other women who have fallen prey to HRH, but then Kelsey wants love and Prince Stephen only wants to play.
Kelsey has fallen into a world of Royals and she is trying to compete in a level above her station.
Pay close attention and uncover the mysteries that abound between Stephen and Kelsey. Their love is for the ages and it all starts here.
This Series told in 7 books is a rollercoaster of fun that begins in the parking lot, getting out of the car and ends with a thrilling ride that will blow your mind. It has lots of cray-cray and drama suspended in the world of Royals.

Kelsey uses profanity A LOT and the story is told from her point of view, so be forewarned.

Kelsey is lured by the chance at revenge from her small town of Gainesville, Florida when her best friend Tracy betrays her in one of the worst ways possible. At first Kelsey takes it all in stride and never says a word to Tracy about her hurt feelings… until Kelsey’s father makes her an offer that she can’t and won’t refuse.

Heartbroken and desperate for revenge, Kelsey moves to the biggest little city in the world – New York City under the guise of a placement in a highly coveted apprenticeship and she moves in with Tracy – that in itself is full of drama, but there is much more on the horizon. Kelsey really needs her big girl panties, because no one and nothing is as it seems especially Kelsey’s two brothers- Teddy and Philip.

She has been estranged from her brothers because they attended boarding school in England most of her life at the insistence of her British born father. Now being reacquainted back into their lives is an adventure of sex-crazed intrigue and drama, drama, drama!

Then enters HRH Prince Stephen Lyons into Kelsey’s tumultuous life to further turn everything topsy-turvy! He is a good friend of her brothers and from his and Kelsey’s first encounter… he totally takes over her heart, body and soul -and he is in complete command. He is alpha everything and he is used to everyone bowing to do his bidding, but not Kelsey… She refuses to be suckered in by Stephen. But continuing to fight against Stephen’s heavy pursuit of her may be more difficult than she thought.

This is a romance built around the drama of the Royals of society. Oh, you will want to be Royal when you discover how they live dripping in wealth and wielding their power -It is just as natural as breathing for them.
Book 7 soon to be released and it ends the powerfully gripping saga that will have you begging for more as you engross yourself into their lives of deceit, lust and power. No one is unscathed and all is fair game. You won’t want to miss it.

Link To Buy Gator Girl: The Royal Seduction on Amazon