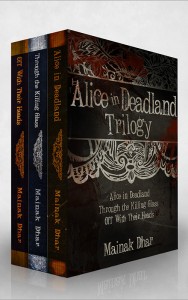 Alice in Deadland was released in November 2011 and quickly became an Amazon.com bestseller, selling more than 50,000 copies in its first three months. It was followed by its sequel, ‘Through The Looking Glass’ and ‘Off With Their Heads’, the prequel to Alice in Deadland. Now, get all three novels in the Alice in Deadland Trilogy in one single omnibus edition and immerse yourself in this bestselling adventure.

Civilization as we know it ended more than fifteen years ago, leaving as it’s legacy barren wastelands called the Deadland and a new terror for the humans who survived- hordes of undead Biters.

Fifteen year-old Alice has spent her entire life in the Deadland, her education consisting of how best to use guns and knives in the ongoing war for survival against the Biters. One day, Alice spots a Biter disappearing into a hole in the ground and follows it, in search of fabled underground Biter bases.

What Alice discovers there propels her into an action-packed adventure that changes her life and that of all humans in the Deadland forever. An adventure where she learns the terrible conspiracy behind the ruin of humanity, the truth behind the origin of the Biters, and the prophecy the mysterious Biter Queen believes Alice is destined to fulfill.

A prophecy based on the charred remains of the last book in the Deadland- a book called Alice in Wonderland.

Through The Looking Glass: Alice in Deadland Book II

More than two years have passed since Alice followed a Biter with bunny ears down a hole, triggering events that forever changed her life and that of everyone in the Deadland. The Red Guards have been fought to a standstill; Alice has restored some measure of peace between humans and Biters; and under Alice, humans have laid the foundations of the first large, organized community since The Rising- a city called Wonderland.

That peace is shattered in a series of vicious Biter attacks and Alice finds herself shunned by the very people she helped liberate. Now she must re-enter the Deadland to unravel this new conspiracy that threatens Wonderland. Doing so will mean coming face to face with her most deadly adversary ever- the Red Queen.

Off With Their Heads: The Prequel to Alice in Deadland

A few months before Alice was born and fifteen years before the dramatic events depicted in Alice in Deadland, there was The Rising. A few days that destroyed human civilization as we know it, reducing much of the world to a radioactive wasteland teeming with hordes of undead Biters and controlled by a shadowy Central Committee.

Off With Their Heads brings to life the final harrowing days of The Rising through four shorts, each depicting events through the eyes of one pivotal character in the Alice in Deadland series. See how Dr. Protima became the Queen of the Biters; feel the pain of a young man’s sacrifice as he becomes the bunny-eared Biter whom Alice later follows down a hole; follow the rise of Chen from a conflicted young Chinese Army officer to a General in the Red Guards; and finally share in the dramatic escape of Alice’s parents from a city overrun by Biters.

Link To Buy Alice in Deadland Trilogy on Amazon