You are here: Home / Fiction / Backwards Into The Future by Bronwyn Elsmore 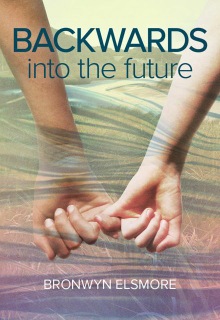 You can’t go back, her friends say, but Mary has to do it.
That’s because of two people from the past. One is pushing her, the other is holding back, and between the two women there’s much to be resolved.
The plum tree and the manuka have gone, but a lemon tree thrives. The mystery surrounding the boat with painted eyes may never be solved; but perhaps some things from the past can be recovered.

What Inspired You to Write Your Book?
The story that’s the basis of this novel has been with me a long time, actually decades, and I knew one day it would be written. It is fiction, not autobiographical, but the setting is very real to me for the small town where it is set is based on the one in which I grew up. The writing brought back many memories and feelings, and in the process I went through many emotions – laughter, sadness, feelings of gratitude and loss.
Readers with similar backgrounds have said that for them it’s like a memoir and triggered nostalgia for them too.

How Did You Come up With Your Characters?
Though they are fictional, they are the sort of people who lived in my small hometown as I was growing up. During the writing they became real people to me – I heard them and saw them, and came to love them.

Book Sample
The town had its fair share of characters. Perhaps all small towns do. Or maybe they are more obvious in little places where they can't disappear among the mass.
Characters like old Miss Purdey!
Not that she was often called Miss Purdey. Either Miss Purity,or Miss Prudey, was what she usually got – sometimes even to her face, as people forgot her real name. The lady herself probably wouldn't have minded the alternative – Miss Purity, at least. On the odd occasion when she was addressed as 'Mrs' – obviously by someone new in town – she quickly put them right.
"It's Miss, I'll thank you to know."
On one occasion, so the story went around – and it certainly did go around – she added some elaboration.
"It's Miss, I'll thank you to know. I've been a good girl all my life."
Then there was old Bottler Bob. Few people knew his surname – he was only ever known as Bottler Bob. Bob walked around Waimamae, Monday to Saturday, but on Sundays too if there was any special event occurring, pushing a wheelbarrow and collecting bottles. Clear glass soft drink bottles went straight to the cordial factory to be exchanged for coins. With the barrow stacked full of brown beer bottles, Bob would go to the back door of the pub and cash them in. Then he'd walk around to the front door and spend his earnings on beer, specifying he wanted it served in the bottle, not by the glass. When he'd finished drinking, he'd collect his empties from the side table where he always sat, plus any others left behind elsewhere, and take them out with him. Once outside, he'd place them in the wheelbarrow waiting by the door. With the new bottom layer already begun, he'd pick up the barrow and start his rounds again.

Buy Backwards Into The Future On Amazon